Mother forced to leave newborn in intensive care because of US maternity leave: ‘This. Is. America’ ? 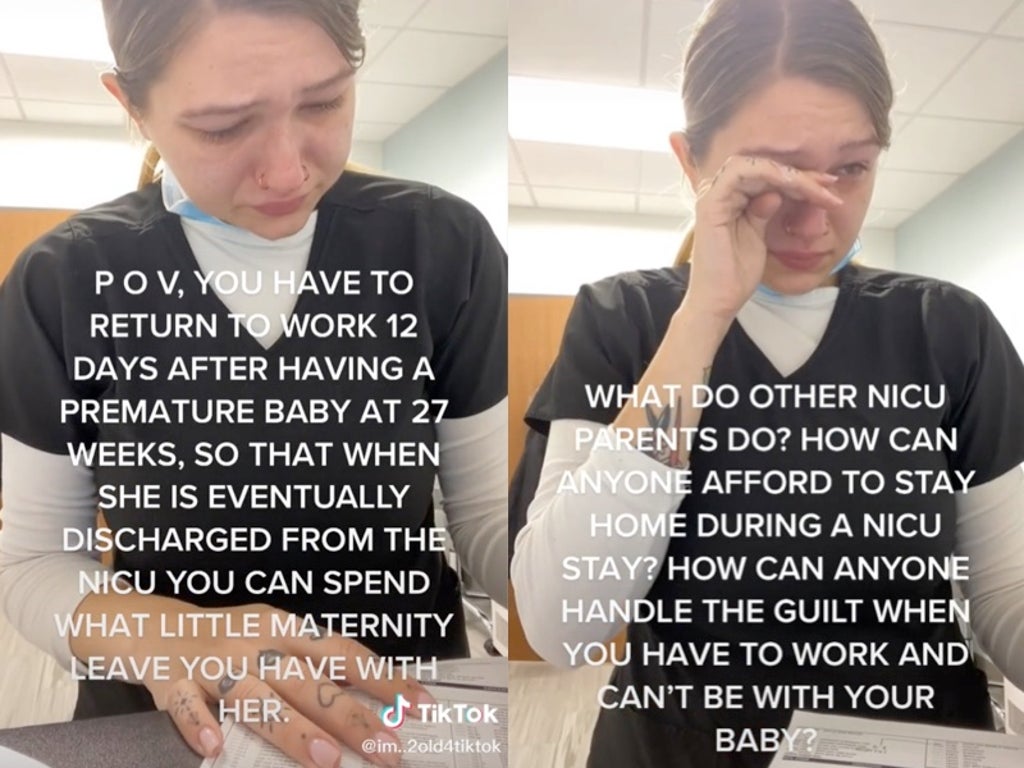 A new mother has detailed the heartbreaking realities of parenthood in the US after revealing that she had to return to work 12 days after giving birth to her premature baby so that she could save up her maternity leave.

Rebecca Shumard, who goes by the username @edensmomma10_12 on the app, described the difficult situation she was facing over the small amount of family leave for new parents in the country in a video posted last month.

In the clip, Shumard, a medical assistant/exercise physiologist, can be seen crying while dressed in scrubs at work, with the new mother revealing that she had to return to work 12 days after having a premature baby at 27 weeks so that she would be able to spend her maternity leave with her newborn daughter Eden when she is eventually discharged from the Neonatal Intensive Care Unit (NICU).

“POV: You have to return to work 12 days after having a premature baby at 27 weeks, so that when she is eventually discharged from the NICU you can spend what little maternity leave you have with her,” Shumard wrote.

The 26 year old also revealed that she was trying to pump breastmilk at work every three hours, but was struggling because of how understaffed her employer was.

“Your milk supply is diminishing at eight weeks postpartum,” she continued. “Will you even have milk available when she gets home?”

Shumard then asked other parents of premature babies for advice, with the new mother questioning what “do other NICU parents do? How can anyone afford to stay home during a NICU stay?”

Shumard also acknowledged the guilt she, and other parents must feel, over having to work rather than be with their newborns, writing: “How can anyone handle the guilt when you have to work and can’t be with your baby?”

“This. Is. America,” the new mother concluded.

In the US, women are allowed up to 12 weeks of unpaid leave annually if they work for a company with 50 or more employees, as outlined under ​​The Family and Medical Leave Act of 1993. However, unlike most countries, family leave is not federally mandated, and usually allows for just six to eight weeks.

In a follow-up video, Shumard acknowledged that the time allowed for new mothers, which she said is “not enough,” also depends on whether they had a vaginal birth or a C-section, and that the time off is usually unpaid.

According to Shumard, she used two weeks of her maternity leave when her daughter was born, but wanted to save the rest for when Eden was released from the hospital.

In response to her initial video, which has been viewed more than 2.8m times, numerous viewers shared their own experiences struggling with the small amount of family leave in the US.

“I feel for you. I went through the same thing 18 years ago, nothing has changed. I went back to work 10 days after a C-section. It’s not fair!” one person wrote, while another said: “I had to go back to work 14 days after having my daughter at 28 weeks. She was in the NICU for 59 days. It’ll pass but I know this pain. Stay strong.”

Others expressed their horror over the situation, with someone else writing: “I’m so sorry. Healthcare, and maternity leave in the USA are vile and inhuman. I’m so sorry.”

In addition to the messages of support, the viral video also prompted many to send money to help Shumard, which she expressed her gratitude for in her follow-up video.

In another follow-up video, Shumard revealed that all of the help she received had allowed her to take the time off work to spend with her daughter in the hospital without worrying about bills.

“TikTok, because of you, I will not be forced to choose between being with my daughter in NICU or paying bills,” she captioned a video of herself rocking the newborn. “I am eternally grateful.”

According to Shumard, who has continued to update her followers on her daughter’s progress, after 72 days in the hospital, Eden was finally allowed to come home.

While speaking with Yahoo, the new mother revealed that her experience was vastly different from what her expectations of maternity leave had been, as she explained that she had thought: “This is the time to spend with your baby, and it’s going to be obviously a learning curve. You spend those short six weeks with them, if that’s what it is that you get, and during that time you are creating a schedule that works for the baby that changes daily, hourly.”

Christian Wakeford explains his decision to defect to Labour