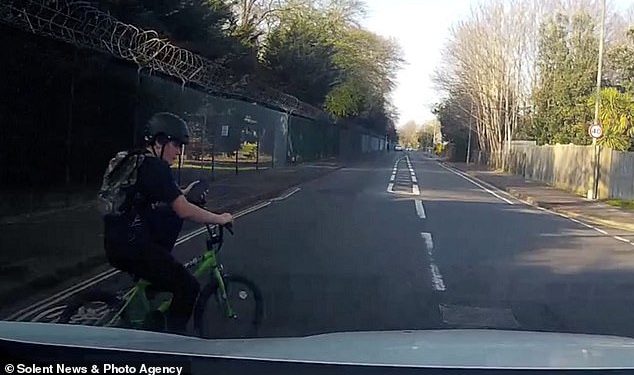 A heart-stopping near miss between a schoolboy cyclist and a car is captured in shocking dash-cam footage, with the driver having to swerve into the opposite lane as the boy veers into the road while looking at his phone.

Martin Deem was left thanking his quick reflexes after the youngster wheeled his bike out in front of his car without looking up.

Luckily, the 56 year old managed to dramatically swerve around the young cyclist by ‘a millimetre’ while also dodging cars coming in the other direction. 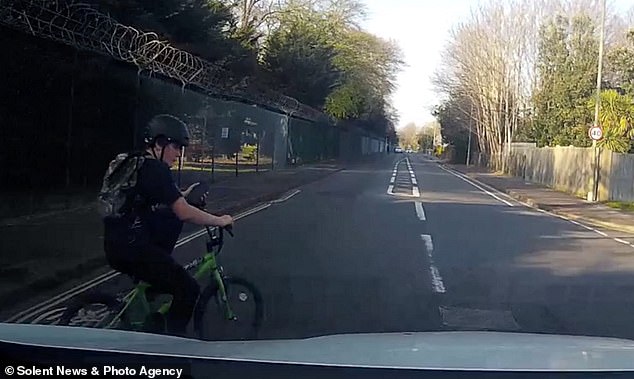 This is the shocking moment a young boy, pictured, pulled out in front of motorist Martin Deem, who was forced to swerve out of the way to avoid the youngster 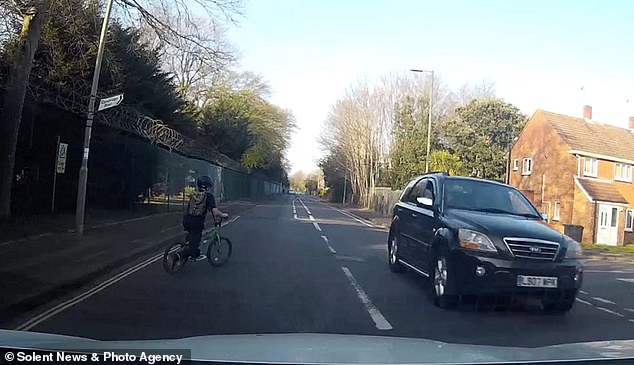 He had been driving below the speed limit along the 40mph Military Road in Portsmouth, Hampshire, with his wife and two teenage children also in the car.

Mr Deem’s dash-cam footage captured the moment he suddenly swerved the family’s Vauxhall Mokka into the opposite lane to avoid crashing into the boy.

The marine upholsterer said: ‘As you can see from the video it was driving down Military Road, which is a 40mph road. ‘I see this kid on the bike and I thought “he could do something”.

‘Because I was aware of him I was quick to react.

‘If I had put the brakes on I would have still hit him. I needed to swerve. I think a few years as a motorcycle courier travelling to London a few times a week helped with my reactions and reflexes.

‘There was a millimetre between us.’

Mr Deem, from Gosport, Hampshire, pulled over to check the boy wasn’t shaken up by the near-miss – but he had already scooted off down another road. 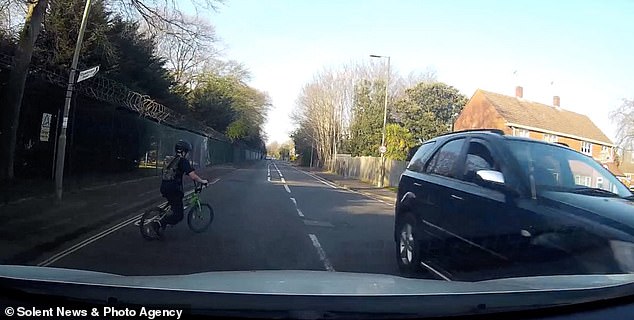 Mr Deem, who is from Gosport, Hampshire, said the child may have been embarrassed by his lapse of judgement

He said: ‘I think he was embarrassed.’

His wife, Theresa Deem, later posted the footage of the March 27 near miss to social media in the hope it would teach others to be more careful when using the road.

The 48 year old HR assistant said: ‘The boy was completely oblivious to us. We were all a little shaken.

‘I am so glad it was Martin driving and not me. I could be doing myself an injustice but I think my reactions may have been different to his.

‘I do dread to think what could have happened. I’m so glad the outcome was what it was as it could have been a devastating day for one family.

‘It made us say to our children, ‘we cannot reiterate enough how important it is to be aware of your surroundings’.

‘Please can everyone teach our children better road safety.’

The road has seen a few near misses with school children crossing between parked cars, according to Mr Deem.

He added: ‘The road is fine, the speed is fine. It’s just people need to be more aware.’

Portable, Picturesque but Not Quite Perfect