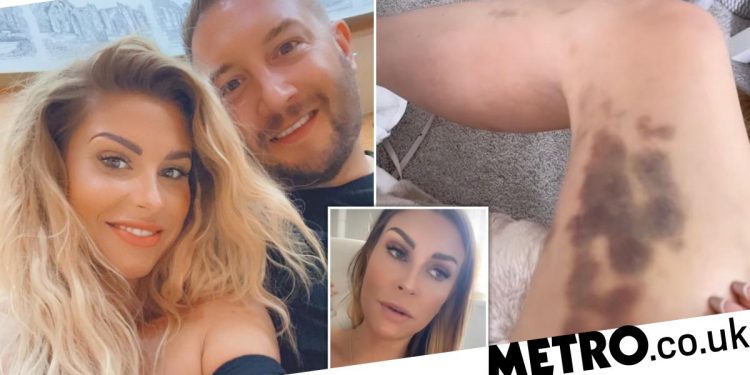 
Mrs Hinch has opened up about her blood disorder, showing the bruises that develop as a result of it.

The queen of clean spoke out about her thrombotic blood clotting disorder, which means her blood clots very easily – and causes her skin to also bruise easily.

Sharing a photo of her bruised leg on Instagram, the star – real name Sophie Hinchliffe – wrote: ‘Typical that the sun is out and my blood plays up.

‘THIS is why I wear winter clothes in summer guys. I get so worried about going out when it’s sunny! My arms are the same too at the moment.

After fans expressed their worries for her, Sophie, 32, explained the disorder, adding: ‘I’m covered in [bruises] all the time basically.’

Sophie, who has a following of more than four million on Instagram, shares insights into her life with her husband Jamie and their kids Ronnie and Lennie.

Earlier this year, they moved into a gorgeous new home after a dispute with neighbours forced them to move.

Sharing her hopes for the new property, the star posted a video of a section of the house which she plans to turn into a utility room – an essential for the queen of clean!

Sophie’s got big plans for the place as she opened up about knocking down walls, before showing off a huge room that is destined to be a playroom for little Ronnie and Lennie.

‘I can’t wait to do this project,’ she wrote of the soon-to-be playroom. ‘This will be one of the first rooms we tackle! It’s a beautiful space for the boys and I love the vertical windows. This used to be a snooker room – Jamie was slightly disappointed.’

We can’t wait to see!


MORE : Mrs Hinch reveals privacy war with neighbours forced family to move house: ‘I felt like I lost my home and I was in a really low place’