Images from KABC showed firefighters responding to the flames at multiple houses scattered across the neighborhood, specifically in the Aliso Woods Canyon area.

In one neighborhood, footage from affiliate KCBS/KCAL showed flames swallowing entire homes and burning through to their interiors while firefighters hosed down nearby houses on the same street hoping to save them.

The vegetation fire broke out Wednesday afternoon, according to the Orange County Fire Authority.

The flames were fueled by gusty winds that reached up to 30 mph in the area, according to nearby observations from the National Weather Service. That is in addition to dry conditions from an ongoing severe drought in the entire region, according to the latest US Drought Monitor. 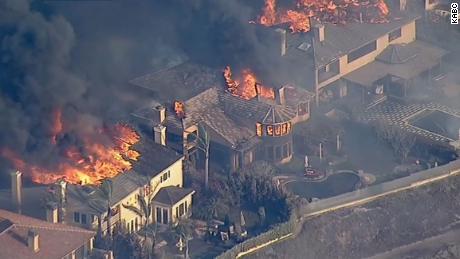 Roughly two hours after it started, the blaze had grown to at least 150 acres, the authority said Wednesday evening. “We have over 60 different types of resources battling the flames,” it added.

There are evacuation orders issued for Coronado Pointe Drive, Vista Court and Via Las Rosa in the Pacific Island area of Laguna Niguel, and a reception area for those who evacuated at the Crown Valley Community Center, the Orange County Sheriff’s Department said in a news release.

“I walked down to the shopping center below and the smoke grew maybe two to three times what it was before,” she said.

Video recorded by McCoy shows smoke billowing from behind the hills, where Laguna Niguel is located. Other videos from nearby areas also show thick gray and brown smoke clouds near the residential areas.

CNN’s Sharif Paget and Brandon Miller contributed to this report.