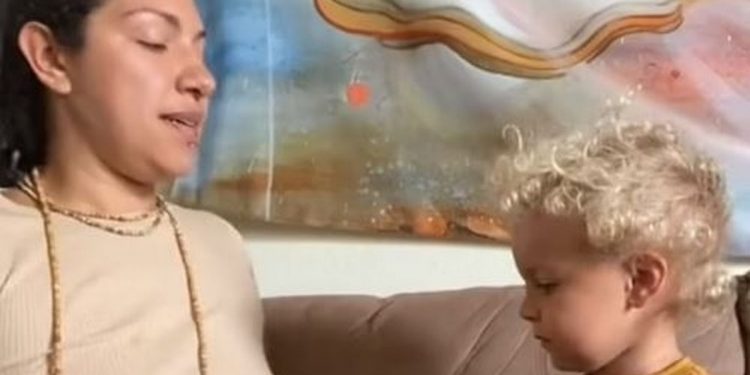 
A mum has stirred debate online after showing how she teaches her toddler son of “boundaries” when she breastfeeds him.

Mikaela de la Myco, from California, extended breastfeeding her two-year-old child, Marten, and recently took to TikTok asking for opinion when she demonstrated how she set boundaries for her son.

In the video, the parent asks her son if she wants milk and asks “Where do your hands go?”

Little Marten quickly places his hands on his knees and waits for his mum asking: “Which one?”

He points at her left breast and Mikaela signals her with hand gestures, indicating him to be patient.

Mikaela notices Marten’s “annoyed” look and says they are “still working on it”.

When she is ready and tells Marten to “go ahead”, then she asks him again if he wants to switch to drink from another breast.

“Honestly, I know this probably looks weird to a lot of people, but I almost quit bf [breastfeeding] because this was so hard to accomplish without any good extended breastfeeding models,” she wrote at the end the video.

“Is this ‘gross’ to you? The problem didn’t start until Marten became a toddler, what do you think?”

Some mothers said Marten is “too old” and shouldn’t be nursing at that age.

One said: “I think he’s too old… just my opinion — I feel like at that stage it’s more for you not wanting to let go [than] his benefit.

“That could be harmful later.”

A second added: “I feel he is old enough to drink out of a sippie cup, why not just pump?”

Another shared their own experience, saying: “I was breastfed until I was three, it taught me to eat, to calm down…I struggled (and still do) with overeating in stressful situations my entire life.”

Others appreciated Mikaela for teaching her son about consent, with one commenting: “It’s beautiful and you’re nourishing him.

“He looks vibrant and radiant, I think you’re doing a wonderful job.”

Another didn’t see extended breastfeeding as a “gross thing” and said it’s just uncommon and new to the mainstream.