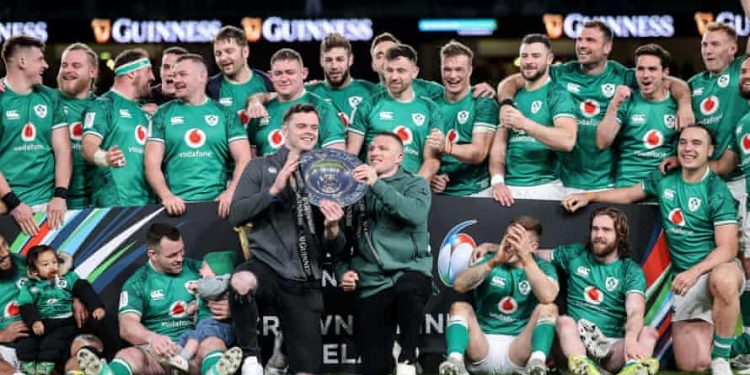 
A Triple Crown, a bonus point in every round, whichever way you look at it, Ireland continue to develop impressive momentum. Here, they were too powerful for a visiting Scotland side who played with all the brio and pace we have come to expect – but without the heavy-duty weaponry that lifts Ireland into a category above.

Scotland played in devil-may-care mode, another championship long gone, a new playmaker at fly-half and nothing to lose. Nothing to win either, bar maybe a victory far too late, but they are never less than dangerous these days. Their slashes and parries, though, could not break Ireland’s skin. And Ireland knew how to break theirs.

They had to wait till the death to register that fourth try, but no one was surprised when it came. Ireland’s game was spearheaded by some ferocious forwards, particularly yet another bristling hooker for the future in Dan Sheehan. The balance of, well, power when the game crept into charging distance of either tryline was firmly in their favour.

The modern narrative between these two resumed pretty much from the kick-off – that is to say that Scotland slashed with their rapier, to which Ireland responded with a bludgeon. That may be a crude summary – Ireland certainly know how to deploy sleight of hand when the situation demands – but when it comes to the brutality of the close quarters in what people love to refer to these days as the Red Zone, Ireland could resort to some brutal weapons.

Hence their early 14-0 lead, despite some exhilarating approach work from their visitors, who had held the edge in possession. The trouble with the rapier is that it requires a higher level of accuracy to make tell. Darcy Graham is about as rapier-like as any international player. He slashed this way and that, as did Ali Price, as did Hamish Watson, small and darting all of them. Pierre Schoeman is not so little and he found himself in space too early on. Nothing of substance came from any of it.

Then Ireland had a go. Jamison Gibson-Park wielded his own rapier, which Stuart Hogg dealt with masterfully, but soon some flashing hands by Ireland’s backs created an attack down the left. Over to the bludgeon.

A penalty was sent to the corner, the lineout secured and towards the end of the first quarter Sheehan broke off the maul to the line. Ten minutes later, another lineout and another charge by Sheehan set Ireland up for some more boshing. Cian Healy was the next to barge to the line.

Scotland were exasperated to find themselves 14-0 down with half an hour gone, but they responded. Graham was off again down the right after flashing Scottish hands released him, then Watson slipped a fabulous ball to Schoeman, Graham darted again – the usual suspects – off an inside ball from Scotland’s new fly-half, Blair Kinghorn, and moments later, Schoeman burrowed to the line.

Kinghorn was looking elegant at No 10. And if anyone in these parts can hoof a ball as far as Hogg, he is that man. Alas, his conversion was not so great, so Scotland went in 14-5 down at the break. They knew they had to be the first to score after it.

They duly created the clearest-cut chance and they missed it. Hogg and rapier are basically synonymous, but he has history here of missing precious opportunities. He was clean through on the last man, with Chris Harris and Kyle Steyn free inside him, and he went for the corner himself – in vain.

The moment was overshadowed by the latest trial by TMO of an incident earlier in the passage of play. Happily, Wayne Barnes, ever the most reasonable of referees, resisted any temptation to take action against Schoeman for his collision with an upright tackler. A let-off for Scotland some will no doubt argue, but the greater let-off in that particular passage was for Ireland.

They took advantage on the hour. Scotland managed to thwart one attacking lineout, but they set up another after Scotland were penalised at their own scrum. Mack Hansen combined with James Lowe, and Ireland were in a position to bludgeon. But it was a smart switch pass by Gibson-Park that released Josh van der Flier to burst through the last tacklers.

Scotland did have further chances in the final quarter, but they could not locate the wherewithal – for which read power – to make it tell. Conor Murray’s barrelling run through three tacklers off Lowe’s pass out of a maul completed yet another maximum haul for Ireland.