My dad and I post naked photos together on OnlyFans 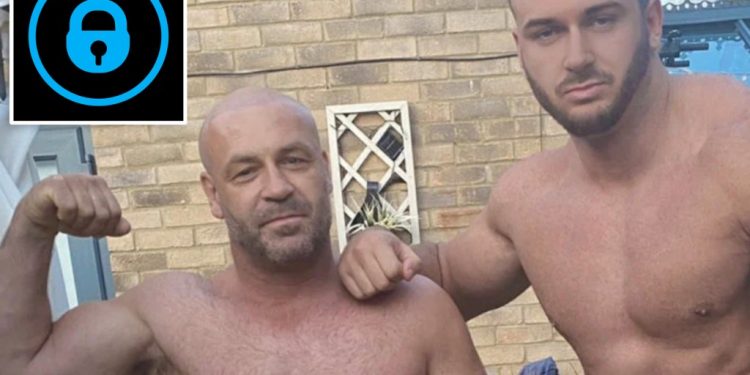 A father and son are making a fortune on OnlyFans sharing naked photos of themselves hanging out together.

Jake Herbert, 26, started his own OnlyFans account several years ago and told the BBC he was making up to $9,000 USD per month posting nude pictures of himself.

But the kinky content creator was determined to make even more money — and found an unexpected opening after sharing a photo of his handsome dad with fans.

“Obviously, I knew that to take this to the next level I had to do something that would get everyone talking,” the UK resident said. “I put a picture of my dad up, just us topless after a workout, and it just went mental.”

The bold Brit asked his father — who hasn’t been publicly named — whether he’d strip down further for a share of some OnlyFans cash.

The monetary benefits proved too tempting to turn down, and the dad was soon joining his son in some steamy snaps strictly available for followers who fork over a fee.

The patriarch — whose age has also not been disclosed — still keeps his main job as a plumber, but some of his co-workers are confused about his rather unorthodox new side hustle.

“He was getting bits of banter and that from where he was working,” his son explained. “And I was like, ‘Look, dad, we just need to make some money. It’s not like we’re doing anything.’”

Last year, Herbert told the Tab he hasn’t even seen his father’s private parts, claiming he keeps his eyes averted as they pose up a storm for the camera.

“We’ve never seen each other naked, the most he’s shown on my page is his a–,” the savvy son claimed.

“Furthest me and my dad would go is … well, you’ll have to subscribe to see!” he added.

At the time, Herbert claimed he had a girlfriend who wasn’t fazed by the odd father-son bonding activity. In fact, the lady love was supportive because the enormous income helped fund their lavish lifestyle.

Herbert told the BBC he now rakes in around $40,000 USD per month and gives his father a small cut of the cash.

Beyond Chicken? KFC to Serve Up Plant-Based Meals

Beyond Chicken? KFC to Serve Up Plant-Based Meals