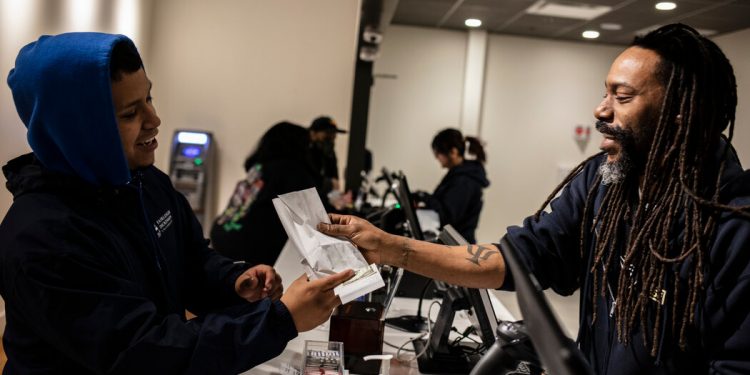 The customers began lining up before dawn at Rise Paterson, a marijuana dispensary in New Jersey that was welcoming customers with free doughnuts and reggaeton blaring from loudspeakers.

As New Jersey kicked off the state’s first legalized sales of recreational marijuana on Thursday, Rise, along with roughly a dozen other medical marijuana dispensaries across the state, opened its doors to customers 21 and older for legal sales.

“I’m just excited that everything is opening up legally,” said Daniel Garcia, 23, who arrived at 3:30 a.m. and was first in line after driving 25 minutes from his home in Union City, N.J.

After enjoying a front-row view to the dispensary’s ribbon-cutting, Mr. Garcia, who previously bought his marijuana from a dealer, stepped up to a customer kiosk in Rise’s gleaming new space and selected a brand called Animal Face and a potent strain called Banana Cream, which he then picked up from uniformed staff members.

“I’ve never had them, so I’m giving it a try,” he said. “I’m very picky when it comes to my weed, and sometimes I ask my guy, ‘Which one is good?’ and it’s not always accurate. I like coming to dispensaries because I know for sure that what they’re telling me is accurate.”

Under the state’s new laws, recreational cannabis customers can legally buy up to an ounce of marijuana per sale for smoking; or up to five grams of concentrates, resins or oils; or 10 packages of 100 milligrams of edible items.

Jeff Brown, executive director of the Cannabis Regulatory Commission, which oversees licensing, growing, testing and sales of cannabis in New Jersey, cautioned buyers to expect long lines at first, and to “start low and go slow” with their purchases and consumption.

It is illegal under state law to possess more than six ounces at any time, and illegal to drive while high on marijuana. Also, because federal law still bans marijuana possession, buyers in New Jersey cannot legally transport it outside the state.

Some marijuana advocates were eager for sales to begin a day earlier, on April 20, an unofficial cannabis holiday.

But there were concerns among regulators and industry representatives that with only 13 fully approved locations to serve thousands of customers across the entire state, a large turnout might overwhelm those centers, perhaps causing traffic and parking problems as well as unmanageable lines.

“Selecting 4/20 for opening day would have presented unmanageable logistical challenges for patients and other buyers, surrounding communities, and for municipalities,” Toni-Anne Blake, a spokeswoman for the commission, said.

Instead, 4/21 was the culmination of a yearslong effort to legalize marijuana in the state.

In November 2020, state voters approved a referendum legalizing marijuana, and the State Legislature legalized it in 2021. That was followed by months of creating industry regulations and licensing applicants to open dispensaries.

The first approvals for recreational sales were issued to medical marijuana dispensaries, which have been permitted for years to sell to buyers with medical permission and are often owned by large cannabis corporations.

Scores of smaller cultivators and manufacturers have received state-issued conditional licenses in the past month, but have yet to set up shops and get approvals from local municipalities.

One early-rising customer on Thursday, Greg DeLucia, a media executive, said he used to buy his weed in sketchier settings.

“My dealer,” he said, “was a guy with four teeth named Bubbles.”

Now he was waiting outside the Rise dispensary in Bloomfield, N.J., across Bloomfield Avenue from a chiropractor, hair salon and other storefronts.

It was a far cry from Bubbles the dealer. Greeters handed out pastries from a blue food truck in the parking lot run by Glazed & Confused, a dessert company. Cheerful dispensary workers wearing laminated company badges welcomed customers entering under a balloon archway while a steel drummer played pop hits.

Mr. DeLucia said he most recently had been driving to Massachusetts, where recreational marijuana was already legal, to make his purchases. But on Thursday, he said he made a 12-minute drive from his town nearby, armed with a “shopping list” from his wife.

Another customer in Bloomfield, Christian Pastuisaca, consulted the offerings and placed his orders on a touch-screen kiosk. He walked out with a white paper bag containing an eighth of an ounce of indoor-grown marijuana in a small black jar, costing just over $60.

Its THC content was “really high,” he said, perfect for the “euphoric” smoking experience he likes.

Supporters of legalizing recreational marijuana lauded the new jobs and tax revenue it would bring to the state. There was a social justice premium as well: fewer marijuana arrests disproportionately affecting people of color.

Much of the cannabis sales taxes will go toward Black and Latino neighborhoods historically affected by marijuana-related arrests. There will also be a “social equity excise fee” to fund initiatives addressing racial and economic injustice.

“This could be the beginning of a green rush,” said Mayor Andre Sayegh of Paterson, the largest city in New Jersey to see legal recreational sales begin on Thursday. Shops in the larger cities of Newark and Jersey City have not yet opened.

Mr. Sayegh said that Paterson enacted a public safety plan to keep order in the early days of recreational sales, and that it would allow its off-duty police officers to work as security officers at the dispensary.

The Paterson City Council voted last year to ban recreational marijuana businesses in the city, but the mayor vetoed the decision, paving the way for legal sales.

Mr. Sayegh said he did so because recreational marijuana dispensaries would result in more local jobs and eventually generate revenue “in the millions,” once the city imposes local taxes on recreational cannabis sales.

But opponents of legal marijuana have expressed concerns about the possible dangers of legalizing recreational marijuana.

Nick DeMauro, a former police detective in Bergen County, N.J., said the legalization of recreational marijuana could be “sending a mixed message to young people saying, ‘If adults can do it, why can’t we?’”

Another concern is the difficulty in policing dangerous driving by marijuana users because “it’s hard to measure if someone is under the influence,” said Mr. DeMauro, who runs Law Enforcement Against Drugs & Violence, a group that assists police departments in educating people about the dangers of marijuana use.

“We need to look at this with extreme caution,” he said. “You’re legalizing a psychoactive substance with major issues and we need to keep our communities safe.”

Does Deebo Samuel not want to live in California? – NBC Sports