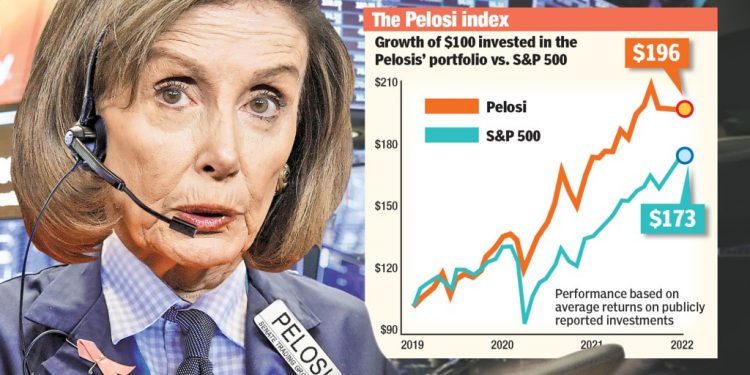 
Nancy Pelosi is scrambling to quash bipartisan efforts to ban stock trading by Congressional lawmakers — even as she and her husband have raked in as much as $30 million from bets on the Big Tech firms Pelosi is responsible for regulating.

Late last month, the House Speaker disclosed that the Pelosis scooped up millions in bullish call options for stocks including Google, Salesforce, Micron Technology and Roblox. At the same, some insiders say she has slow-walked efforts to rein in Big Tech.

Days later, Pelosi brushed off worries over stock picking by lawmakers, claiming it was part of the “free-market economy” — comments that made Democratic insiders “blood boil,” people close to the speaker told The Post.

“Key policy makers can be rich but they shouldn’t own individual companies,” Jeff Hauser, a self-proclaimed progressive Democrat and founder and director of the Revolving Door Project, told The Post.

Stock picking by elected officials “gets worrisome about whether legislators have access to insider information or whether your stock purchases will consciously or unconsciously impact policy making,” Hauser added.

Pelosi is one of the richest members of Congress, with an estimated net worth of more than $106 million, according to an analysis by The Post. That’s an average of the maximum and minimum estimated value of her assets and liabilities — the methodology used by the Center for Responsive Politics — using her most recent financial disclosure from August, which pegs the maximum at $252 million and the minimum at $40 million underwater.

Pelosi’s husband, Paul Pelosi, is a businessman who runs the venture capital and investment firm Financial Leasing Services and has made countless bets on high-profile companies his wife is supposed to regulate, like Amazon, Apple and Google.

The Pelosis split their time between a townhome in the pricey Pacific Heights neighborhood of San Francisco and a condo in the Georgetown neighborhood of Washington, D.C. They also own a Napa Valley vineyard that’s worth between $5 million and $25 million, according to required financial disclosure reports, which allow members of Congress to obscure their net worth by listing value ranges rather than precise figures.

In addition to Paul Pelosi’s recent round of trading in December, the couple has raked in millions from individual stocks over more than a decade.

While there’s no smoking gun showing that the Pelosis have traded using insider info, their portfolio has often outperformed the S&P 500, causing critics to question whether the speaker and other stock-picking politicians have the public’s best interest in mind when legislating.

Capital gains and dividends from their holdings in just five Big Tech firms — Facebook, Google, Amazon, Apple and Microsoft — reaped the Pelosis at least $5.6 million and up to $30.4 million between 2007 and 2020, according to an analysis of publicly available disclosures shared with The Post.

And the Pelosis’ overall portfolio — which has also included companies like Disney and Roblox — beat the S&P 500 by 4.9 percent in 2019 and a whopping 14.3 percent in 2020, according to data crunched for The Post by FinePrint, an outfit pushing for greater transparency of financial holdings on both sides of the aisle.

The Pelosis’ exposure to tech stocks, however, may have actually hurt them in 2021, when their portfolio underperformed the S&P 500 by 15.5 percent, according to FinePrint.

When asked whether the opportunity to profit on trades could create a conflict of interest, the speaker has flatly said “no” and has rejected the idea of a ban on trading individual stocks. Pelosi spokesman Drew Hammill did not dispute The Post’s findings that Paul Pelosi has generally outperformed the market but insisted that the trades are not an issue.

“The Speaker does not own any stocks,” Hammill told The Post. “As you can see from the required disclosures, with which the Speaker fully cooperates, these transactions are marked ‘SP’ for Spouse. The Speaker has no prior knowledge or subsequent involvement in any transactions.”

Walter Shaub, the former director of the United States Office of Government Ethics during both the Obama and Trump administrations, called this defense “absolutely insulting.”

“The idea that the stocks are in her husband’s name is a complete red herring,” Shaub told The Post. “Unless members of Congress are willing to wear microphones around the clock when they’re having dinner with their spouses and going to bed, the public has no way of knowing what information they intentionally or inadvertently shared.”

The Pelosis’ current holdings include between $5 million and $25 million of shares in both Amazon and Apple, as well as between $1 million and $5 million worth of Google stock options, according to their most recent disclosures.

“We should be held to a higher standard,” Rep. Michael Cloud, a Texas Republican who’s pushing two bills that would ban stock trading by members of Congress, told The Post. “When the public sees people in office profiting off [stock trading] when they’re struggling, it does a great disservice to everything that this nation should be about.”

Even though Pelosi’s district is adjacent to Silicon Valley, the Speaker has made moves to distance herself from Big Tech, including reportedly refusing to take calls from Mark Zuckerberg in 2019 after Facebook declined to remove a doctored video of her.

Earlier this year, she also seemed to praise antitrust legislation saying, “There has been concern on both sides of the aisle about the consolidation of power of the tech companies, and this legislation is an attempt to address that.”

But privately, Pelosi has continued her relationships with Big Tech executives. According to a New York Times report, Ms. Pelosi has spoken with Apple CEO Tim Cook about the legislation.

“The optics are terrible for her, for the party, and for Congress,” one Democratic insider told The Post. “And it raises serious questions anytime she takes action or doesn’t act on issues relating to holding these companies accountable.”

“It’s not a good look for the Speaker of the House to simultaneously profit directly from the companies she is supposed to rein in,” another source close to the situation told The Post.

Pelosi has conceded Members of Congress should follow the rules and report trades but insisted they should “be able to participate” in the stock market.

Under the STOCK Act, which was passed in 2012 and was supposed to rein in lawmakers’ trades, most members of Congress are still free to make the trades that could conflict with their legislative duties — as long as they disclose the information within 45 days.

The issue of congressional stock trading has taken on new urgency since the beginning of the pandemic, when suspiciously timed stock trades by lawmakers in both parties provoked outrage and led to multiple investigations.

Other supporters of bipartisan legislation to ban Pelosi-style trading by members of Congress include progressives like Sen. Elizabeth Warren (D-Mass.) and Rep. Alexandra Ocasio-Cortez (D-NY), as well as Republicans like Rep. Chip Roy (R-Texas) and Arizona Senate candidate Blake Masters.

While Pelosi receives extra scrutiny as the Speaker of the House, she’s far from the only member of Congress to trade shares of individual companies.

Former Georgia Republican Sens. Kelly Loeffler and David Perdue were both investigated by the Feds for alleged insider trading in 2020 ahead of their January 2021 election losses, and dozens of current lawmakers including Democratic Sen. Diane Feinstein and Republican Sen. Rand Paul have been dinged for failing to disclose trades on time.

In May, Democratic Sen. Ron Wyden of Oregon caught flak for pushing legislation to boost chipmakers while his wife — Nancy Bass Wyden, the owner of the Strand Bookstore in Manhattan — traded hundreds of thousands of dollars worth of shares in several chipmakers including Nvidia.

To date, no one has been charged in connection with STOCK Act investigations undertaken by the Justice Department and the Securities Exchange Commission.

The 2012 law was passed with bipartisan support in the wake of a stock trading scandal. Yet in the nearly 10 years since it was enacted, no one has been prosecuted under it even as many members continue to conspicuously trade.

In some recent cases, lawmakers have failed to report their trades altogether, as required by the law. And while some staff and legislators The Post interviewed have committed to avoiding buying or selling stocks while in government, hundreds more continue to make these trades.

A recent Business Insider investigation found at least 182 staffers and dozens of legislators were tardy in reporting their trades over the last two years. Some who were caught paid paltry fines as low as $200, while others were not punished at all. There is no government system that catalogs who erred.

“It’s not a political issue on the right-left spectrum, but a greed issue.” Shaub said.

Shopping is RISKIEST activity for getting Covid