NAR: Housing Market Is ‘Topping Out’ Due To Inventory Shortage


The housing market has been “amazing” during the last year, but it is beginning to show signs of “topping out” due to low inventory, according to Lawrence Yun, chief economist for the National Association of Realtors.

Yun spoke on Thursday during NAR’s Residential Economic Issues and Trends Forum on the second-to-last day of the trade group’s midyear conference, the Realtors Legislative Meetings, which has attracted some 15,000 attendees.

“What an amazing year for real estate,” Yun said, noting that despite the challenges of the pandemic, the economy is “very, very close to getting back to normal.”

“Vaccination is making great progress,” he said. “Overall, the economy’s returning. The housing market has been one star of the bright economy.”

After falling 9 percent year over year in the second quarter of 2020, annualized gross domestic product (GDP) in the first quarter of 2021 was at 99 percent of its pre-pandemic peak, according to Yun.

“The economy, believe it or not, is essentially back to full running,” Yun said. “In fact, the GDP will soon reach [an] all-time high for the simple fact that the personal income … due to the stimulus measure, it is substantially higher. People have been saving up their stimulus money and they will unleash this spending back into the economy. Easily, the economy will be surpassing the prior peak in [a] matter of days.”

Yun also anticipates some “revenge spending” on travel and restaurants from people eager to both go out and goose the economy. Yun predicted that GDP would rise 4.5 percent in 2021 after a 3.5 percent drop last year. 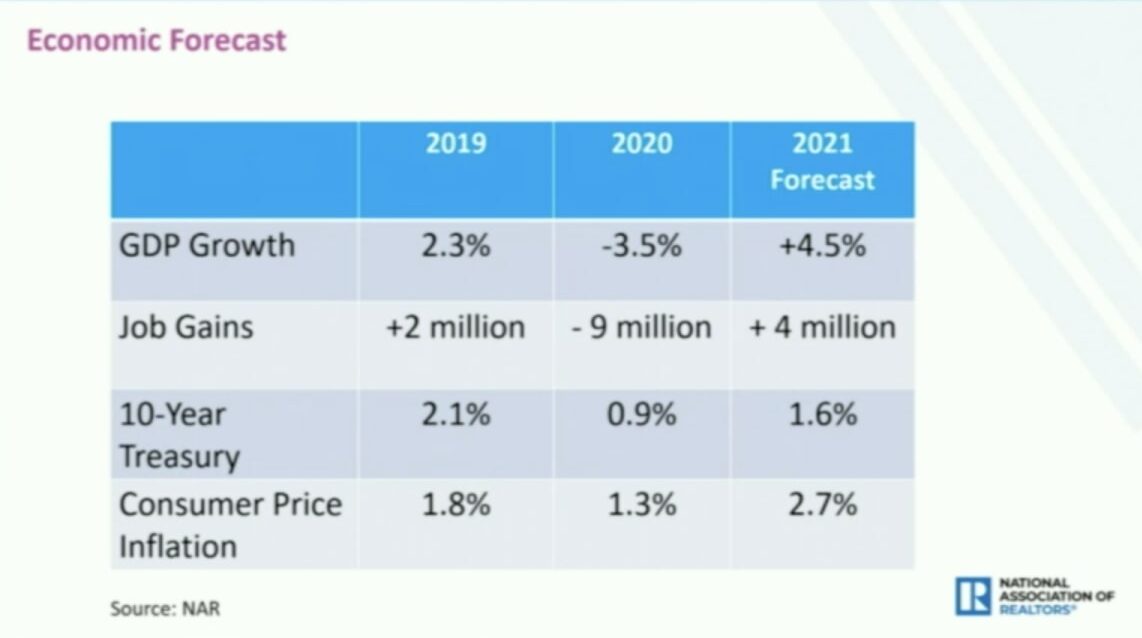 But while the economy is back, jobs are at 95 percent of their pre-pandemic peak and the country needs 8 million more jobs to catch up, according to Yun. He projects the U.S. will gain 4 million jobs this year after losing 9 million last year.

“It takes a little longer for the jobs recovery, but at least it is moving in the right direction,” he said. “The weekly wage earnings right now is growing strongly in manufacturing, construction, and logging. We need more lumber. They’re paying about 7 percent more than the year before, so hopefully the shortages that we are encountering in some of the construction can soon come back because companies in these industries are beginning to offer much higher wage growth compared to the rest of the other sectors.”

Yun also stressed that job openings are at a record high. The reasons why will likely be figured out by academics years from now, he said, but some possible reasons include lack of childcare due to continuing school closures, continued fear of coronavirus infection and enhanced unemployment benefits that discourage people from coming back to work.

Others have also noted that job openings are concentrated in the food service sector and many of those employees have moved on to other industries or have found higher paying, less risky jobs working for Amazon.

On Wednesday, the Bureau of Labor statistics announced that the Consumer Price Index, which measures the change in prices paid by consumers for goods and services, was up 4.2 percent from a year ago in April, the biggest uptick since September 2008.

That’s “concerning” because if inflation stays high, it may push mortgage rates up, according to Yun. He anticipates inflation will rise 2.7 percent this year and mortgage rates will average 3.2 percent, up from 3 percent last year, but down from 3.9 percent in 2019. 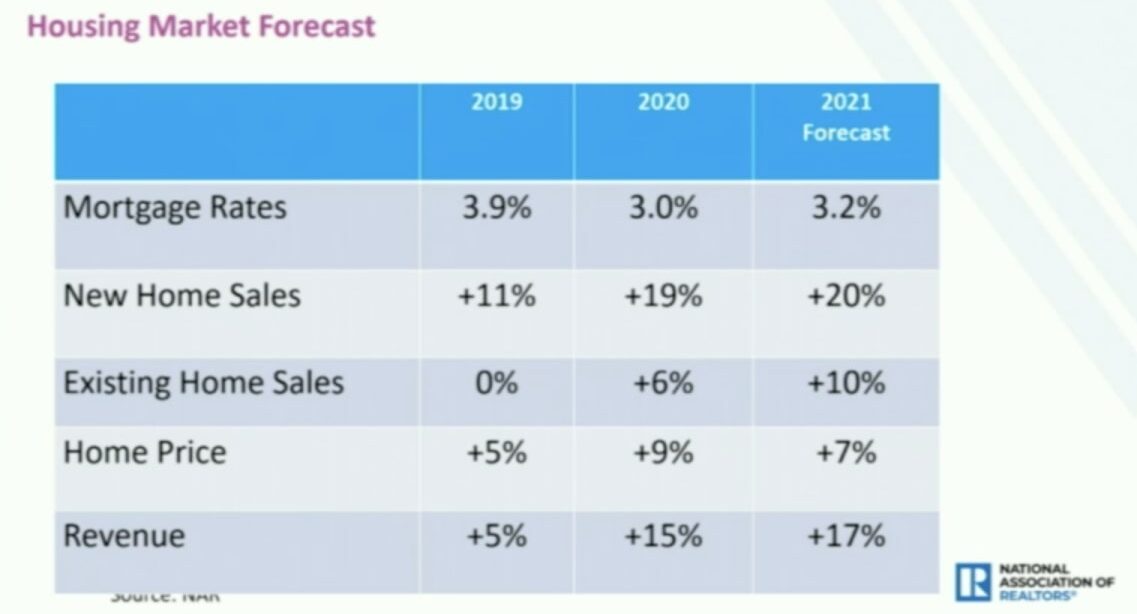 At the same time, he predicts existing-home sales will grow by 10 percent, even more than last year, when sales were fueled by those able to work from home during the pandemic. Still, there are signs that the housing market is “topping out,” which means that sales activity is still 5 or 10 percent above pre-pandemic levels, but no longer 20 or 25 percent above, Yun said. 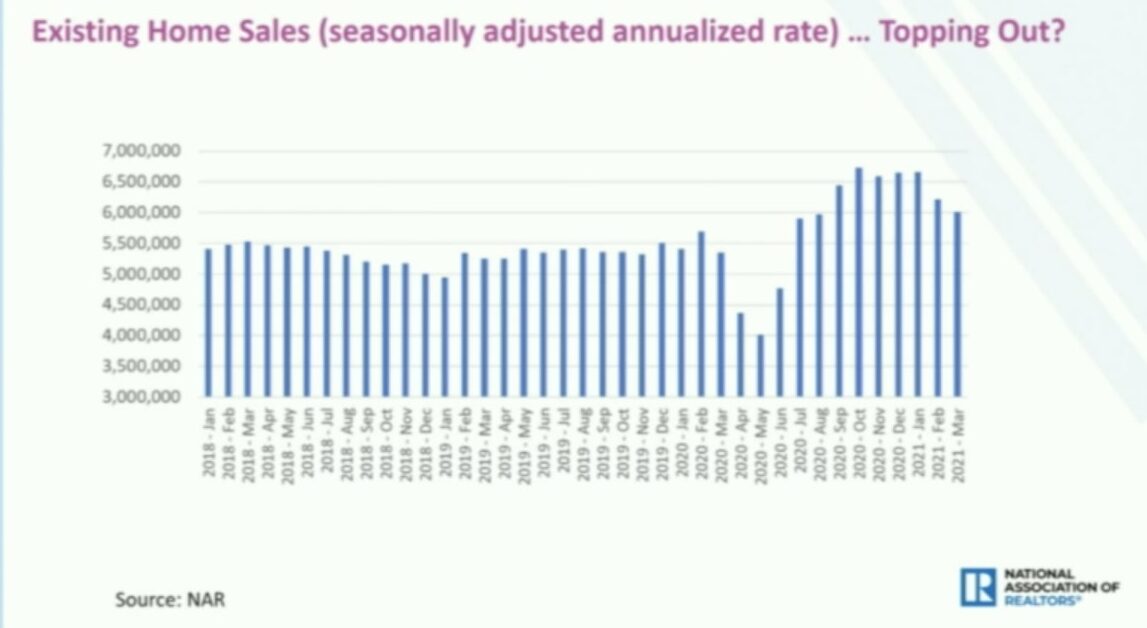 “If we look at the homebuilders, there is no loss of momentum,” Yun said. “Whatever they build, even putting in the price escalation clause to account for higher lumber prices, buyers still want to buy.”

Existing home sales are topping out not because buyers are stepping away, but due to record low inventory and multiple-offer situations, according to Yun.

Inventory is most lacking in the lowest, starter-home price brackets while there is a bit of an increase in the supply of homes over $1 million. 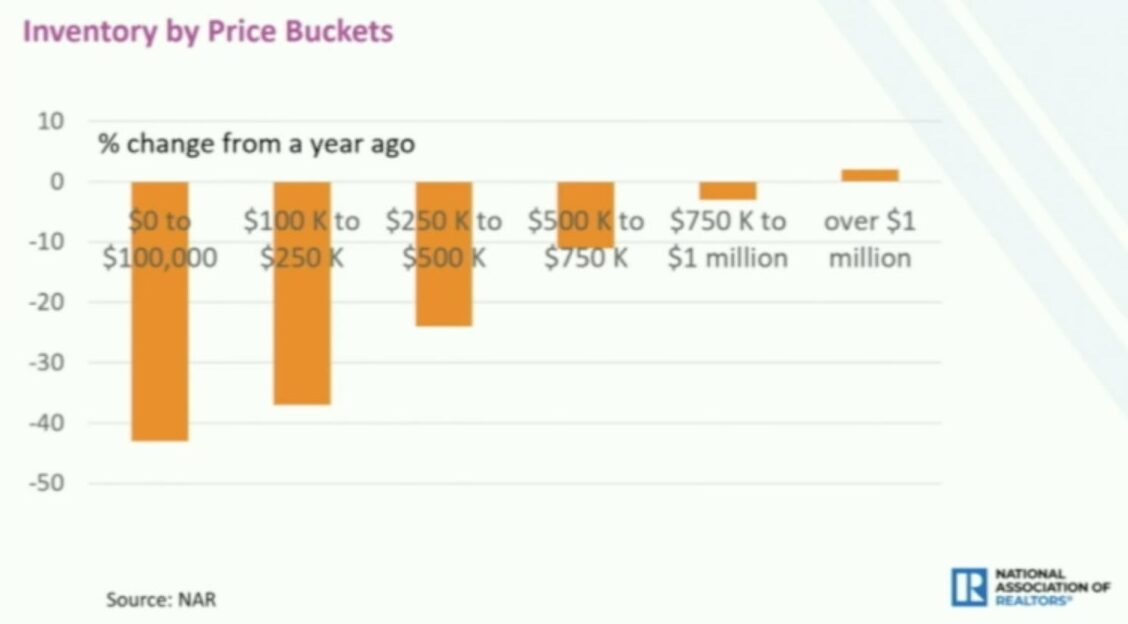 At the same time, there has been a sharp increase in the sales of million-dollar homes. 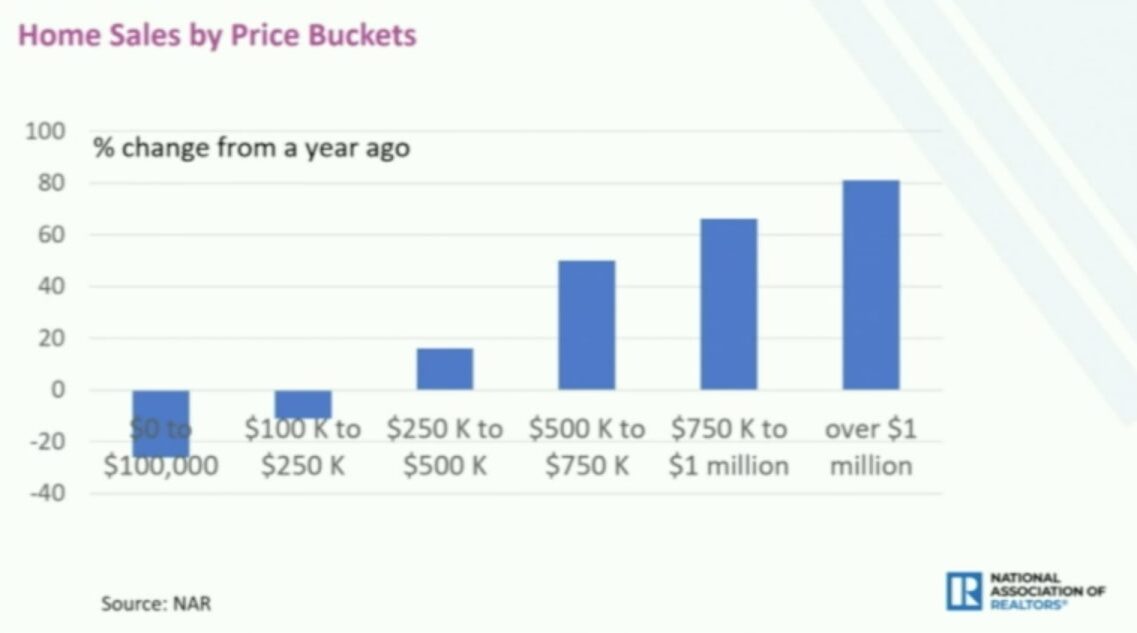 Homebuilders have been under-producing homes since the beginning of the Great Recession in 2007, but singe-family housing starts are beginning to ramp up, according to Yun. 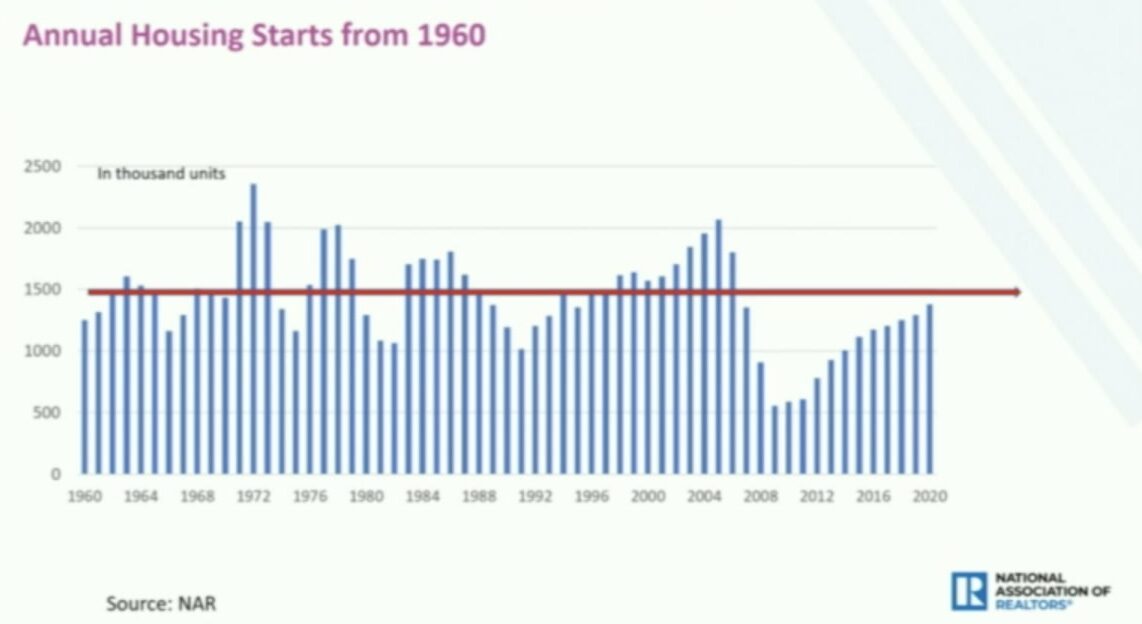 “The cumulative effect of 14 years of under-production is we simply don’t have enough homes for sale,” Yun said. “[The government should consider] opportunity zones, tax credits, infrastructure spending dedicated to housing, maybe consider tax relief for investor sales. Whatever it is, we need to bring more inventory because you can see that we will not fix this housing shortage in a simple one-year time frame.”

Why? First, the good news: more inventory. “Home construction is ramping up,” he said. “It’s gonna take several months to actually show up as inventory because you need time to complete the home.”

More people will also exit mortgage forbearance and decide to sell their home, which will boost inventory, he said. Vaccinations will also increase home sales by people who previously were afraid to allow strangers inside their home, he added.

Now the bad news: “Higher home prices, higher mortgage rates are simply squeezing away those homebuyers who are at the margin,” he said. “We don’t want this to occur but it is occurring.

“So a combination of more supply and less demand means less frenzied activity as we proceed with the year.” He predicted bidding wars would no longer be prevalent by 2022.

The Real Word: Why Are There Discrepancies In Real Estate Appraisals?

Escalation Clauses: What Agents And Their Buyers Need To Know

Houses that start off overpriced, just for a few days : RealEstate