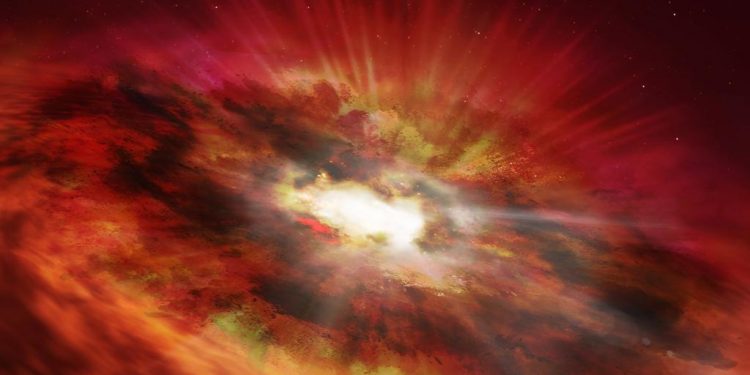 
Astronomers have found evidence of a “rapidly growing black hole” in the early universe, according to NASA.

This discovery has been labeled a “crucial missing link” as it could help us to understand the connection between the first supermassive black holes and young galaxies.

NASA explained: “Astronomers have identified a rapidly growing black hole in the early universe that is considered a crucial “missing link” between young star-forming galaxies and the first supermassive black holes, using data from the Hubble Space Telescope to make this discovery.”

The US space agency also released an artistic impression of a supermassive black hole as well as an image taken by the Hubble Space Telescope.

NASA continued: “This artist’s impression is of a supermassive black hole that is inside the dust-shrouded core of a vigorously star-forming “starburst” galaxy.

“It will eventually become an extremely bright quasar once the dust is gone.

“Discovered in a Hubble deep-sky survey, the dusty black hole dates back to only 750 million years after the Big Bang.”

Quasars are extremely bright objects in the universe that are said to be powered by black holes.

NASA has nicknamed the black hole GNz7q and said it’s been lurking like a “monster” in a well-studied area of the sky.

GNz7q has qualities of both and this is why it’s being labeled as a “missing link” that could help to prove the theory.

The black hole is said to date back to a time when the universe was only 750 million years old.

Experts think the universe is now about 14 billion years old.

Seiji Fujimoto, lead author of the Nature paper describing this discovery, said: “Our analysis suggests that GNz7q is the first example of a rapidly growing black hole in the dusty core of a starburst galaxy at an epoch close to the earliest supermassive black hole known in the universe.

“The object’s properties across the electromagnetic spectrum are in excellent agreement with predictions from theoretical simulations.”

Fujimoto said the black hole “provides a new avenue toward understanding the rapid growth of supermassive black holes in the early days of the universe”.

Adding: “Our discovery provides an example of precursors to the supermassive black holes we observe at later epochs.”

Britain can blame WFH for a rise in botched boob jobs