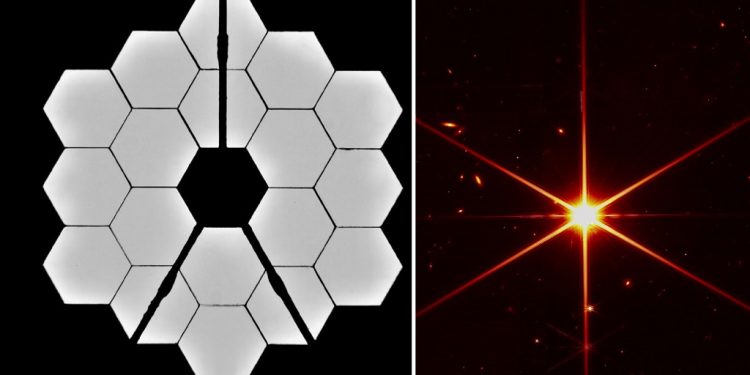 The telescope is out on a deep space mission and will be looking for signs of life in the universe.

What you’re seeing is a bright star with galaxies and other stars in the background.

The telescope’s view into deep space isn’t the only mind-blowing fact about the new photo.

When James Webb is looking at those stars and galaxies, it’s technically looking back in time.

The ‘time-traveling’ aspect of the James Webb telescope is all to do with how long it takes light to travel through the universe.

As it takes a really long time for light to travel we can essentially look way back in time from when stars and planets were formed after the Big Bang.

The light that reaches the James Webb space telescope may have traveled millions of miles from a star that no longer exists.

If we use the telescope to look far enough into the distance, light from close to the beginning of the universe will be visible.

Scientists think some parts of the universe will be impossible to see.

That’s because the universe is thought to be expanding so some light sources are constantly moving away from us.

That means that light may never be able to reach the James Webb Space Telescope.

However, it’s hoped that the telescope will teach us about how the universe is expanding.

NASA released a description of its new star image.

It said: “While the purpose of this image was to focus on the bright star at the center for alignment evaluation, Webb’s optics and NIRCam are so sensitive that the galaxies and stars seen in the background show up.

“At this stage of Webb’s mirror alignment, known as “fine phasing,” each of the primary mirror segments have been adjusted to produce one unified image of the same star using only the NIRCam instrument.

Regarding the new selfie, the US space agency explained: “This new “selfie” was created using a specialized pupil imaging lens inside of the NIRCam instrument that was designed to take images of the primary mirror segments instead of images of the sky.

“This configuration is not used during scientific operations and is used strictly for engineering and alignment purposes.

“In this image, all of Webb’s 18 primary mirror segments are shown collecting light from the same star in unison.”

If you were expecting better images from the $10 billion space telescope then you shouldn’t be disappointed for too long.

NASA has explained that the images will improve once all the tech on James Webb has been tested and positioned in the right places.

The telescope is now fully deployed, which means it’s finally unfurled its huge mirrors and the sun-shield that will help it look for signs of life in the universe.

The telescope is essentially a massive mirror that can use infrared to see way beyond what we’ve seen before.

James Webb has already come a long way from the first images it took back earlier this year.

Back in February, NASA released Webb’s image of multiple views of a star called HD 84406 and the telescope’s first selfie.