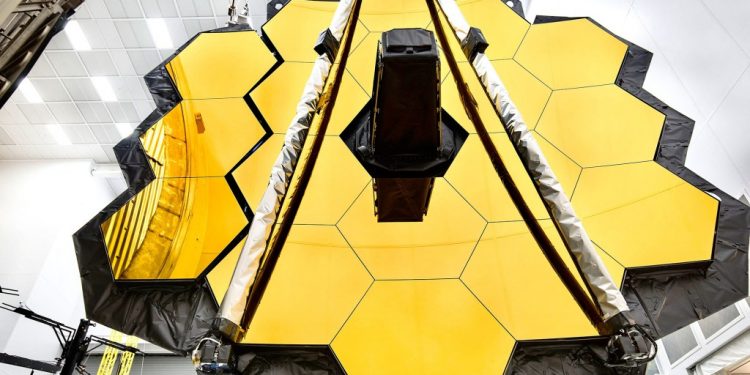 
Moving at a quarter of a mile per second in space, the James Webb Space Telescope got its golden wings Saturday in the final stage of its deployment since launch.

The most powerful telescope ever built launched from French Guiana on Christmas morning, but the massive observatory had to be folded to fit inside the Ariane 5 rocket.

Webb’s 21-foot-wide primary mirror was folded in two places like two ears on either side of a human head. One of those ears containing three hexagon mirrors opened on Friday, and the final step happened Saturday morning when teams deployed the last three mirrors on the starboard side. Now the telescope is in its final shape to look back into the cosmos.

It was a massive milestone for the mission and the international team responsible for the launch and each step in the deployment. Webb is a global effort between NASA, the Canadian Space Agency and the European Space Agency.

Since its launch, the telescope has been slowly unfolding itself in space piece by space. A huge step happened earlier this week when Webb’s five-layer sunshield opened. Each layer had to be tensioned before the next.

Then, the secondary mirror attached to three long arms was brought out in front of the spacecraft. Lee Feinberg, optical telescope element manager for Webb at NASA’s Goddard Spaceflight Center, called it the “world’s most sophisticated tripod.”

Saturday’s deployment of the primary mirror means the largest mirror ever in space has both wings open, and the telescope has completed each critical step to open from its launch cocoon. One hundred seventy-eight launch release mechanisms needed to unlatch for Webb to deploy fully. On Saturday, the final latches were released.

The deployment team at the control center Space Telescope Science Institute in Baltimore listened to some 1970s jams while checking off all the steps before the final mirrors could open. At one point, Anita Ward’s “Ring my Bell” could be heard through the NASA livestream.

Telemetry from the spacecraft was translated to an animation showing the wing coming into place as it happened in space.

Webb will continue traveling through space for the next two weeks to reach its final orbit 1 million miles from Earth, known as the second Lagrange point or L2. The spacecraft still has about 230,000 miles to go in its journey. It’s expected to arrive before the end of January.

The next five months will be spent cooling the telescope, aligning the 18 individual mirrors that make up the primary mirror and calibrating the science instruments.

By design, JWST has a “cool side” and a “hot side.” The hot side is the bottom of the spacecraft’s tennis-court-sized sunshield, facing the sun and protecting Webb’s instruments that need to operate at frigid temperatures.

The cool side includes Webb’s giant hexagonal-shaped mirror and will be negative 467 Fahrenheit at times. This presented an engineering challenge for teams building Webb because the telescope must operate in the sub-freezing temperatures of space, but it was built at room temperature on Earth. To ensure that everything would work in space, engineers put all the mirrors and instruments through cryo-vacuum testing at NASA’s Marshall Space Flight Center in Alabama.

The $10 billion JWST will build on the impressive legacy of the Hubble Space Telescope but is much more powerful. Webb will see in infrared light looking back to the first galaxies, discovering new worlds and helping solve unanswered questions about how we got here.

“Can you imagine, even in five years from now, how classes around the world will be impacted by the telescope being set up right now?” Zurbuchen said.

JWST could operate longer than its estimated 10-year lifespan and change what we know about the universe. Next-generation scientists will benefit from the mission.

What is the net worth of NFL legend Brett Favre, and what’s he up to these days?

What is the net worth of NFL legend Brett Favre, and what’s he up to these days?