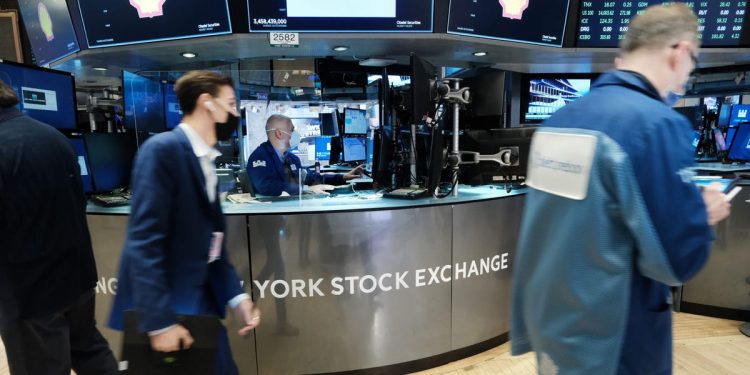 US stocks plunged after a big earnings miss for Facebook parent Meta Platforms sparked a wider technology rout led by the tech-heavy Nasdaq.

Shares of Meta sank 22% in premarket trading after it disappointed investors with weak fourth-quarter earnings that showed daily users falling for the first time ever. The social media giant also predicted current-quarter revenue below analyst expectations, as Apple’s privacy change to its iOS last year is expected to hurt sales sharply.

Ahead, investors are bracing themselves for earnings from Amazon, Ford, and Snap, as well as 110 other companies.

Here’s where US indexes stood shortly after the 9:30 a.m ET open Thursday:

Before Meta reported on Wednesday, equities were enjoying a rally driven by a streak of strong earnings that began with Apple and Microsoft. The benchmark S&P 500 had notched a four-day rally, its biggest gain since November 2020.

Worker productivity boomed through the last three months of 2021 as the economic rebound accelerated and the Omicron wave started to swell.

The productivity of nonfarm business employees rose at a 6.6% annualized rate in the fourth quarter, compared to the 3.2% gain expected by economists surveyed by Bloomberg. The increase follows a 5.2% contraction through the third quarter that marked the largest slump since 1981.

Later today, IHS Markit’s Flash Composite Purchasing Managers’ Index, widely viewed as gauge of overall economic health, will be released at 9:45 a.m. ET, while a survey by the Institute for Supply Management is expected at 10 a.m.

Oil retreated from a seven-year high as OPEC+ signaled another gradual output hike of 400,000 barrels a day for March.