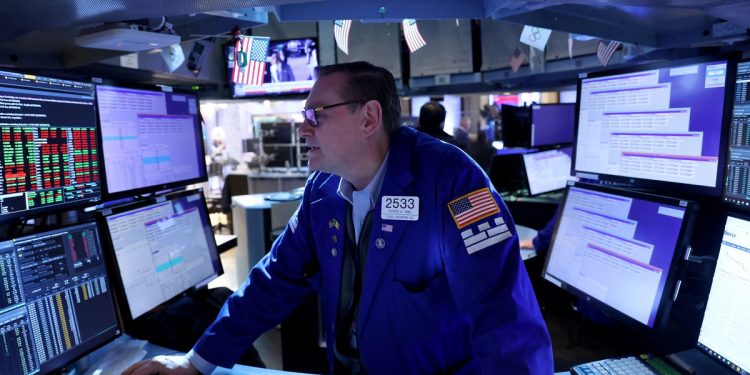 April 20 (Reuters) – The tech-heavy Nasdaq dropped on Wednesday as Netflix’s surprise decline in subscribers weighed on both the streaming giant and other high-growth companies, which investors feared may face similar post-pandemic performance issues.

By contrast, the blue-chip Dow was driven to a second-successive higher close by positive earnings from consumer giant Procter & Gamble (PG.N) and IT firm IBM Corp (IBM.N). The duo rose 2.7 and 7.1% respectively. read more

Netflix Inc (NFLX.O) plunged 35.1%, its largest one-day fall in over a decade, after it blamed inflation, the Ukraine war and fierce competition for the subscriber decline and predicted deeper losses ahead. read more

The ripple effects were felt both by financial technology names and companies whose fortunes were seen to have been boosted by pandemic trends such as lockdown measures.

“Once profits move so far, it becomes harder to get that next little bit of growth, and it’s harder to obtain it in the late cycle,” said Jason Pride, chief investment officer of private wealth at Glenmede.

Market-leading technology and growth stocks have struggled this year as investors worry that rising interest rates will dent their future earnings. The Nasdaq is down nearly 14% so far this year, while the benchmark S&P 500 is down 6.4%.

Overall, the earnings season has started on a strong note. Of the 60 companies in the S&P 500 index that have reported results so far, 80% exceeded profit expectations, as per Refinitiv data. Typically, 66% beat estimates.

The communication services sector (.SPLRCL) declined 4.1%, although eight of the 11 major S&P 500 sectors gained, led by the real estate index (.SPLRCR)which posted its best finish since Jan. 4. The consumer staples benchmark (.SPLRCS) was just behind it, climbing to a second-straight record close.

Meanwhile, the latest data points on the Federal Reserve’s monetary policy tightening plans were released in the afternoon.

Its “Beige Book” showed the U.S. economy expanded at a moderate pace from February through early April, while San Francisco Federal Reserve President Mary Daly said she believes the case for a half-percentage-point interest rate hike next month is “complete”. read more

The yield on 10-year Treasury note receded to 2.85% after a blistering rally that pushed it close to the key 3% level earlier in the session.

Tesla Inc (TSLA.O) fell 5%, but was trading higher after posting record deliveries and higher revenue in its first-quarter results after the close. read more

Investors had been concerned about the electric automaker’s ability to meet its ambitious 2022 delivery target after its biggest factory in Shanghai was shut as part of the city’s COVID-19 lockdown.

The volume on U.S. exchanges was 10.85 billion shares, compared with the 11.61 billion average for the full session over the last 20 trading days.