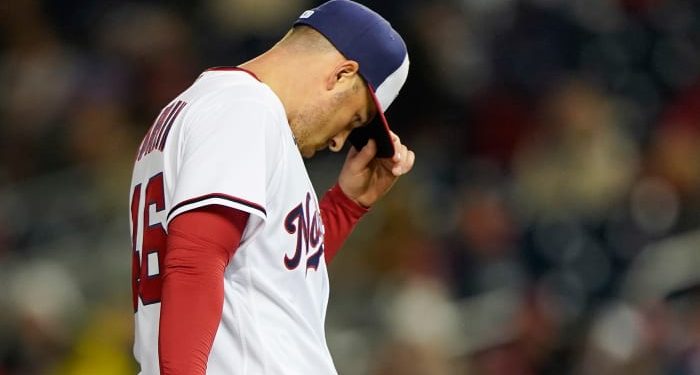 
WASHINGTON — The tarp on the mound read “2019 World Champions.” There was no arguing with the facts: The Washington Nationals did indeed win the 2019 World Series, and flags (or tarps) do fly (or sit) forever, as they say. Yet it was hard to imagine how all of that could have felt any less relevant to the team that would soon take the field.

This was the first “normal” Opening Day for the Nationals since they won the World Series. In 2020, there were no crowds due to the pandemic, and in 2021, the first home series was lost to an outbreak with the stadium capped at partial capacity when the season finally began. That means this is the closest the Nationals have been able to get to something like a celebratory springtime return to the field. Yet Thursday seemed quite distant from any such concept. For it was also the first Opening Day under what is definitively, undeniably a new era in D.C.: Welcome to a full season in a rebuild.

It is not that these Nationals look particularly different in April than they did when fans last saw them in September. Rather, they look almost just as they did after last year’s mid-season sell-off, when they scuffled through the first few months of play and proceeded to dismantle much of what was left from their championship team. Which makes this year the first one in some time that has been forced to begin without even an illusion of hope in Washington: If the last-place finishes of the last two seasons felt like unfortunate spots the team just stumbled into, this one feels like a foregone conclusion, a target it will be driving straight toward.

They couldn’t have done a much better job of capturing that sentiment on Opening Day. The Nationals lost to the Mets, 5–1, on a dreary night where Patrick Corbin faded out on the mound, the bullpen sputtered behind him, and the only run came from (who else?) Juan Soto, whose dazzling talent stands completely alone on this roster.

In other words: It was an evening that foretold a long season in D.C. And the few ways in which this team still resembles its old championship self only serve to underscore how different it actually is. To watch Corbin struggle through the last two seasons has been to feel vaguely haunted by the memory of how well he pitched in the years prior; Opening Day was no different. (Despite his fastball sitting a tick even lower than it did last season, the lefty was able to limit damage early on Thursday, only to crumble entirely in the fifth inning.) To look at Soto, whose abilities seemingly grow more transcendent with each passing year, can be to feel paralyzed with foolish hope that his talent not be wasted—a far cry from being able to have confidence that he will be the centerpiece of many great teams to come here. This sense of disconnect with the past rang through even in the pre-game introductions: Two of the largest ovations were reserved for players who returned to the Nationals this winter, Sean Doolittle and Aníbal Sánchez, pitchers who played big roles in the 2019 World Series and have now re-signed with the team after years elsewhere. The crowd greeted them like old friends. Which highlighted the point: The key players of that team are the last-minute veteran additions of this one.

And, of course, there was the tribute video. Before the game, the team played an homage to erstwhile ace Max Scherzer, now visiting with the Mets. The clip rolled through highlights of his time in D.C., punctuated with images of him signing autographs and talking to fans, and ended with the words “Thank you, Max,” splashed over a giant image of the World Series trophy. None of the footage was particularly old. (With Scherzer right there, prepared to pitch the next day, it couldn’t possibly be.) Looking at the current arrangement of this pitching staff, though, it felt like a relic of a bygone era.

That’s not to say there’s no direction here. If “rebuild” has garnered a reputation as something of a dirty word in recent years—a convenient label for any stretch of mediocrity, no matter how aimless, or how long—there is at least some feeling of purpose here for the Nationals. In their trades last year, they targeted players who were close to making an impact in the majors, and several have already secured spots on this roster. Like catcher Keibert Ruiz—who threw out a runner and had two base hits, a double and a single, on Thursday. But the fact remains that Washington is projected to be in last place, with 90 losses or more expected from both FanGraphs and Baseball Prospectus, and that frankly seems a tad generous.

Perhaps the future will be bright. But Opening Day was a reminder that the present looks rather dull—and very, very, very untethered from the recent past.