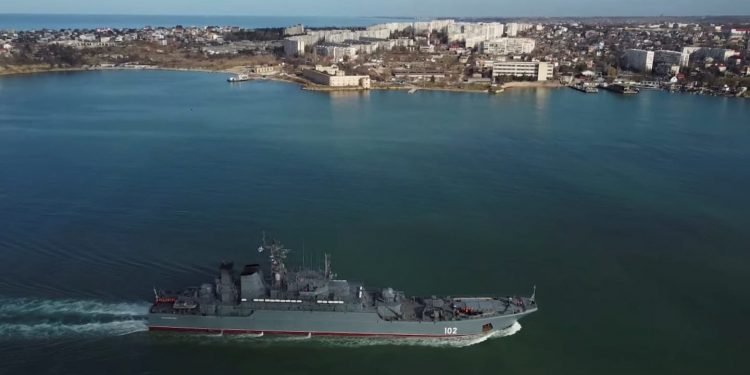 U.S. Secretary of State Antony Blinken said Friday during a visit to Melbourne that the West continues to see “troubling signs of Russian escalation, including new forces arriving at the Ukrainian border.”

“As we’ve said before, we’re in a window when an invasion could begin at any time, and to be clear, that includes during the Olympics,” Blinken said, referring to speculation among some officials that Russian President Vladimir Putin may wait for the conclusion of the Olympic Games in Beijing to avoid angering China, its key ally. The exercises are scheduled to end on Feb. 20, the same day as the games conclude.

Biden’s remarks were aired after a tense encounter Thursday between British Foreign Secretary Liz Truss and her Russian counterpart, Sergei Lavrov, in Moscow. She warned that a renewed Russian invasion of Ukraine would lead to “severe consequences,” while Lavrov characterized their meeting as a conversation between the “deaf and the dumb.”

In Berlin, negotiators representing Russia, Ukraine, France and Germany failed to come to an agreement after nine hours of discussions seeking a resolution to a long-running conflict between Kyiv and Moscow-backed separatists in Ukraine’s contested east. There were no immediate plans for another round of the “Normandy format” talks, though Ukraine’s envoy said he hoped negotiations would continue.

Russia, which denies having plans to attack Ukraine, has assembled some 130,000 heavily armed troops around its smaller neighbor, from which it annexed Crimea in 2014. It is participating in the largest Belarus-based training exercise it has ever held, within striking distance of Ukrainian territory. The operations involve tens of thousands of troops and sophisticated weapons systems such as S-400 surface-to-air missiles, Pantsir air defense systems and Su-35 fighter jets.

The Kremlin is also conducting military maneuvers in the Black Sea, near the southern coastline of Ukraine’s mainland. This week, a detachment of six Russian landing ships arrived at the Sevastopol port in Crimea. The ships typically are used for unloading troops, vehicles and equipment. Some were used in Russia’s invasion of Georgia in 2008.

The Russian deployment and Moscow’s refusal to back down means Europe should brace “for the worst,” NATO Secretary General Jens Stoltenberg told reporters Thursday, adding that the “warning time for a possible attack is going down.”

Putin has demanded that NATO permanently bar Ukraine, which he sees as part of his country’s sphere of influence, from joining the military alliance. He has also demanded that the bloc pull back its forces from Eastern Europe. The U.S.-led alliance has rejected the ultimatum, citing an open-door policy that allows any nation to seek entry, even as Washington signals its willingness to negotiate on issues Moscow considers of “secondary” importance.

“NATO will not compromise on core principles,” Stoltenberg said at a news conference in Brussels with British Prime Minister Boris Johnson. “Renewed Russian aggression will lead to more NATO presence, not less.”

Defense ministers of NATO member states will meet next week and consider shifting additional troops to bolster the bloc’s southeastern flank. Members have already committed to deploying military assets to Bulgaria, and the United States is also moving troops into Romania.

“We have repeatedly stated at various levels that we have no plans to ‘invade’ or ‘attack’ Ukraine,” Russian Deputy Foreign Minister Andrey Rudenko told the Tass news agency. “Clearly, establishing peace in Ukraine is not part of NATO’s plans.”

Stoltenberg urged for diplomacy to continue, while British Defense Secretary Ben Wallace will meet his Russian counterpart in Moscow on Friday for talks. The visit comes after Wallace announced that 350 British Royal Marines will soon be deployed to Poland in a gesture of solidarity.

Scholz has been criticized at home and abroad for his hands-off approach to the Ukraine situation. Germany is a NATO member but has close economic ties with Moscow, on which it depends for energy imports.

Kyiv is hosting a military exercise of its own this week, and officials there condemned the Russian operations as a threat to Ukrainian sovereignty. Ukraine also accused Russia of violating international law by restricting wide swaths of the Black Sea to conduct missile and artillery fire training, a claim that Kremlin spokesman Dmitry Peskov denied Thursday.

Peskov said that all Russian naval conduct in the Black Sea is in compliance with international maritime law and that the Kremlin’s ships are not blocking any trade routes, according to Tass.

Cheng reported from Seoul. Robyn Dixon in Moscow contributed to this report.