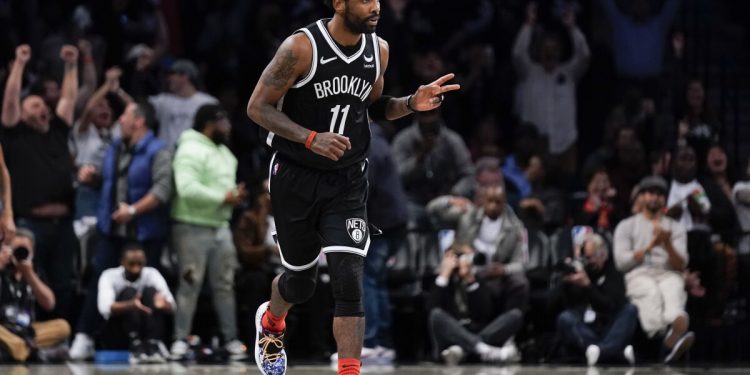 Kyrie Irving had 34 points and 12 assists, Kevin Durant added 25 points and 11 assists, and the Brooklyn Nets took the No. 7 seed in the Eastern Conference by beating the Cleveland Cavaliers 115-108 on Tuesday night in the play-in opener.

The Nets raced to a 20-point lead after one quarter and turned the Cavaliers away time and time again to earn a matchup with No. 2 seed Boston in a series that begins Sunday.

Irving made his first 12 shots before a 3-pointer rimmed out in the fourth quarter. He finished 12 for 15.

A preseason NBA Finals favorite who sputtered through a turbulent season and were in 10th place entering the last week of the regular season, the Nets have run off five straight wins. With Durant and Irving, they are far more dangerous than the usual No. 7 seed.

And both are willing to give the ball to teammates who are capitalizing when they get it. Bruce Brown had 18 points, nine rebounds and eight assists, while Andre Drummond scored 16 points.

Darius Garland scored 34 points for the Cavaliers, who have another chance to earn the No. 8 seed. They will host the winner of the Atlanta-Charlotte game on Friday, with the winner moving on to face No. 1 seed Miami.

Brooklyn and Cleveland both went 44-38 but the Nets clinched the tiebreaker by beating the Cavs at Barclays Center last Friday to finish 3-1 against them. Cleveland was confident it could come back to Brooklyn and win, though it was clear quickly just how difficult that would be.

The Nets made nearly 71% of their shots in the first quarter — Irving and Durant combined to make all eight of theirs — and closed the period with a 15-3 spurt that made it 40-20. It was a bigger lead than Brooklyn had in any first quarter during the regular season.

The offense sputtered, as it usually does, when Durant went to the bench to start the second and Cleveland went on a 9-2 run to cut it to 13. The margin stayed right around there the remainder of the half, with the Cavs missing a number of open looks before Irving’s jumper at the buzzer made it 57-43. That made him 9 for 9 at the break.

The Cavaliers, trying to extend a surprising season that saw them double their win total from a season ago, kept chipping away in the second half. But they would too often miss an open 3-pointer or give up an extra possession on an offensive rebound that the Nets would take advantage of.

Nic Claxton had 13 points and nine rebounds for Brooklyn.