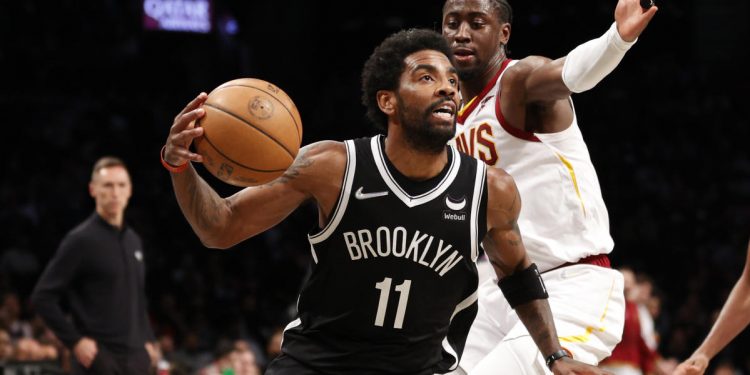 This is the Brooklyn Nets team nobody wanted to see in the first round of the playoffs.

Now the Boston Celtics have them.

The Nets opened a big early lead on Tuesday then held off a late Cleveland Cavaliers rally to ride into the postseason with a 115-108 victory. They’ll do so as a No. 7 seed in what counts as an uncommonly difficult first-round matchup for the second-seeded Celtics.

The Cavaliers, meanwhile remain alive for the East’s final playoff spot. They’ll face the winner of Wednesday’s game between the Charlotte Hornets and Atlanta Hawks in an elimination game for the No. 8 seed.

Kyrie Irving put on a show, making very much good on his new-found green light to play home games in Brooklyn despite his vaccination status. He hit his first 12 field goals before a fadeaway 3-pointer rattled out early in the fourth quarter for his first miss en route to 34 points and 12 assists. He finished shooting 12 of 15 from the field while connecting on 3 of 6 3-point attempts.

Most of his shots weren’t easy. Far from it. Take, for instance, this contested jumper to beat the first-half buzzer and enter halftime with a 57-43 Nets lead.

Irving scored 11 of his 30 points as the Nets raced out to a 40-20 first-quarter lead, threatening to run away with the game. But the Cavs kept within striking distance before cutting their deficit to 97-91 midway through the fourth quarter.

They generally made their moves when either Irving or Durant left the floor. A 7-2 run late in the third quarter when Irving took a breather helped spark the late rally. But Cleveland wouldn’t get closer than five points in the fourth quarter as Brooklyn’s pair of superstars proved too much to overcome.

“We’re gonna speak positivity into this whole entire journey thus far,” Irving told TNT after sharing a moment with emerging Cavs star Darius Garland following the final buzzer. “It’s been ups and it’s been downs. But we’ve stayed together. We’ve remained resilient. We’ve been through a lot of changes. And we’ve evolved since we came out of All-Star break.”

Irving also discussed his experience playing while he’s fasting from sunup to sundown during Ramadan.

“It’s a journey with God,” Irving said. “I’m not alone in this. I have brothers and sisters all around the world that are fasting with me. We hold our prayers and our meditation very sacred. When you come out here, God’s inside me. God’s inside you, God’s inside all of us. I’m walking with faith, and that’s all that matters.”

While Irving carried the load, Durant added 25 points, 11 assists and three blocks. Bruce Brown added 18 points and nine rebounds while Andre Drummond tallied 16 points and eight rebounds. Brooklyn’s biggest concern from Tuesday’s game is depth that could come into play in a best-of-seven series. If Irving or Durant get into foul or injury trouble, the Nets are a different team. Ben Simmons‘ status, meanwhile, remains a mystery. He watched Tuesday’s game from the bench in street clothes.

Garland led the Cavs with 34 points and five assists while shooting 13 of 24 from the field. Cleveland played without All-Star center Jarrett Allen, who’s been sidelined since March 6 with a finger injury. He hasn’t been ruled out for Friday’s elimination game at home.

Grab These 5 Large-Cap Stocks Before They Jump 40%, According to Wall Street