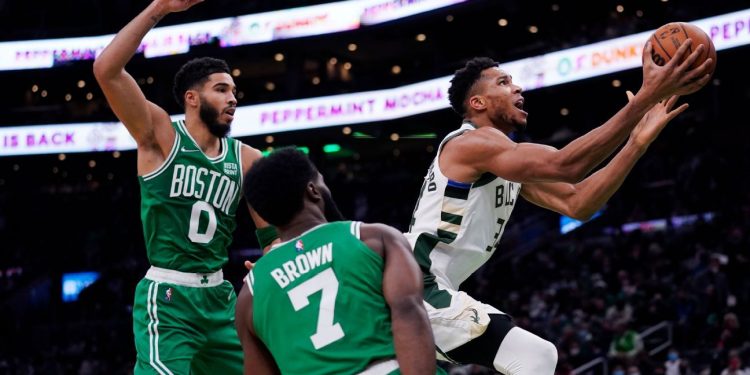 Which NBA contenders will join the Miami Heat and Golden State Warriors in the conference finals?

Sunday’s Game 7s feature two series that could not be more different.

The Milwaukee Bucks and Boston Celtics (3:30 p.m. ET, ABC) have each bruised their way into their finale, each winning classics on the opponent’s floor behind superstar performances from Jayson Tatum and Giannis Antetokounmpo.

Meanwhile, the Dallas Mavericks and Phoenix Suns (8 p.m. ET, TNT) are tied heading into Game 7, but only two matchups have been decided by single digits with three others decided by at least 20 points.

Regardless of how each team got here, these Game 7s will help shape the legacies of players such as Tatum, Antetokounmpo, Chris Paul, Devin Booker and Luka Doncic. Which superstars will rise to the occasion and propel their teams one step closer to the NBA Finals?

Here’s what to watch ahead of each showdown.

Legacies are on the line in Celtics-Bucks

On the final day of the regular season, the Milwaukee Bucks had a chance to secure the No. 2 seed in the Eastern Conference with a victory. Instead, the Bucks decided to rest their starters and lost the game, paving the way for the Boston Celtics, who played their regular rotation, to move ahead of them in the standings.

That decision is why the deciding Game 7 will be played in Boston on Sunday afternoon.

“Good old Game 7. Beautiful,” Bucks star Giannis Antetokounmpo said after Game 6. “You don’t know if you’re ever going to be a part of a Game 7… so never take it for granted.”

Each team has had no issues winning in each other’s buildings during this back-and-forth series. The road team has won four of the six games so far, including three straight. Milwaukee has experience winning a Game 7 on the road during the second round, beating the Nets in Brooklyn last year to advance in a similar series to this one.

But the Bucks are facing an even tougher challenge this year, trying to advance without forward Khris Middleton, whose absence is becoming more evident each game.

The Bucks have posted the lowest offensive rating of any team in the second round. Antetokounmpo scored 44 points in Game 6. The rest of the Bucks combined for 51 points. Milwaukee was minus-29 in 22 minutes with Grayson Allen on the floor and minus-22 in 19 minutes of Brook Lopez. George Hill has not scored a basket in three of the four games he’s played during this series.

Jayson Tatum and Giannis Antetokounmpo combine for 90 points in an incredible Game 6 that sees the Celtics come out on top.

Antetokounmpo has remained dominant and found a way to make his mark against the Celtics’ stifling defense. He’s averaging 35.3 points, 13.8 rebounds and 6.8 assists during this series, including three straight games with 40 points and 10 rebounds, making him one of four players in NBA history to do so, and the only player to do it twice (last year’s Finals).

However, his brilliance has been matched recently by Celtics star Jayson Tatum, who has responded well following a clunker in Game 3, where he finished with 10 points on 4-of-19 shooting. Since then, Tatum is averaging 36.7 points, 9.3 rebounds and 4.3 assists and his 46-point performance in Game 6 will find its way into Celtics’ lore if Boston wins the series. For Milwaukee to win this series, it’s going to need better performances from its role players to complement Antetokounmpo.

For Boston to advance, it will continue to lean on a smothering defense and Tatum’s elite shot-making to bail it out of offensive ruts. Tatum and Antetokounmpo have been engaged in a duel for the history books already in this series. Game 7 could be a chance for one of them to cement a legendary performance.

All the pressure is on one side in Mavs-Suns

The Mavericks earned “a little bit more recess time” with their Game 6 rout of the Suns, as Jason Kidd put it during his postgame talk in the locker room.

It’s an intentionally playful way to frame a Game 7. It’s the highest-stakes situation in the NBA. But Kidd and the Mavs’ bunch of loose underdogs seem to believe there will only be pressure on one team Sunday afternoon in the Footprint Center in Phoenix.

*If necessary | All times Eastern

That of course would be a Phoenix squad that is coming off an NBA Finals appearance, had the best record in the league this season and is led by a legend in Chris Paul, 37, who is on a quest for his first championship ring.

“We’re young,” Kidd said. Never mind that six of the Mavs’ top-eight minutes leaders in the playoffs are at least 29 years old. That fact doesn’t fit his narrative. “We have a 23-year-old star playing at a high level every night, fun to watch, people love to play with him. This is a great learning experience for us. We will be better, but this is just the beginning of the journey. Again, no one had us here but ourselves, and we believe that we can do something special.”

Before Game 6, Kidd pretended to be confused by the term “elimination game,” as the coach in his first season on the job in Dallas insisted, “We’re just starting, and it’s fun.”

It’s been a strangely simple series so far, one that will be decided in Game 7 despite none of the previous six contests being close. Both teams have protected their home court with relative ease, a trend the Suns certainly hope continues in the series finale.

“I think we worked all season to have home-court advantage and get the last game in our house, and that’s exciting,” Suns star Devin Booker said. “It’s Game 7, man. I ain’t never been in a Game 7.”

Booker, however, did prove himself as a closer during his first taste of the playoffs last season. Kidd has often referenced the 47-point performance from Booker that he witnessed as an assistant on the Lakers’ bench when the Suns slammed the door on them last season. The Suns’ starting lineup from that Finals run remains intact, led by Paul and his 141 games of playoff experience.

But the Mavs’ young stars — and yes, Brunson has elevated himself to that status — are no strangers to performing under pressure. Brunson won a pair of NCAA titles at Villanova. Doncic has accumulated a collection of championships with Real Madrid and the Slovenian national team.

How’s this for an example of coming up big in a hostile environment with the stakes high? Doncic had a 31-point triple-double when Slovenia clinched its first men’s basketball Olympics bid by beating Lithuania on Lithuanian soil. He craves these kind of opportunities.

“Before the game, you have that feeling — like butterflies in your stomach, like they say,” Doncic said. “I like that feeling. It’s a basketball feeling, a great feeling for me.”