NBA playoffs: Heat take Game 1 from Hawks in a rout 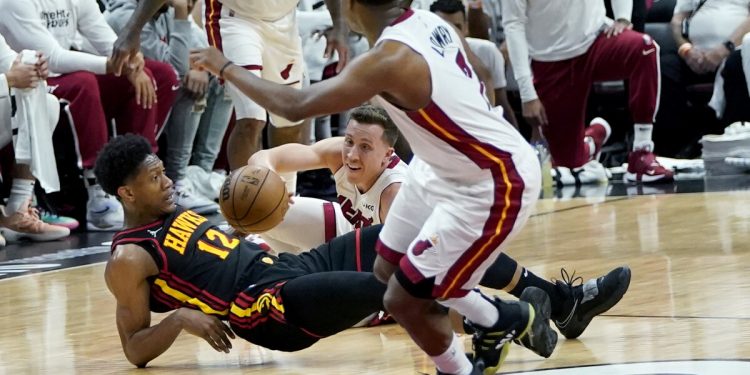 
Duncan Robinson set a franchise playoff record with eight three-pointers, and the Miami Heat forced Trae Young into matching the worst-shooting game of his career on the way to a 115-91 win over the Atlanta Hawks in Game 1 of an Eastern Conference first-round playoff series Sunday in Miami.

Robinson scored 27 points on nine-of-10 shooting from the field for the Heat, eight of nine from three-point range. Jimmy Butler scored 21, P.J. Tucker added 16 and Kyle Lowry had 10.

Game 2 is Tuesday in Miami.

Robinson broke the record of seven three-pointers that he previously shared with Damon Jones and Mike Miller.

Young missed all seven shots from three-point range and finished with a season-low eight points. Bogdan Bogdanovic missed all eight of his shots, and the Hawks never led outside of the opening minutes.

Butler revealed the Heat game plan when it comes to defending Young: “Just make it physical on him, challenge every shot, keep him off the free-throw line and make him pass,“ he said.

NMIH And DHI: A Dive Into The Housing Market – Part 1

NMIH And DHI: A Dive Into The Housing Market - Part 1