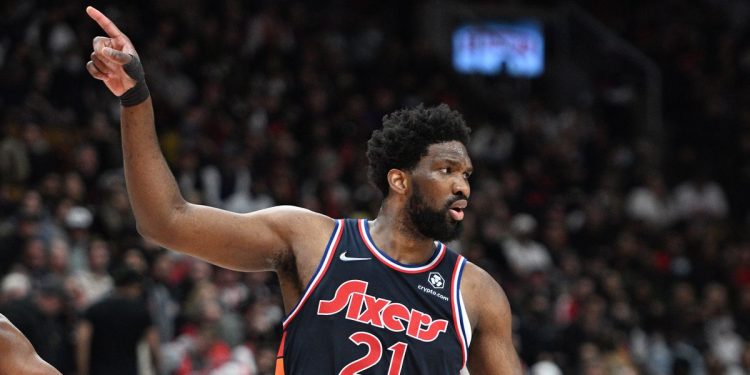 On Friday evening, Shams Charania of The Athletic reported that superstar Joel Embiid suffered an orbital fracture and mild concussion during the Philadelphia 76ers’ Game 6 win over the Toronto Raptors on Thursday.

“He will be listed as out and there is no timetable for his return,” Charania tweeted.

Sources: 76ers All-NBA star Joel Embiid suffered a right orbital fracture and mild concussion in series-clinching Game 6 win last night in Toronto. He will be listed as out and there is no timetable for his return.

The Sixers issued a statement as well, confirming the MVP candidate’s injury.

“Joel Embiid suffered a right orbital fracture and mild concussion in last night’s game vs. Toronto,” read the Sixers’ statement. “Embiid is out and further updates will be provided as appropriate.”

Late in the fourth quarter, Embiid took an offensive foul on a drive from Pascal Siakam, where Siakam’s elbow/arm collided with Embiid’s face. Initially, the play was ruled an and-one for Siakam, but was overturned and deemed an offensive foul after review.

With Philadelphia ahead by 29 and fewer than four minutes remaining, Embiid subbed out after that play. The Sixers and Miami Heat kick off their second-round series on Monday.

Back in March 2018, Embiid suffered an orbital fracture and concussion when he collided with Markelle Fultz. He underwent surgery and missed three weeks before returning with a protective mask.

Kyle Neubeck of PhillyVoice reports that “early indication” is that Embiid will not require surgery, but “whether that means he can make it back/get cleared anytime soon is another story.”

Embiid will be evaluated again next week, but at a minimum he must be out 5 days with the concussion, sources said.

There is no timetable for this injury yet but sources said “the door isn’t closed.”

I joined Jas Kang on the latest episode of Sixers Daily to discuss the devastating news regarding Embiid’s injury. You can listen to it below:

Apple to developers: if we deleted your old app, it deserved it – The Verge

Apple to developers: if we deleted your old app, it deserved it - The Verge