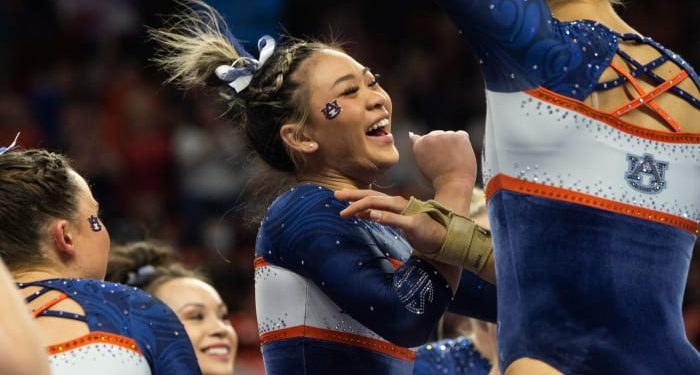 
This season of NCAA gymnastics has featured major stars competing some of the most difficult skills ever performed at the collegiate level. Now the best of the best will go head to head at the national championships in Fort Worth, slated for April 14 to 16. Here are 10 routines you don’t want to miss:

On vault, a Yurchenko, which requires a roundoff onto the springboard and a backward entry onto the table, is the most popular choice among collegiate gymnasts. But only a handful of competitors do the double-twisting variation of the skill, and Johnson’s is one of the best. She flies high and twists with ease, but sticking any vault is a challenge. If she nails the double at nationals, she has a solid shot at taking home an individual event title.

Wong is an incredibly graceful gymnast known for her poise and elegant lines, but don’t underestimate her vaulting abilities, especially because she brings a unique skill to the Gators’ lineup. Her vault entry begins with a roundoff, similar to a Yurchenko, but then includes a half twist onto the vault table, a front flip in a pike position and a half twist out. She earned a 10.0 at regionals and could easily achieve perfection again in Fort Worth.

Have you been living under a rock? Of course you should watch Lee on bars! The reigning Olympic all-around champion is world class on every event, but her bar routine is particularly dazzling. It isn’t as intricate as the set that she competed in Tokyo (which earned her an individual bronze medal on the event), but there is a possibility that she’ll pull out a Nabieva, a release move that no other gymnast has performed in NCAA competition before. The Nabieva, which she does around the seven-second mark in the video above, is extremely difficult because it’s performed in a laid-out position, meaning Lee’s entire body has to clear the high bar before she recatches it. Even if she opts to leave it out of her routine, her transitions between the bars and her full-twisting double back tuck dismount set her apart from competitors.

Davis’s bar routine is a pleasure to watch because it combines a sky-high release, exquisite form (look at that toe point!) and a double front tuck dismount complete with a half twist. The sophomore typically anchors the Sooners’ bar lineup which is absolutely stacked. The five gymnasts who compete before her are worth watching as well because this is an event where Oklahoma really shines.

If you look up “clutch” in the dictionary you should find a video of O’Keefe tumbling and leaping through her beam routine with ease. She exudes confidence when competing on the four-inch apparatus, and it’s rare to see her have even the slightest bobble. O’Keefe is a model of consistent excellence, and she knows how to punctuate a performance with an authoritative stick. If things go awry during Utah’s beam rotation, look to this beam queen to right the ship.

After an ACL tear sidelined her for all of last season, Hu made her triumphant return this year with a routine that shows off her incredible flexibility and features a unique mount. Her choreography is creative, and her acro skills look effortless. It’s as if she’s floating from one end of the beam to the other before capping off her routine with a back handspring into a gainer full-twisting layout. Missouri’s journey to nationals was a bit surprising because the Tigers had to knock off LSU and UCLA to advance beyond regionals, but routines like Hu’s prove why this team is in the running for a title.

Wojcik made history last season when she became just the third Michigan gymnast ever to score a 10.0 on beam, and she was the first to do so since 1997. Her routine features a triple flight series—two back handsprings into a layout step-out down the length of the beam—and it’s rare that she is anything less than solid on the landing. Her 1.5 twisting dismount off the end of the beam requires a blind landing, but Wojcik is more than capable of sticking consistently. The Wolverines will need a big score from her if they want to repeat as national champions, and she’s proved she can handle the pressure.

It didn’t take long for Chiles to earn her first 10.0 on floor. The freshman, who helped Team USA to a silver in Tokyo, achieved perfection with just her second collegiate floor routine. Her performance is equal parts fun, entertaining and gasp-inducing, as she opens with a double back layout and somehow continues to raise her energy with each sassy dance move. She mimes playing the piano along with a snippet of Lizzo’s “Truth Hurts,” leaps to Normani’s “Motivation” and caps her routine with a double back pike set to “Rumors” by Lizzo and Cardi B. Though UCLA didn’t qualify into the team portion of the championships, Chiles is carrying on the Bruins’ legacy of electric floor routines and is a serious contender for an individual title on the event.

Gobourne is fierce all the way from her pointed toes up to her flared fingers, which she uses to form a crown that she places atop her head at the beginning of her Missy Elliott–inspired routine. Her performance quality is so high due to her captivating facial expressions and precise dance moves that you feel like you’re at a concert that also features amazing tumbling passes. This Auburn team doesn’t have a ton of postseason experience, but as a senior Gobourne could lead the Tigers to something special while also picking up an individual title in the process.

Since winning a gold on floor at the 2020 Olympics, Carey has absolutely dominated collegiate gymnastics. She’s proved week after week that she’s a force to be reckoned with on all four events, but she’s especially stellar on floor. She opens with a double-twisting double-back tuck, and each time she lands it it looks like she simply dropped out of the sky into a perfectly controlled lunge. The skill, she says, is easy for her because it’s a simpler version of the first tumbling pass of her gold medal-winning routine. (Don’t be fooled. Twisting twice while simultaneously flipping twice is anything but easy.) Oregon State just missed qualifying to nationals as a team, but Carey has what it takes to bring a few trophies back to Corvallis if she hits the polished routines she’s shown all season.

If after 10 routines you’re still hunting for more, check out Norah Flatley’s floor routine (which opens with a beautiful triple twist), Lexy Ramler’s beam set and all of Trinity Thomas’s gymnastics (she has the potential to score a 10.0 every day on every event).

Why password sharing is a big problem for streamers

PSVR 2 Sense Controllers Have ‘Potential To Be The Best In This Current Gen,’ Says Polyarc Engineer

PSVR 2 Sense Controllers Have 'Potential To Be The Best In This Current Gen,' Says Polyarc Engineer