Modern life getting too much for you? You could always try escaping to a cabin somewhere idyllic for a reset.

Not sure how or where? Pick up a copy of Modern Cabins: Return to the Wild for inspiration. The spellbinding tome ‘illustrates the infinite possibilities in beautiful, creative cabin designs set in idyllic natural locations for a great local vacation’, says the publisher, Images Publishing.

It adds: ‘Each page is an endless source of inspiration for armchair architects and those seeking to create a peaceful sanctuary that fuses distilled ingenuity with eco-friendly style. Each cabin will have you dreaming of escaping the traffic and bustle of the city for a refreshing restart.’

Dev Desai (Dev Desai Architects and Associates), writing in the introduction, says: ‘This book showcases a spectacular compilation of contemporary cabins situated in a variety of natural settings that are categorised according to environmental contexts, such as forests and mountains, and waterside and rural locations.

‘Against these inspiring and stunning backdrops, it features projects that extend from luxurious accommodations to the increasingly popular modular and prefabricated cabin models designed for fuss-free off-grid living – each cabin different, but all cued to only one purpose: escape.’

Scroll down for a sneak peek at the cabins featured, from New York to Norway… 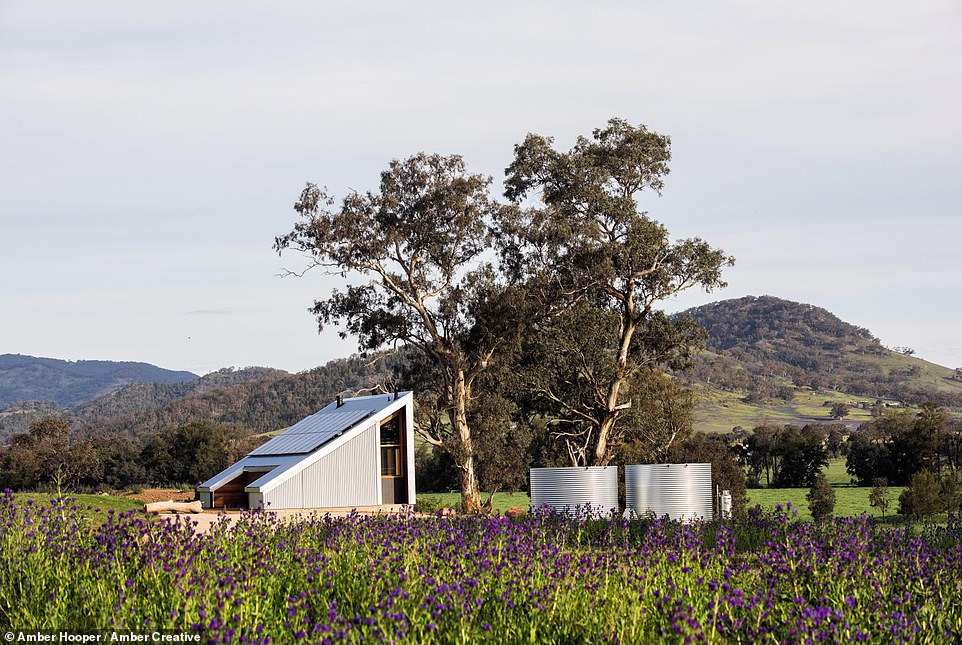 This image shows a striking hut in Mudgee, New South Wales, Australia. The book explains that it has an ‘angled galvanised shell and rich timber interior’ that ‘reference the predominant rural vernacular of hay sheds and outbuildings, in particular an existing hay shed that was destroyed by a storm in 2017’. The tome adds that the angled roof isn’t just a reference to the remnants of the shed, but also houses the solar array on the building. The design is by Cameron Anderson Architects 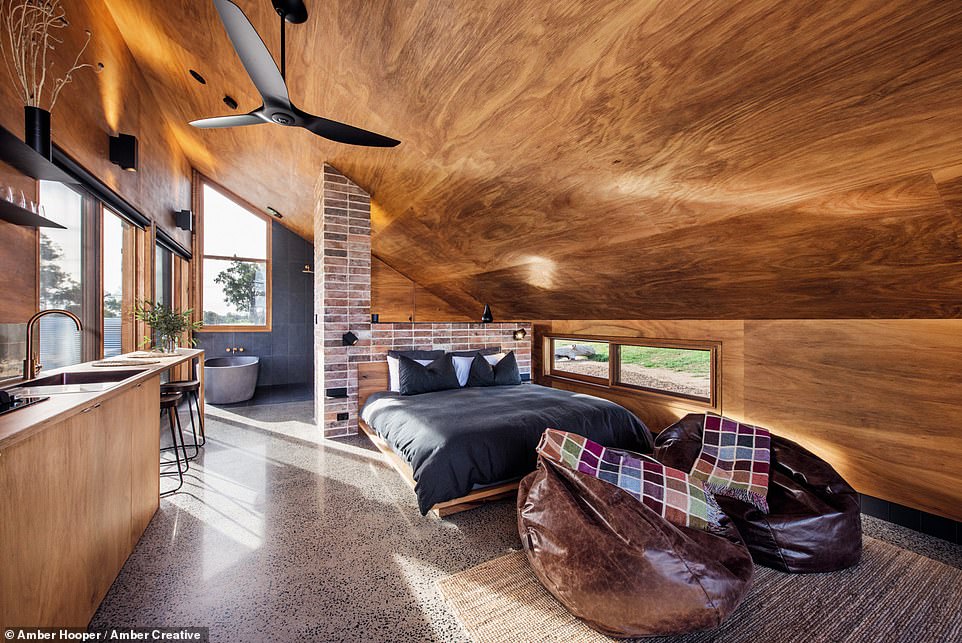 This image shows the interior of the Mudgee hut. The book says: ‘Internally, the inclined form is emphasised through a blackbutt-lined ceiling, which also frames the valley views to the east. Repurposed bricks… and fireplace form a low-height brick wall in the interior that separates bathroom functions in an otherwise open plan – designed such to maximise the cabin’s small footprint’ 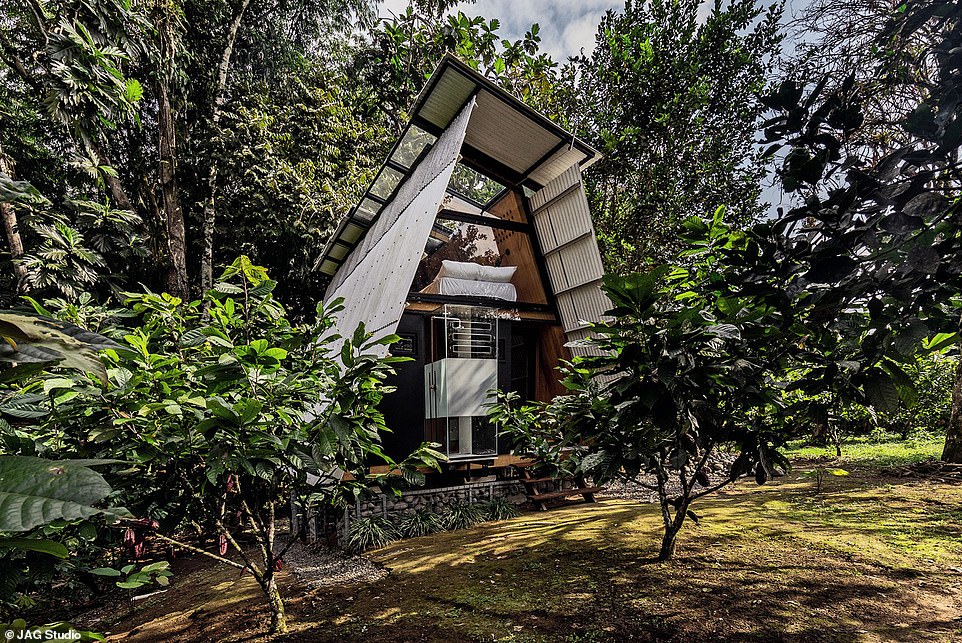 This remarkable hut sits ‘among cacao trees and lush vegetation, in front of a small river’ in Puerto Quito, Ecuador, the book explains, adding that skylights, glass doors and glass gables at both ends of the structure ‘draw natural light into the space and engulf the interior with reviving views of the wonderful greenery outside’ 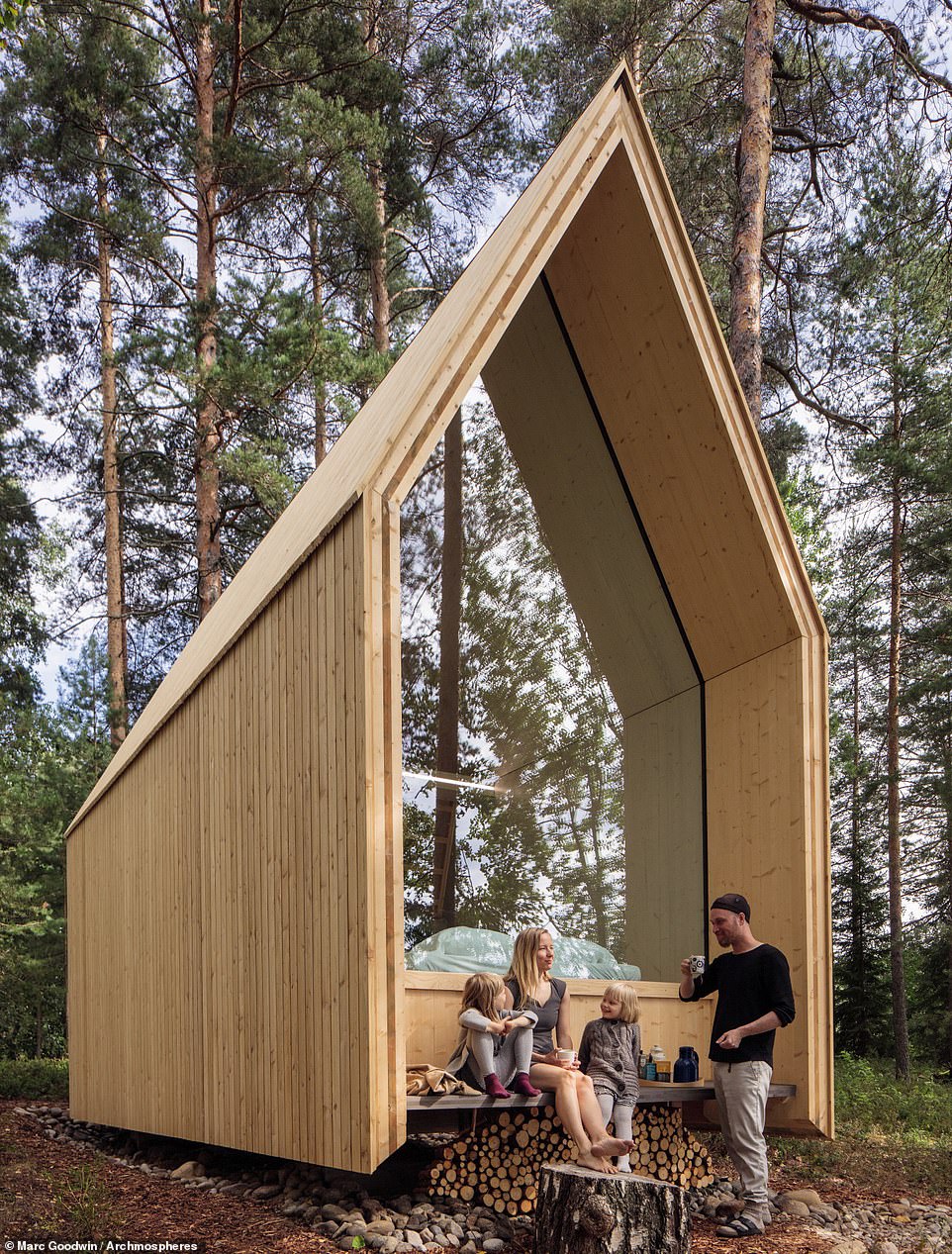 ‘Tailored to elicit the best of its surroundings, this cabin,’ says the book, ‘located in eastern Finland, on the Nunnanniemi peninsula in Lake Saimaa, sits in the middle of a pristine forest looking out toward mesmerising views over the water. The concept is zen, woven around the definition of “nothing”. The space aims to provide focus, visually and spiritually, by stripping the content and design intention to a bare minimum’ 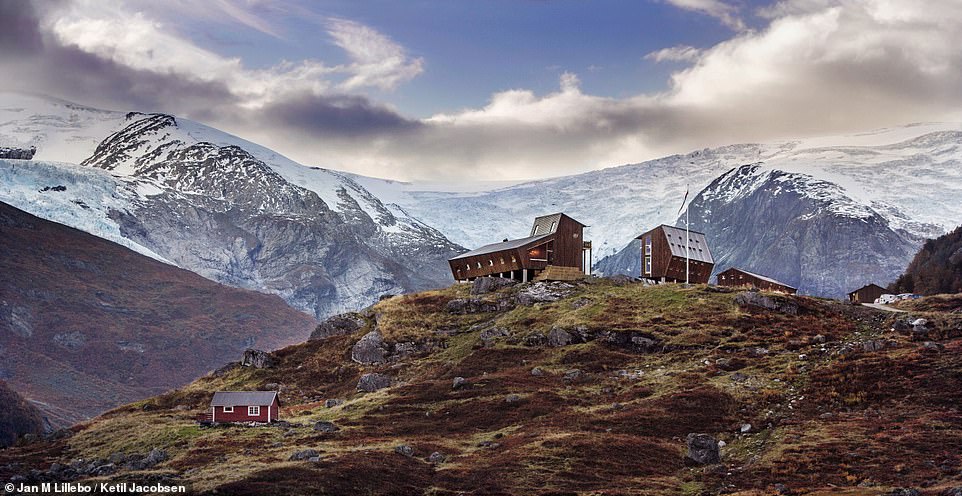 This cluster of cabins is situated on a small plateau that overlooks the ‘stunning’ Jostedalen glacier in Luster, western Norway, explains the book, adding: ‘These cabins replace the original Tungestolen Tourist Cabin destroyed by cyclone Dagmar in December 2011, which had been used for more than a century by avid glacier hikers. The new cabins offer a comfortable and generous shelter in structures meticulously designed to withstand the fast-changing weather conditions of the mountainous site. To navigate the wrath of future extreme climate, a constellation of nine robust pentagonal and oblique cabins were designed, made with wooden glulam frames, covered by sheets of CLT [cross-laminated timber], and clad in pine. The outward-facing walls have a beak-like shape to slow down strong winds sweeping up from the valley floor’ 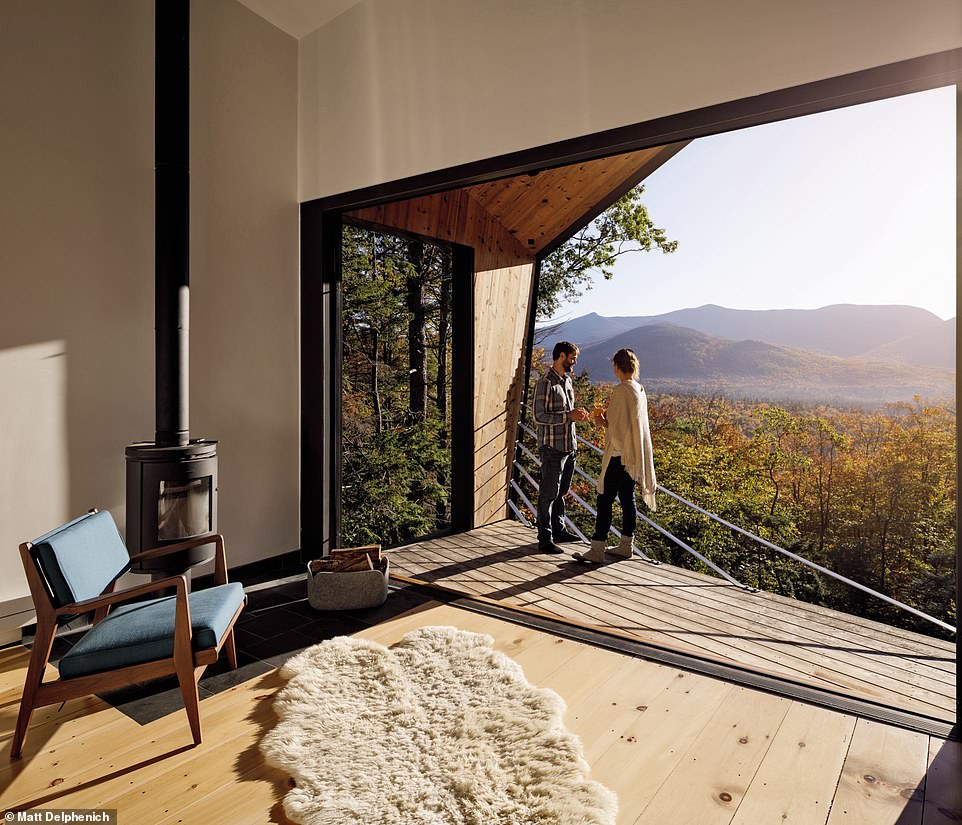 This mountainside family cabin in the White Mountains, New England, sits on a ‘seemingly treacherous and unbuildable site’. The book adds: ‘The site, known for rugged granite outcroppings, was discovered on a scouting hike and inspired unconventional design solutions to make the cabin a reality. The cabin perches on one such granite outcropping, projecting precariously over a steep drop-off to afford dramatic eastern views across the valley below.’ Boston-based firm I-Kanda Architects is behind the design 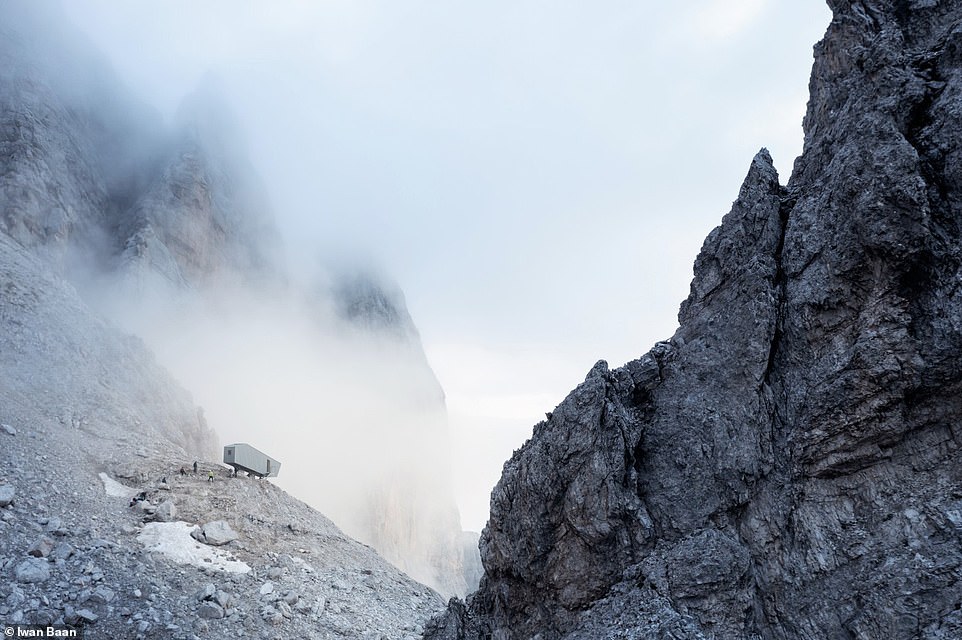 This amazing cabin – a refuge for hikers – is located on the Marmarole mountain range in Italy, 8,750 feet (2,667 metres) above sea level. The book says: ‘It seems almost like it’s teetering on the edge – the cabin frames the breathtaking landscape and connects person and environment’ 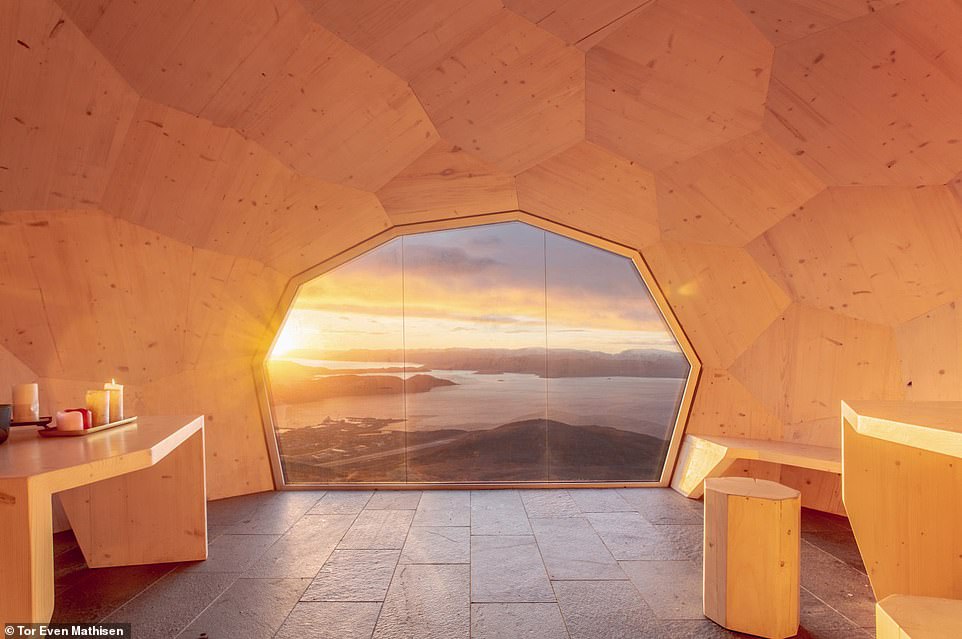 This eye-catching cabin in Hammerfest, Norway, high above the Arctic Circle is one of a group of structures designed as a ‘warm, inviting rest stop’ for hikers, with the bonus of a ‘breathtaking’ view 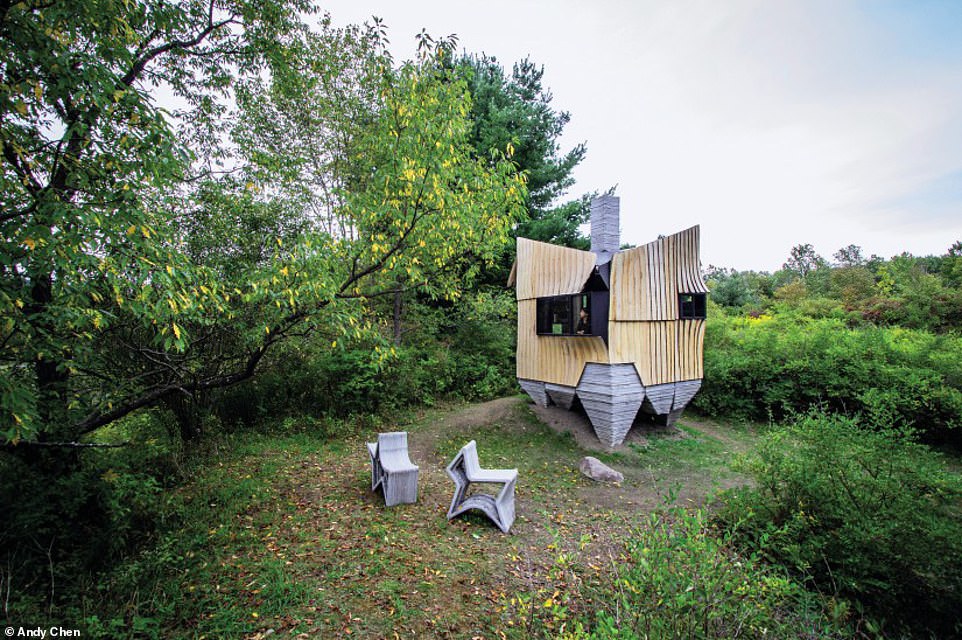 This cabin in Ithaca, New York, is an ‘escape into nature’ constructed using infested ash trees – ‘a new approach to sustainable housing design, development and construction’ 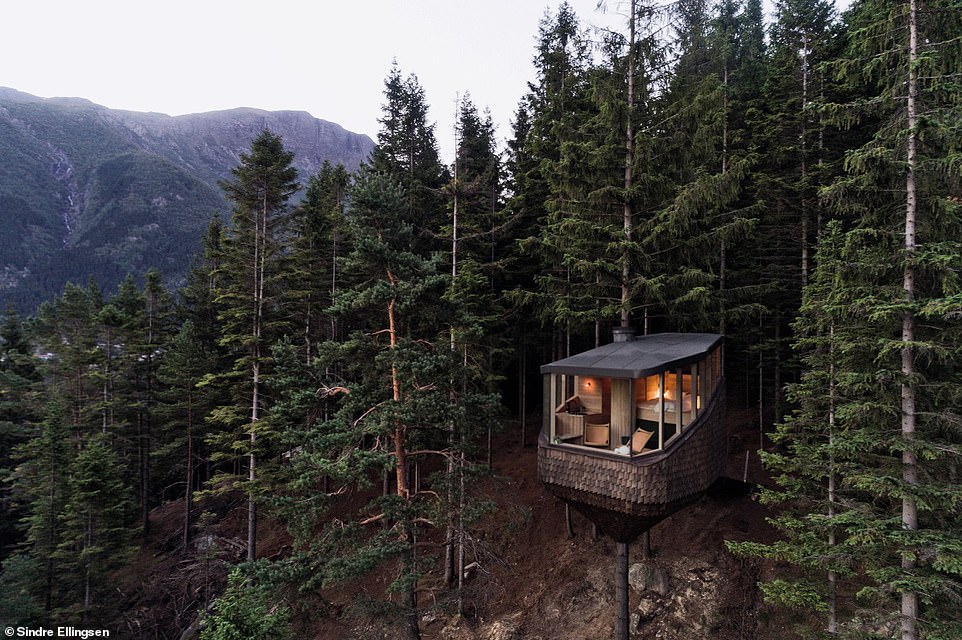 This cabin in the forested hillside around the Hardanger fjord near Odda, Norway, ‘makes every day exhilarating’, declares the book. Inside is a central tree trunk surrounded by four sleep zones, a bathroom, a kitchen and a living space. And out front, there’s a ‘spellbinding view’ 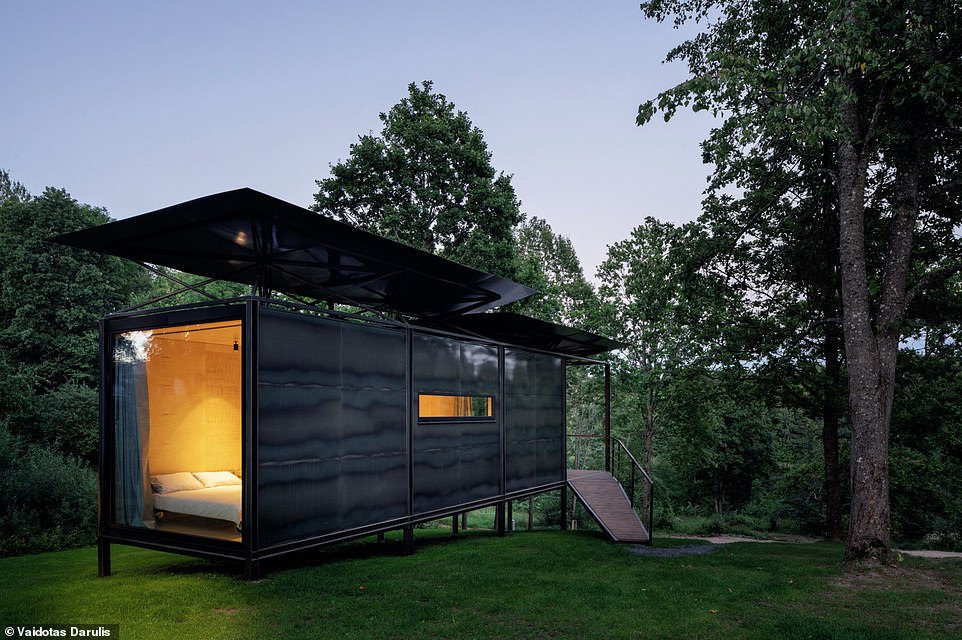 This intriguing modular cabin on Apple Island in Lithuania has two double bedrooms, a living room, kitchen and a bathroom, the book reveals. Plus, there’s a folding glass door that opens fully to ‘extend the interior to an outdoor terrace overlooking the lake [Lake Grabuosto]’