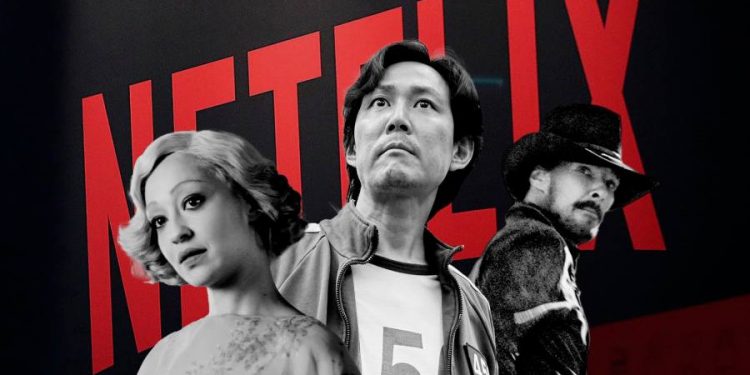 
The corporate narrative on Netflix has always been high drama. Is the streaming service a savvy disrupter that will live on forever as the first mover of online entertainment? Or is it a house of cards, pushing an unsustainable business model that all of Hollywood foolishly followed?

In the past few months, investors have leaned towards the more steely-eyed view of Netflix’s prospects. Its share price has nearly halved over that time, falling from $700 to $366, wiping away $150bn in market value. At its peak in October, Netflix traded at a multiple of more than 10 times trailing revenue, well above its peers in media such as Disney. Now it is down to 5.6 times.

Normally, Netflix’s rivals would enjoy the schadenfreude. Hollywood executives have long resented the company’s magical ability to lose money and rise in market value. But, instead, the sell-off has been unsettling because all of these companies have copied the Netflix model.

After spending several years watching Wall Street cheer on Netflix, Disney, Warner and other media giants announced in 2019 grand plans to make their own streaming services. Their stock prices benefited. Their chief executives got their bonuses. All was well.

The problem is that the long-term business case for streaming is still being tested. Streaming’s predecessor, cable TV, is expensive, inflexible and inconvenient for consumers — which is part of the reason it made a lot of money and provided income for the studios. People could cancel their cable TV packages, but it was not easy, and there was not much of an alternative.

Netflix broke the dam, and in doing so grew rapidly. At the time, it was too early to know whether Netflix would become sustainably profitable, and if so, how profitable. Nearly a decade after Netflix leapt into Hollywood, starting to produce its own content with House of Cards, we are getting a clearer picture.

In Netflix’s early days, it was easy to lap up subscribers, but recently it has become a slog in the US. Last week, Netflix stock had its worst day in a decade after reporting subscriber numbers that did not satisfy Wall Street.

But does Netflix need to keep adding a rip-roaring number of new customers to be a good business?

Netflix believers have argued that by adding more subscribers, revenue would balloon while costs would stabilise as it built up its content library. Making 100 new TV shows for its 200m subscribers is better than making those same 100 shows for 100m subscribers. As its heft grew, Netflix could also raise prices, enabling even higher revenue.

In practice, it has been more complicated. After being fed all this TV for a low price, viewers have become hungrier, stingier and more impatient. I recently signed up for a free trial of Showtime so I could see Yellowjackets, a TV show my friends were watching. I binged it all in a weekend and then cancelled the free trial, never paying anything to Showtime. Why wouldn’t I?

“The decay rate on streaming content is incredibly rapid. Squid Game? That’s so last quarter”, Michael Nathanson, a top media analyst, wrote last week. “The business model is much more capital intensive than most other models we have seen.”

So even with 222m subscribers, Netflix has to keep spending, and a lot, to satiate us. Last year, Netflix posted negative free cash flow — the money left after paying operating expenses and capital expenditure — of $159m on $30bn of revenue.

So Netflix makes a lot of revenue but much less cash flow profit, because its costs are high. In this sense, Netflix’s long-term business might look more like a telco than a tech company. The biggest US telecoms groups have to invest heavily to offer the best service, while also keeping prices low because they are effectively selling the same product as their competitors. Netflix was in its own category for a while. Now, it is surrounded by competition.

The stock market has spent the past decade rewarding Netflix for its vision and growth. For a long time, that made old studio executives angry. But what Netflix’s results have shown us recently is something more fundamentally scary for Hollywood: streaming television is going to make less money — maybe a lot less money — for entertainment companies than cable did.

“They are replacing a great model for a less great model,” says Nathanson. “By a mile.”