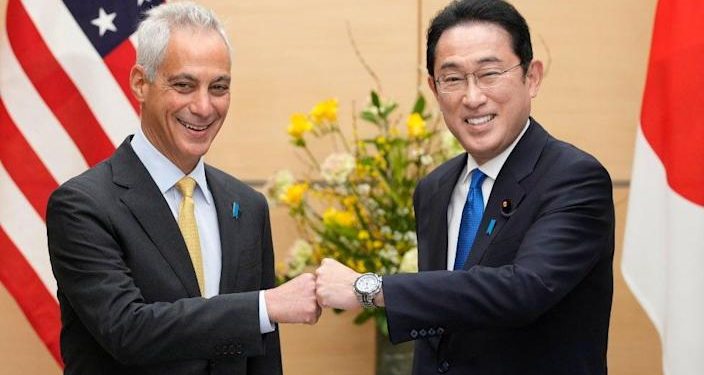 
New U.S. Ambassador to Japan Rahm Emanuel met with Japanese Prime Minister Fumio Kishida Friday, saying he would “wholeheartedly work every day on behalf of the ideals of the alliance” between the two countries, The Associated Press reports.

Emanuel spoke with Kishida about regional issues including military actions from China and missile tests from North Korea.

Kishida praised the U.S. ambassadorship, saying that it “symbolizes the iron-clad bond of the Japan-U.S. alliance” and commending the former Chicago mayor in his role.

The U.S. and Japan have recently experienced some friction due to coronavirus outbreaks spreading from U.S. military bases in the country. COVID-19 cases have grown especially in Okinawa, which houses most of the tens of thousands of American troops living in Japan.

Foreign Minister Yoshimasa Hayashi said Friday that any tension is a result of miscommunication on the part of both countries.

His confirmation was not without controversy: Multiple House progressives urged the Senate to reject his nomination over his handling of the investigation into the Chicago police shooting of Laquan McDonald in 2014.

Emanuel will be officially placed in his ambassadorship after he meets Japanese Emperor Naruhito in a palace ceremony.

The U.S. ambassadorship to Japan has been vacant since July 2019, when former Ambassador William Hagerty left the position to run for Senate.