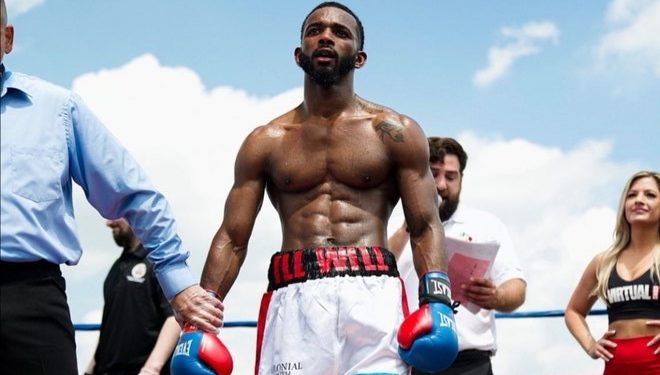 
A chandelier above a ring gives even the most intense fights a sense of class. That’ll be exemplified at CES Boxing’s Rhode Island Wars II in Providence and on UFC Fight Pass this Saturday, where a stacked card of New England up-and-comers will face off in front of an already sold-out crowd.

“Nothing but the W. That’s what I’m aiming for, you know what I mean. And that’s what I keep visualizing: nothing but a W come March 26th,” said Wilson Mascarenhas, a Massachusetts super lightweight co-headlining the card with six-rounds against an undefeated Mexican boxer named Abraham Perez. “I know he’s gonna come to fight; I know he’s a strong fighter… I’m gonna have to pull something out of me that’s a lot different from every other fight. And what I’m gonna bring to this fight is everything I’ve been working on in camp. The hard work is gonna be all laid out in the ring this Saturday,” Mascarenhas said confidently. Wilson Mascarenhas fights out of New Bedford, Massachusetts, with a 5-1 record.

“One of New England’s fastest-rising stars,” according to World Boxing News, Mascarenhas moved to the United States from Portugal at twelve. Since going pro in 2018, he has built up a dedicated fan base impressed by his ability to bob & weave and follow up with meaningful counters. “When I get in the ring, I’m fighting for everybody. I’m fighting for myself; I’m fighting for my family; I’m fighting for my brothers. That’s why I feel like I have a lot of weight on my shoulders, but it’s good weight – weight that makes me go harder every day,” he said from a sauna after a day of training.

The other headliner is a six-round featherweight brawl between seasoned Rhode Island fighter Ricky Delossantos and Yeison Vargas, a Colombian boxer with a knockout power that’s undermined only by his questionable chin.

Jimmy Burchfield Sr. started Classic Entertainment and Sports 30 years ago, and the promoter’s ability to catch rising stars early has helped him make CES one of the biggest on the scene in New England. The new Rhode Island Wars series, in particular, is focused on showcasing local prospects like hometown favorite Tim Hatfield Jr., who scored his third knockout victory in the first Rhode Island Wars card last month. Jimmy Burchfield Sr. picture with his Lightweight Contender Jamaine Ortiz, has worked with every promoter to get his fighters an opportunity.

On Saturday’s undercard, Hatfield will take on his toughest opponent to date in fellow undefeated heavyweight Quintin Sumpter, a 2020 New England Golden Gloves champ fighting out of Pittsfield, Massachusetts.

A 6-foot-6-inch former Brown University defensive tackle, Hatfield set aside medical school ambitions to focus on his dream of a world championship. His deliberate style suggests that he brings his IQ with him into the ring. “I like to think that there’s a lot of purpose behind my movement. I’m always trying to work strategy into my fights, which is why I’m such a big believer in jab first boxing. It gives me the time and separation to really see how my opponent is going to react,” he explained. “I want to really establish that I’m different and that I’m able to out-box somebody with a similar record and really showcase my boxing ability and not just my ability to end fights early.” Hatfield said that “A lot of people are gonna see I went to Brown and stuff like that and just assume that I must come from overwhelming privilege and think that I don’t have what it takes. But that’s not really the reality — I came from struggle, and I was taught by my parents to use my gifts to bring myself out of that, and I’ve worked tenaciously towards every single goal I’ve put my mind to…I just want people to be excited about watching me fight because I’m ready to put on shows.”

Standing at the top of the undercard is a Hoosier on a hot streak named Andrew Rodgers versus lightweight prospect Alejandro Paulino, a 2020 New England Golden Gloves champ who has knocked out all eight of his opponents in his nine months as a pro.

Kevin Walsh, an undefeated son of the City Of Champions – Brockton, Massachusetts – has an opportunity to build on his first five wins as a professional. Walsh fights under his mentor Rich Cappiello, a former pro and the owner of the last boxing gym in Brockton, the hometown of Marvelous Marvin Hagler and Rocky Marciano.

Rounding out the night are 2017 Italian National Boxing Team junior middleweight Nicola Quarneti and Michael Valentin, a 21-year-old Providence native and WBC ambassador who made international headlines in 2018 when he announced during a victory speech that a rare medical condition was forcing him to take a now soon-to-be concluded break from boxing. They’ll be fighting Keenan Raymond and Justin Morales, respectively, two New England boxers with a win and a loss each in their short time as professionals whose quick feet leave room for an upset or two.

The action under the chandelier starts at 7 p.m. eastern time, in Providence and on UFC Fight Pass.