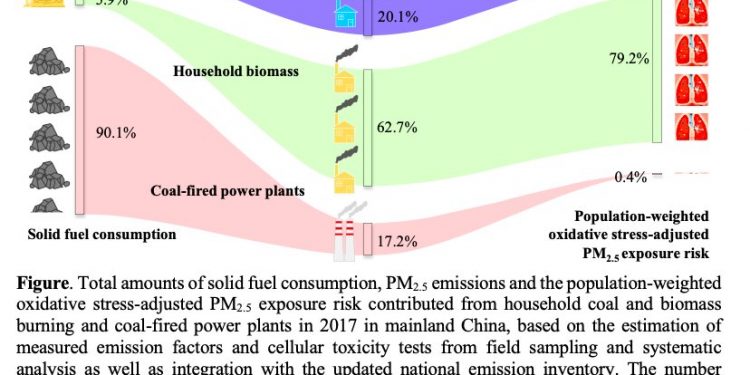 
The color of smoke coming out from chimneys can vary greatly based on its source and how it is produced. For instance, small coal or biomass stoves typically release dense, black smoke, while power generation plants produce lighter-colored plumes of smoke.

While these color differences are known to be linked to the different aerosols contained in smoke, so far not many studies have closely examined the major components of these aerosols and their effects on health. Researchers at Fudan University, Tsinghua University, and the Hong Kong Polytechnic University recently published a paper in Nature Energy outlining new interesting findings about the levels of toxicity of aerosols originating from different combustion sources, such as stoves in residential homes and coal-fired power plants (CFPPs).

“Differences in the color of smoke coming out from distinct chimneys can indicate different aerosols in plumes,” Prof. Xiangdong Li, one of the authors of the paper, told TechXplore. “A crucial question is, are the major components of aerosols from these emission sources different, and can they have different health impacts? To investigate this, we collected the aerosols from large scale CFPPs and common household stoves burning wood and coal.”

When Prof. Li and his colleagues analyzed the aerosols produced by CFPPs and common household stoves in the lab, they found that they had significant chemical differences. Interestingly, those emitted by household stoves primarily contained carbonaceous matter resulting from the incomplete combustion of coal or biomass material. On the other hand, large-scale powerplants that rely on efficient boilers could attain the complete combustion of fuels. This resulted in better pollution control metrics and a lower number of aerosols containing inorganic materials, such as transition and heavy metals.

In the second part of their study, the researchers used real cells from human lungs (i.e., pulmonary cells) to determine the toxicity of the inhalable particulate matter (PM) produced by household stoves and CFPPs. They specifically examined the generation of intracellular reactive oxygen species (ROS) prompted by the PM, as well as cell viability and toxicity.

“Combining the chemical data with our previous information on chemical toxicity, we conducted a further aerosol toxic experiment with respiratory cells,” Prof. Li said. “In this experiment, we demonstrated that the toxicity of aerosols emitted from household coal/wood burning is more than 10 times higher than that from large scale coal-fired power plants.”

The team used the data collected during this experiment to estimate the toxicity of the aerosol emissions. In addition, the same data helped them to create an advanced air quality model that simulates the ways in which aerosols disperse in the wind.

The overreaching goal of the study was to gather new insight that could help to enhance strategies for improving the quality of air and reducing pollution. Prof. Li and his colleagues hope that their findings will encourage policy-makers to update current pollution control strategies, taking the differences in aerosol-related toxicities that they identified into account.

In the Nature Energy paper, the team also proposed a series of health-oriented strategies for mitigating air pollution caused by coal-based residential stoves and CFPPs. In the future, they hope that the World Health Organization (WHO) will add these strategies to its mass concentration-oriented air quality guidelines.

“We now plan to construct a full picture of health risks of aerosols derived from all major sources and try to propose some new pollution control measures in consideration of aerosol toxicity and achieve better economic benefits,” Li added.

Citation:
New insights about the toxicity of smoke produced by home stoves and power plants (2022, February 2)
retrieved 3 February 2022
from https://techxplore.com/news/2022-02-insights-toxicity-home-stoves-power.html