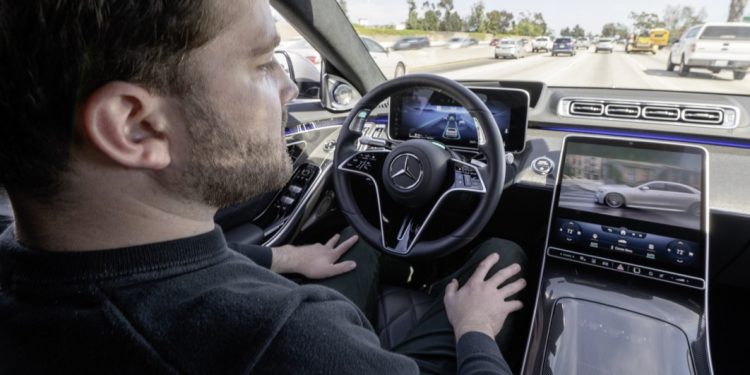 
LOS ANGELES – It’s the worst sort of L.A. traffic. That surging, accelerate-to-35-then-slam-the-brakes inconsistency that aggravates your last nerve. Oh, and there’s that driver aggressively changing lanes just in front of you, even though traffic in all lanes is pretty much stuck.

Enter Mercedes-Benz’s latest driving-assist system, Drive Pilot, which allows the car to take over and navigate this most-tedious part of a commute, allowing you to take your hands off the wheel, feet off the pedals, and eyes off the road. Really.

Drive Pilot is Mercedes’ entry into Level 3 autonomous driving, and a short demonstration showed its potential in relieving commuting stress. When combined with Bosch’s pending Automated Valet Parking system, Mercedes has integrated two technologies that remove the worst part of driving from the equation.

Of course, there are a bunch of limitations to the Drive Pilot system: It only works on well-marked, multi-lane, divided highways at speeds under 40 mph. It must be daytime. There cannot be road construction, tunnels or toll booths. The weather cannot be inclement (rain is OK, snow is a no-go). The driver must stay in their seat. And the car will only drive in its existing lane. 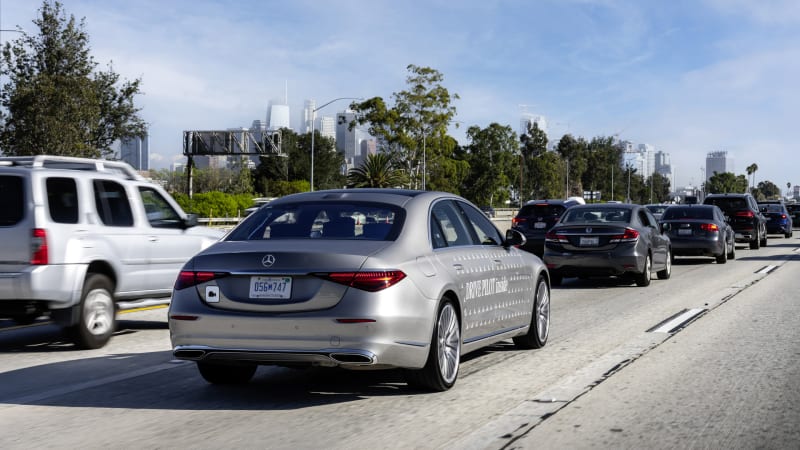 On a short drive (as a passenger) in a new S 580 4Matic along the choked Santa Monica Freeway (aka “the 10”), the Drive Pilot system comported itself flawlessly – essentially acting like the smartest of adaptive cruise controls. If the driver wanted to compose an e-mail or watch a video, the system allowed it. No need to keep a token finger on the wheel in order to stave off a warning every 15 seconds. Our “driver” – Lucas Bolster, Mercedes R&D’s principal engineer of automated driving – says Drive Pilot has driven him hands-free and eyes-averted through a 65-minute rush hour on this same stretch of road. In our brief demo, acceleration and braking was smooth, without any lurching stops, and there was no ping-ponging between the lane markers. It was the best kind of chauffeur.

At one point, a lane-jumper hinted at making inroads into our right-rear quarter-panel. The Drive Pilot adroitly swerved to the left-hand side of the lane. The system will take the car to the farthest edge of the lane marking, but will not change lanes if the other car’s incursion is insistent (that is a future development that Mercedes says is achievable). If a car intrudes in front of you, the Mercedes will politely make way. It won’t honk the horn in such an instance, but will if a car in front decides to reverse course toward you.

The Level 3 system is a step up in autonomy from Mercedes’ existing Level 2 system that has active steering, braking, and distance control, but which requires a driver to maintain attention to the car. Level 3 means that the car assumes full control (and Mercedes’ legal department assumes liability) for the car’s actions. But it also requires the driver to be able to resume control with 10 seconds’ warning from the system – if not, the car slows to a stop and turns on its flashers. So sleep lightly. 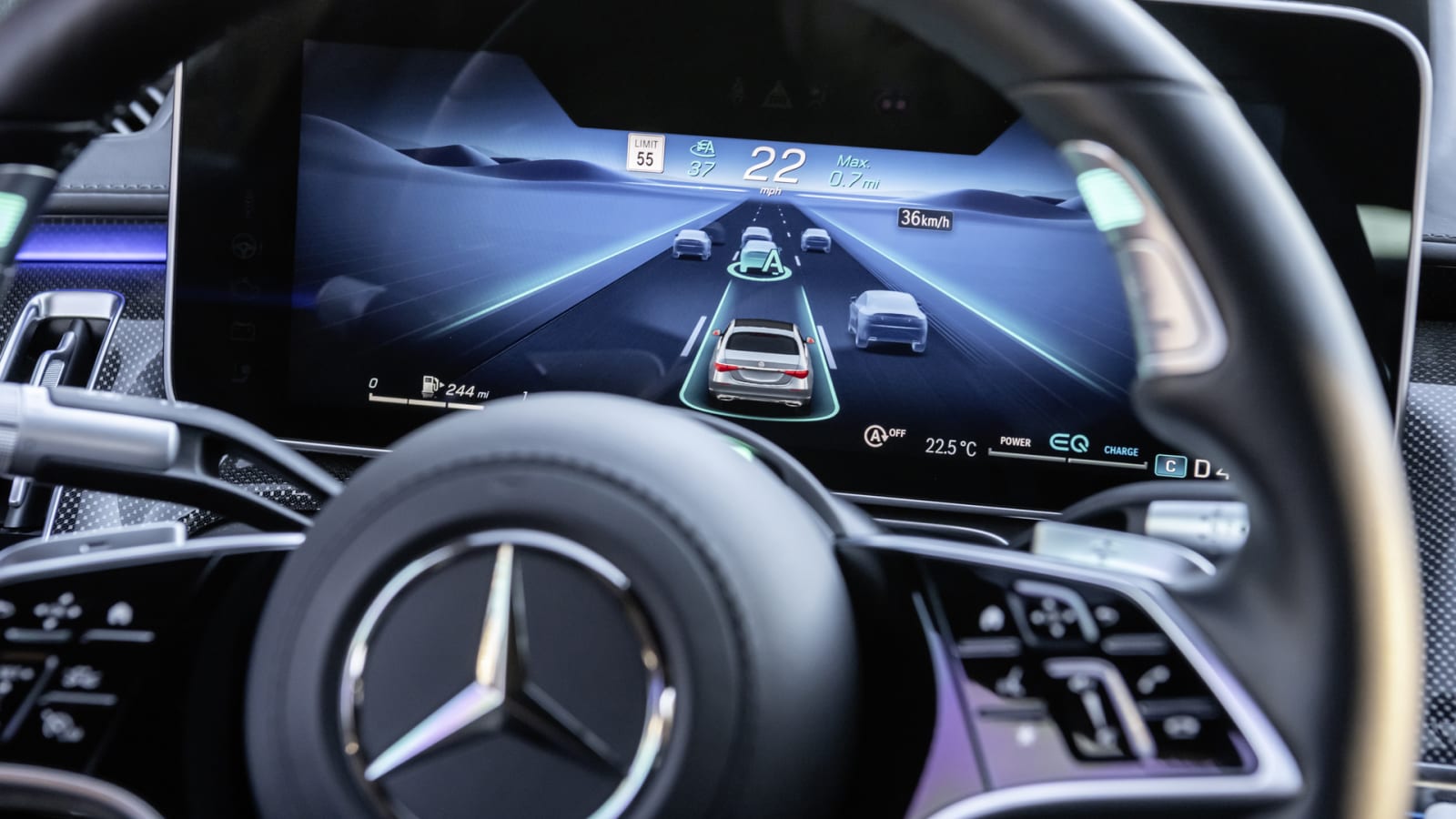 Drive Pilot will be optional in the S-Class and EQS in Germany, but it has yet to receive regulatory approval in the United States. Mercedes has already performed 50,000 miles of monitored testing in California and Nevada, and is in talks with regulators for public use, assuming other states will follow suit if those two states approve the system.

Pricing for the European market will be announced in April. No date is set for U.S. pricing. When pressed on a ballpark range, a Mercedes spokesman said Drive Pilot will cost less than $12,000 – the current price for Tesla’s still-inactive “full-self-driving” system.

How does it work? Without getting too geeky, Drive Pilot uses a combination of long-range radar, long-range LiDAR, and stereo multi-purpose cameras. The key element is the LiDAR sensor and its AI signal processing, developed by supplier Valeo, that creates 25 images per second, can see 200 meters, and classifies and tracks each object. There is even a microphone that listens for sirens. To be truly Level 3, the system requires redundant steering, braking, and power supply. The AI of the system also learns quirks of the roads for OTA updates: Do Botts Dots reflect sunlight harshly at dusk on certain stretches of road? Do “traffic memory” slowdowns occur at certain times even when there’s been no accident? 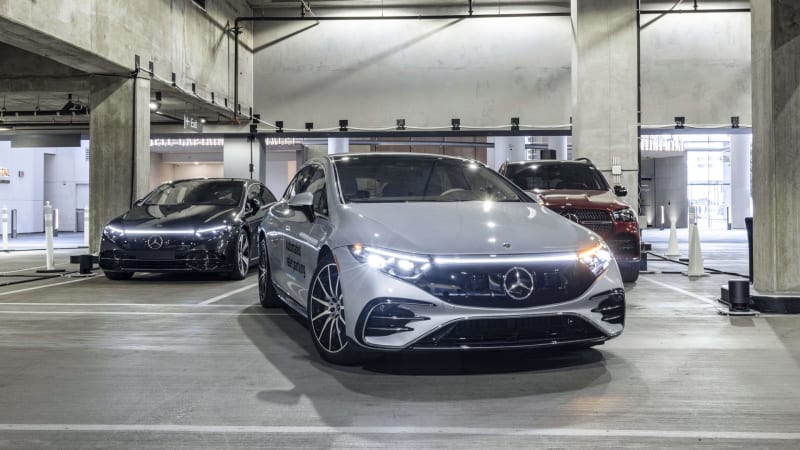 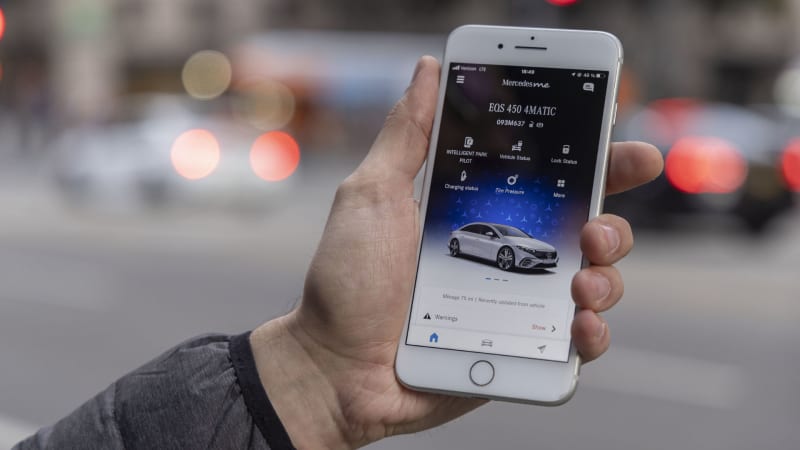 Then there is Intelligent Park Pilot (as Mercedes calls it), or Automated Valet Parking, as supplier Bosch calls it. This is dipping a toe into Level 4 autonomous driving – where a properly equipped car can enter a parking garage, find a space, and park itself with no one in the vehicle.

The technology requires much more than a Level 3-equipped vehicle. The parking garage needs ground sensors to communicate the route with the car, cloud connectivity where there might not be Wi-Fi or cellular penetration below ground, as well as a phone app that allows car owners to reserve a parking spot, release control, and summon the car, said Mariana Eichel, Bosch AVP project manager. The system will require all cars, regardless of brand, to use the same communications protocol. So while Mercedes is the first to demonstrate the system (it was recently installed at Stuttgart Airport), Bosch has developed this to work with all cars.

In a demonstration at a downtown Los Angeles hotel, a Mercedes EQS (with a driver) arrived at a specially marked drop zone in the porte cochère. After the driver exited the vehicle, the car then communicated with Bosch’s intelligent infrastructure, drove itself around a sharp bend – albeit at a crawl ­– and backed into an open parking spot.

Why would a garage spend all this money – price not disclosed – to have this tech? Well, without valet parking attendants, there are no ongoing wage bills, and the insurance liability premiums for damaged cars likely would plummet. Plus, since no one needs to get into or out of a car parked autonomously, the vehicles can be packed in like sardines, allowing for more cars and hence more revenue. Bosch is also looking at the technology for rental-car parking lots at airports, where the car comes to you, rather than you searching for it, and puts itself away at the dropoff.

Were you expecting more? Look, this is incremental technology. Regardless of Elon Musk’s boasts, there is no such thing as full self-driving. And there won’t be for years. This is an impressive next step.

Rethinking Recruitment is the Key to Finding the Best Talent