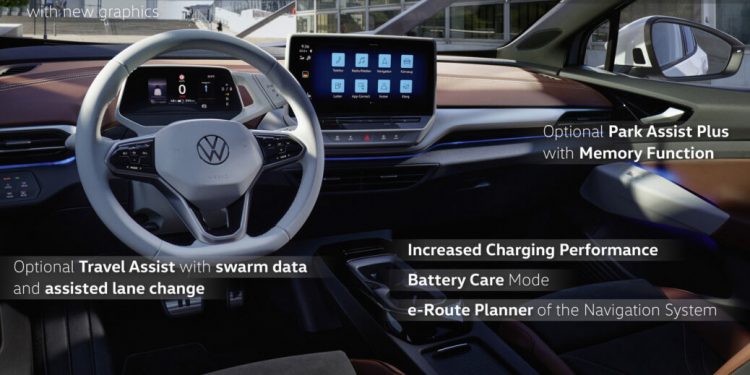 The automaker is adding many new functions to the all-electric models and optimising charging capacity. The update – with most but not all of the new features – will also be available for cars already delivered, using an OTA update available in the second quarter off 2022.

“By using swarm data and the most recent generation of driver assistance systems, Volkswagen is taking the next step towards automated driving,” the automaker said.

Optional Travel Assist with Swarm Data which automatically keeps the vehicle in the centre of the lane, adapts to the driver’s style and can also drive further to the left or right of the lane instead of exactly in the middle. It can also maintain the distance from the vehicle in front and keep to the preset speed limit. The system has predictive cruise control and turning assistance and vehicle speed can be adapted to local limits and road layouts.

With two radars at the rear and using ultrasound, the system can monitor surrounding traffic and, from 90km/h (55mph) upwards, also actively support lane changes. When activated, the lane change can be initiated and carried out by indicating provided sensors have not detected any objects in the surrounding area and the capacitive steering wheel can sense the driver’s hands. The vehicle will then steer itself into the desired lane. The driver can intervene at any time and take control of the manoeuvre.

If anonymous swarm data from other VWs is available, the new Travel Assist also works on roads where there is only one lane marking. The vehicle aligns itself with a detected lane boundary in order to stay in the lane. Swarm data further increases system availability.

Park Assist Plus can search for a parking space after it has been activated in the parking menu (up to 40km/h or 25mph) for suitable parallel parking spaces and up to 20km/h [12mph] for parking bays) and complete the manoeuvre. If desired, the assistant can park the car autonomously aided by sensors, and take full control of steering, acceleration, braking and gear changes. For this, the driver stops at the selected parking space, applies the brake and activates the parking process via a button. The system can also assist with parking manoeuvres that have already been started, by completing the process, and can also exit parallel parking spaces.

Optional Park Assist Plus with Memory Function allows the vehicle to ‘learn’ five different parking manoeuvres. A memory function records parking manoeuvres at speeds below 40km/h (25mph) with a travel distance of up to 50m (55 yards) such as carport or garage parking. The driver parks once and saves the manoeuvre and the vehicle can then repeat it as the driver monitors.

New displays. Optional augmented reality head-up display which projects important information straight into the field of vision of the windscreen, has now been expanded to include additional displays in the long-distance zone: as well as showing the assisted lane change, it also displays new symbols such as roundabouts and information on the distance to the destination. Turn arrows now appear more integrated into the surroundings. State of Charge (SOC) is also displayed as a percentage, next to a battery icon showing charge level.

The updated software also improves the optional navigation, locating the vehicle in the lane within system limits which enables it to recommend changing lanes in time for motorway junctions and exits. The lane change recommendation also appears in the ID Light the strip under the windscreen. The system now also displays local hazard warnings using Car2X technology whereby cars network directly and locally with each other via the WLANp radio standard. This enables them to notify each other of critical traffic situations in real time.

Optimised voice control now recognises voice commands much faster and more precisely and natural language character is said to make the car “an intelligent conversation partner”. The customer starts the voice control either by touching the steering wheel or voice ID and the system replies within seconds. VW now claims recognition quality for the voice control at around 95 percent. The system also recognises whether the driver or the front passenger is speaking, and follows instructions accordingly, eg adjusting the correct dual-zone air conditioning setting.

The voice control understands general phrases and colloquial questions and expressions, asks questions where necessary and lets the user interrupt. The system responds either online using cloud data or offline from information stored in the car.

Charging the 77 kWh battery with a maximum of up to 135 kW. Charging at a maximum of 135 kW (up from 125 kW) is now possible while improvements to battery thermal management can increase the range, especially in cold weather. A new Battery Care Mode limits SOC charge level to 80 percent.

Smart e-route planner. The charging menu, which now appears on the first screen of the touch display, is now more informative and clear. The online route calculator creates a multi-stop route to get the car to destination as quickly as possible. It takes traffic and route data into account, as well as the desired SOC upon arrival at the final destination and interim destination. Charging stops are evaluated and based on charge station output. Route planning may suggest two short charging processes with high power instead of a single long stop with low power.