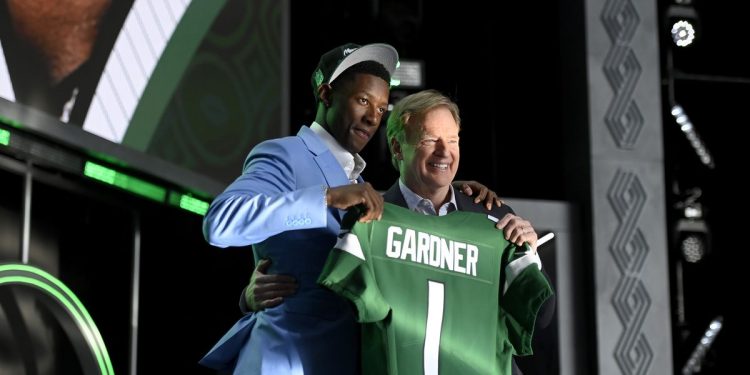 The 2022 NFL Draft is finished. There are seven new members of the New York Jets.

It will take a few years for us to truly know how well the Jets did with their picks, but that won’t stop media pundits from weighing in right now.

Let’s take a look at preliminary Draft grades for the Jets. If you go forward, I ask that you remember the golden rule.

Draft grades are stupid…unless they praise the Jets.

Entering this draft, the Jets had an extra first-round pick (from the Jamal Adams trade) and an extra second-round pick (from the Sam Darnold trade), giving them two in the top 10 and four in the top 38. And after another last-place finish in the AFC East — their fifth in six seasons — I thought they’d choose two prospects from three positions — offensive live, wide receiver and cornerback — with their top two picks. And that’s exactly what they did.

The Jets selected my top-ranked corner in Ahmad “Sauce” Gardner (4) and my top-ranked wideout in Garrett Wilson (10), each of whom has All-Pro skill sets. Then they moved back into Round 1 to take Jermaine Johnson II (26), who had fallen down the board. He is a really solid, all-around defensive end who had 12 sacks last season and was the best prospect at the Senior Bowl in January. I had Johnson No. 11 on my Big Board. Those are three rookie starters from general manager Joe Douglas, for a team that needed a talent infusion at all three positions.

And still, Douglas & Co. had an early-second round pick to get a good player, and they landed my top-ranked running back, Breece Hall (36), a touchdown maker with some tools to be a weapon in the passing game. That’s three of my top prospects at their respective positions drafted by the Jets — and an awesome class from Douglas.

The only slight knock here is waiting until Round 4 for an offensive tackle, which means they must be OK with George Fant and Mekhi Becton in 2022. Max Mitchell (111) is more of a developmental prospect who can be the swing tackle early in his career. I do think Jeremy Ruckert (101) could be a useful tight end in backing up C.J. Uzomah. Overall, this is one of the best groups of 2022.

Jets fans were thrilled to see the team get an outstanding corner in Gardner, elusive receiver in Wilson and power rusher in Johnson all in the first round. General manager Joe Douglas moved up to get Johnson and Hall (the best back in the draft) without losing significant value. He chose Ruckert over other needs in the third, but the former Buckeye has the potential to be a nice blocker/receiver as a pro.

Mitchell will be at least a valuable swing tackle on Sundays, if not a starter on the right side. The Jets added another power rusher in Clemons on Day 3, but their lack of picks in Rounds 5-7 means they’ll have to add some top-notch undrafted free agents.

The Jets have been in a vicious cycle of late. The end of the Mike Tannenbaum era carried a chips-all-in mentality balanced by the John Idzik era of savings and pragmatism (though most of the draft picks they acquired failed to produce). This was followed by a disastrous Mike Maccagnan regime that buried the franchise … until now? As we mentioned in our draft night recap, I’m not sure people understand how difficult a job Joe Douglas had and how far the roster has come. With this class, the team should be able to start seeing some results. Ruckert was an interesting pickup. On film at Ohio State, he carried some of the exact same responsibilities as Kyle Jusczcyk and George Kittle do in the 49ers’ offense, down to some of the minute, arc-motion-style blocking. This should be a real plug-and-play scenario for the Jets, who needed more players intimately familiar with the way offensive coordinator Mike LaFleur wants to run his offense. Hall is exactly what Zach Wilson and the offense needs: a running back who can turn a play dead in the backfield into something. At Iowa State, he rescued the Cyclones from time to time when their offensive line was plowed over.

Full credit to Jets general manager Joe Douglas – he had a ton of draft capital at his disposal and he put it to good use. The New York Jets added Sauce Gardner at the start of the first round, a pairing that I saw coming from miles away and was writing about back in January. Gardner looks every bit like a Richard Sherman clone, which draws comparisons to the defense Robert Saleh built in San Francisco with the 49ers. Then they gave Zach Wilson an explosive weapon on the outside with Garrett Wilson with their second pick in the first round, a receiver that many viewed as the top option in this class.

But the Jets were not done, adding to the edge as well with a trade back into the first round for Jermaine Johnson II, an experienced pass rusher with a complete tool-kit off the edge. Putting him across from Carl Lawson will be huge for this defense.

Then on the second night of the draft they added Breece Hall early in the second round, which gives the Jets a solid 1-2 tandem between him and Michael Carter, and their skill-sets complement each other’s perfectly. In the third round, despite having signed C.J. Uzomah in free agency, they brought in Ohio State tight end Jeremy Ruckert, who might put up better numbers in the pros than he did at Ohio State, when he was playing with the likes of Wilson and Chris Olave — a pair of top-15 receivers in the draft — every Saturday.

Also, keep an eye on Max Mitchell, the tackle from Louisiana. He was a four-year starter and saw time at both left and right tackle, and is a technically sound as it gets for a prospect.

It may seem easy or even lazy to praise the team that had three-first round selections, and that’s partially attributable to the Jets being a bad club in 2021. But it goes deeper than that. GM Joe Douglas fully reaped the rewards this year of offloading S Jamal Adams and QB Sam Darnold – players he didn’t draft – which is really why the Jets had so much draft capital at their disposal. And it sure appeared that Douglas leveraged it wisely. CB Ahmad “Sauce” Gardner (No. 4 overall), WR Garrett Wilson (No. 10) and RB Breece Hall (No. 36) were each arguably the best players at their respective positions this year. And by trading back into the first round at No. 26 for Florida State pass rusher Jermaine Johnson II, Douglas might have scored one of the great value selections given Johnson was regarded as a top-10 pick in some circles. If the Jets are ever going to get off the tarmac, Douglas’ past two drafts will almost certainly be the primary reasons why. Grade: A+

I’m stunned. This class was damn near perfection from the Jets. I believe they ended up with four first round talents, and just kept finding value down the entire board. Jermaine Johnson II is slightly ahead for the value they found on the trade up, but honestly you could pick Johnson II, Sauce Gardner, Garrett Wilson or Breece Hall and make a convincing argument why each was the best pick. This was a franchise-defining class, and it has the strength to bring the Jets back into relevance.

So there you have it. This year’s Draft grades certainly aren’t stupid.