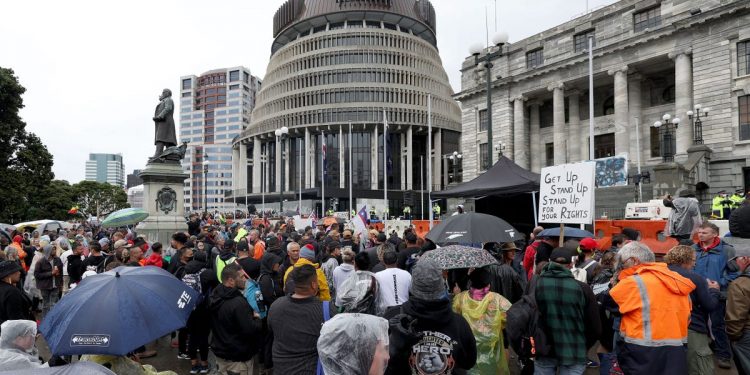 
New Zealand officials stepped up efforts to drive out anti-vaccine mandate protesters on Saturday — by playing Barry Manilow songs and the 1993 dance hit “Macarena” by the Spanish group Los del Río on a loop.

The protests started on Tuesday when a convoy of trucks and cars arrived in Wellington, New Zealand, inspired by the trucker convoy protest in Canada that has lasted weeks. Some vehicles have been parked and are blocking roads in the country’s capital.

At its peak, the New Zealand protest drew more than 1,000 people, but as of Saturday only several hundred protesters remained, occupying the grounds outside Parliament, the Associated Press reported.

More than 120 protesters were arrested this week after Parliament grounds were closed and a trespass order was issued, New Zealand police said Thursday. Police working to clear out protesters have not been wearing riot gear or carrying guns, according to AP.

On Friday, officials turned to water to try and force the remaining protesters out, spraying them with sprinklers, Insider’s Jake Epstein reported. Protesters responded by building trenches to direct the water away from their camps.

“No-one who is here is here legally, and if they’re getting wet from below as well as above, they’re likely to be a little bit less comfortable and more likely to go home,” New Zealand House Speaker Trevor Mallard, who issued the sprinkler order, said a statement to media on Friday.

More protesters arrived on Saturday, some bringing bales of hay to lay over the soaked grounds, AP reported. Mallard came up with a new plan to force the protesters away: blare pro-vaccine messaging, Barry Manilow songs, and “Macarena” on repeat.

The vast majority of New Zealanders, 94%, are fully vaccinated against COVID-19, according to the country’s Ministry of Health.

Protests inspired by the “Freedom Convoy” trucker protest in Canada have also popped up in France and some groups online are discussing staging similar protests in the US.

The protest in Canada began when truckers drove across the country and arrived in Ottawa at the end of January to protest vaccine mandates for truckers who cross the US-Canada border. The protest, which is still ongoing, has since evolved to include opposition to other public health measures.

As of Saturday, police were in a standoff with protesters who were blocking a key bridge between the US and Canada.