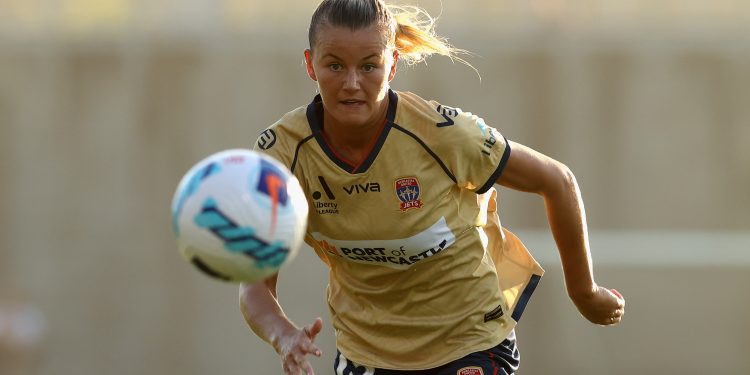 
A maiden goal from American Elizabeth Eddy rescued an A-League Women’s point for the Newcastle Jets and denied Perth Glory a drought-breaking win at the end of a difficult week.

It would have been a big tonic for a Glory side depleted by injuries and COVID-19 cases, with the latter including head coach Alex Epakis, who couldn’t attend the match at the No.2 Sportsground in Newcastle.

The Jets, who hadn’t played since December 27 and had experienced COVID-related issues of their own, drew level in the 77th minute, when Lauren Allan threaded the ball through to Eddy, who scored with a shot from just inside the penalty area.

Each half followed a similar pattern, with Perth creating more in the early stages and Newcastle having better opportunities in the latter part.

“We’ve had a few injuries but I think It just shows the resilience in the squad, we’ve got lots off depth this season,” Lowry said.

“I think the players we brought in did really well tonight and they should be really proud of themselves.”

Newcastle goalkeeper Claire Coelho kept her side in the game with some fine saves and her team came closest to finding a late winner in a entertaining contest.

“I thought we created enough chances to win the same, but for us making sure we didn’t lose and making sure we got that point was important,” Jets coach Ash Wilson said.

Perth looked the more dangerous side early on with Lisa De Vanna going close with a header and some of her teammates having shots blocked.

Newcastle created more chances later in the half with Sophie Harding and Ashlee Brodigan each having a couple of shots.

Brodigan came closest to opening the scoring In the first half, but her 40th minute close range shot was blocked by the legs of Glory goalkeeper Morgan Aquino.

Lowry gave Glory the lead when she beautifully controlled a ball over the top from Mie Leth Jans and turned and fired the ball into the net.

De Vanna made one of her trademark surging runs and forced a fine save out of Coelho.

From the ensuing corner, Glory captain Natasha Rigby headed against the bar.

Coelho pulled of a superb save from a powerful Deborah-Anne De La Harpe free kick to ensure Newcastle remained in the game and Eddy secured them a hard earned point. Western Sydney Wanderers have announced the signing of Matildas defender Alexandra Huynh to their A-League side.

I’m buying a home with my 74-year-old mother, but the mortgage will be in my name. How should we title the house?

I'm buying a home with my 74-year-old mother, but the mortgage will be in my name. How should we title the house?