The NHS contact-tracing app has prevented the transmission of hundreds of thousands of Covid-19 cases in England and Wales, researchers have estimated, in one of the world’s first studies of efficacy of the smartphone-based system developed in conjunction with Apple and Google.

Researchers at the Alan Turing Institute and Oxford university have estimated that every 1 per cent increase in app users can reduce coronavirus cases by as much as 2.3 per cent.

The app has sent 1.7m notifications to its more than 21m users telling people to isolate so far. Of those, the Turing/Oxford researchers estimate that about 600,000 cases were averted by the end of December.

Matt Hancock, the health secretary, and Sir Keir Starmer, the Labour leader, have been among those told to self-isolate in recent weeks after coming into contact with someone later diagnosed with coronavirus.

Gauging the effectiveness of Bluetooth-based proximity detection apps, which have been released by governments all over the world, has been complicated by the privacy protections built into the Google/Apple system.

The app’s anonymity means that it is impossible to say how many people have complied with its orders to isolate.

The Turing/Oxford researchers used the limited location information that users are asked to enter when they download the app — the first half of their area’s postcode — to compare app uptake between neighbouring local authorities.

That data was then compared with the overall number of Covid-19 cases reported by each local authority. The researchers found a strong correlation between app usage, which varies between 15 to 45 per cent of the overall population, and case numbers in a given region.

The NHS app ranks alongside that of Germany, which said last week that 25.4m people had downloaded its Corona-Warn app, and Switzerland as one of the most widely used contact-tracing apps in Europe. 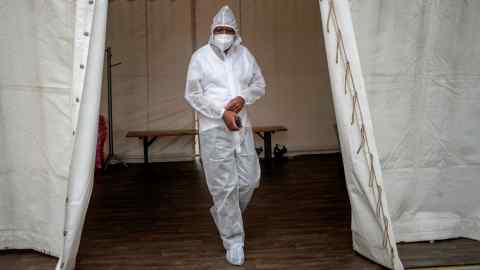 “The NHS Covid-19 app now runs on tens of millions of phones, making it one of the world’s most downloaded medical software products,” said Wolfgang Emmerich, chief executive of Zühlke UK, the Swiss IT company that developed the app.

More than 56 per cent of the eligible English and Welsh population, including smartphone owners aged 16 and over, have downloaded the NHS Covid-19 app since it was relaunched using the Apple/Google technology in September, according to the Department of Health and Social Care. That is just over a third of the total population of England and Wales.

But millions of people have deactivated or uninstalled the app, in part because of fears that they will be told to self-isolate unnecessarily.

People involved in its development are eager to see the UK government give the app a renewed promotional push before lockdowns ease, even when a large portion of the population has been vaccinated, as the virus will still be transmissible.

Another study by researchers in Spain, published in Nature earlier this year, estimated that at least 33 per cent of the country’s population had downloaded the Radar Covid app, which is also based on Apple and Google’s system.

Each infected individual was able to notify 6.3 contacts that had been in proximity, twice as many as Spain’s manual contact-tracing system would typically reach.

‘This is absolutely insane’: Bernardi