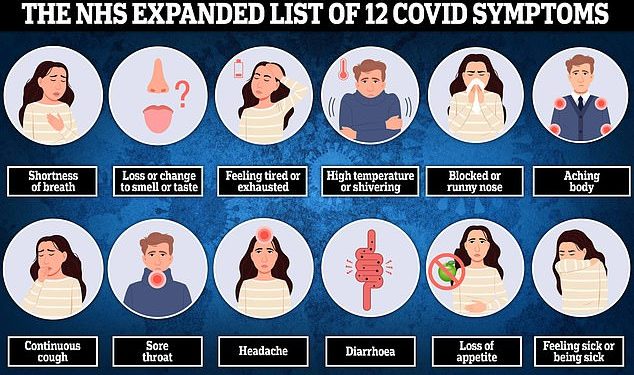 
Body aches, a runny nose and diarrhoea are among the nine new signs of Covid that have been added to the NHS symptom list.

The health service quietly expanded its list of all the tell-tale signs of the virus to also include a loss of appetite, feeling or being sick and a headache.

Since the start of the pandemic, officials have only accepted three symptoms: a high temperature, a cough and a loss or change to taste or smell, despite other countries and health bodies including up to 14.

The move — which critics claim has come two years too late — comes just days after No10 ended free Covid tests for all, with infections hitting an all-time high.

Only health and social care workers, the elderly and the most vulnerable Britons are still able to access the tests for free. 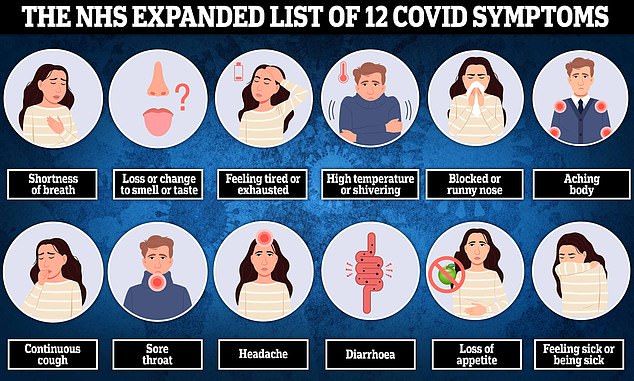 Since the start of the pandemic, the NHS has only listed three Covid symptoms: a high temperature, a cough and a loss or change to taste or smell. But it has now quietly expanded its list of all the tell-tale signs of the virus to also include a loss of appetite, feeling or being sick and a headache. Shortness of breath, feeling tired, an aching body, a sore throat, a blocked or runny nose and diarrhoea were also added to the list 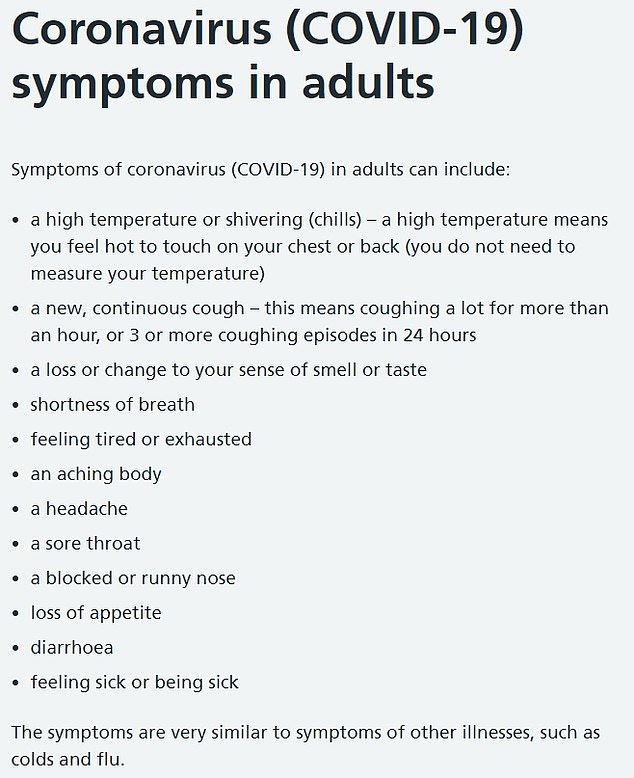 The health service on Friday expanded its list of the tell-tale signs of the virus to also include a loss of appetite, feeling or being sick and a headache. Since the start of the pandemic, health chiefs have pointed to a high temperature, a cough and a loss or change to taste or smell as the only three symptoms of the virus

The NHS notes on its website that the symptoms are ‘very similar to symptoms of other illnesses, such as colds and flu’.

Professor Tim Spector, lead scientist of the Zoe Covid symptom tracker app, wrote on Twitter that the change comes after two years of urging health chiefs to expand the list.

According to the NHS updated list, symptoms of Covid in adults can include:

‘Pity they have the order wrong – but it’s a start and could help reduce infections.’

It is understood that the Government’s chief medical officer would have needed to sign off on the expanded list of symptoms.

In March, Professor Spector was highly critical of the Government for not recognising a broader list of virus symptoms.

He said at the time: ‘The Government’s refusal to recognise the wide array of symptoms and to drop isolation advice and testing is likely driving the incredible number of cases we see today.

‘Many people are no longer isolating when they have symptoms, either because they feel they don’t have to anymore or because they or their employers still don’t recognise symptoms like runny nose or sore throat as Covid.’

The World Health Organization lists 13 symptoms of the virus, including four not listed by the NHS: a rash or discolouration of the fingers or toes, red or irritated eyes, loss of speech or mobility and chest pain.

Meanwhile, the US Centers for Disease Control and Prevention symptom list is the same as the NHS website, although it does not include a loss of appetite.

And the European Centre for Disease Prevention and Control lists 12 symptoms, while Germany acknowledges 14.

Professor Spector told MailOnline adding more symptoms to the NHS list ‘is definitely a step in the right direction and it could help reduce infections as we go forward’.

‘However, whilst this is good news, I’d like to see the order of the symptoms changed, as the NHS list puts far too much emphasis on symptoms like fever, and anosmia, which we know are much less common since the Omicron variant emerged,’ he said.

Professor Spector added: ‘According to the ZOE COVID Study, the top five symptoms being reported by contributors with a positive Covid test are; runny nose (83 per cent), fatigue (71 per cent), sore throat (69 per cent), headache (69 per cent) and sneezing (68 per cent).’

‘It seems this decision has been made in light of the changes to testing.

‘We were always told that the barrier to expanding the list was that adding more symptoms could overwhelm the testing capacity, so it makes sense that since free testing has now stopped, the list has been updated.’

The move for the UK to recognise more symptoms comes as Covid tests are now only available for certain groups.

Most people will now have to purchase the swabs from high street stores, where they are available for about £2 each.

England has ended its offer of free swabs under its plans to ‘live with’ the virus and following pressure from the Treasury over the bill — which ministers claimed cost £2billion in January at the height of the Omicron wave.

Scotland will end its offer next month, while Wales is to stop handing out the swabs this summer. 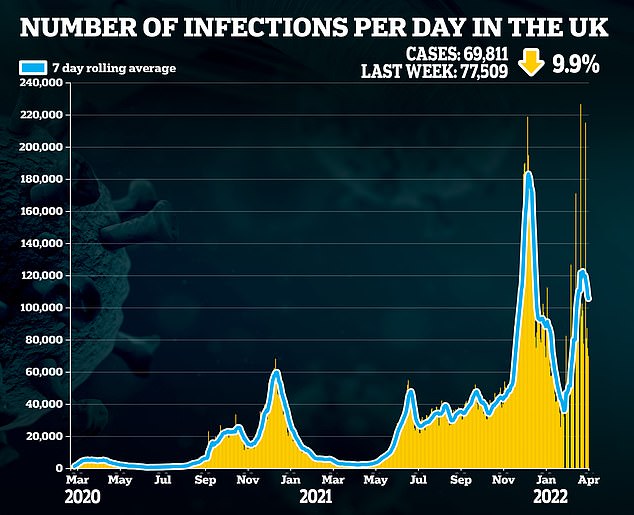 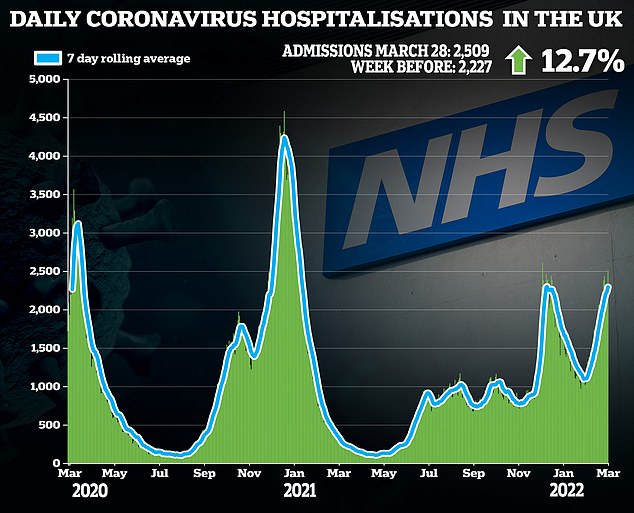 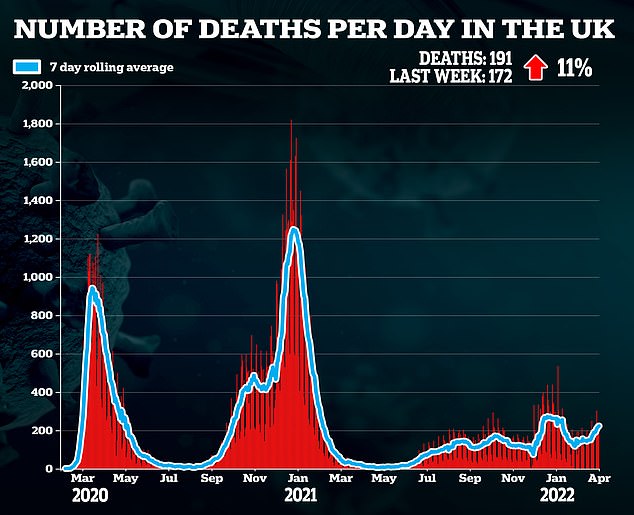 Experts argued the timing of the end of free testing ‘couldn’t really be worse’, and that the country would now have to rely on the public ‘doing the right thing’ and getting tested when unwell.

But ministers have insisted it is the ‘right’ moment to scrap the mass-testing regime, which cost No10 up to £2bn-a-month. Only the most vulnerable and health care workers are still able to get free swabs.

It comes as the Office for National Statistics (ONS), which runs the UK’s biggest Covid prevalence study, estimated more than 4.1million people had the virus on any given day over the week to March 26, equivalent to one in 13 being infected.

The figure is the highest ever recorded in England, topping the previous peak of 3.7m at the height of the Omicron wave in January. It is also 18 per cent higher than one week earlier.

In the most Covid-ridden towns of Bournemouth, Poole and Christchurch, as many as one in nine people were thought to have the virus. And infections have soared to pandemic highs in all over-35s.

Britain’s outbreak as a whole is also bigger than ever, with 4.9million now thought to be infected — up from 4.3million last week.

Meet the ‘crypto caucus’: the US lawmakers defending digital coins

Meet the ‘crypto caucus’: the US lawmakers defending digital coins