Nick Kyrgios is battling hard to keep his Australian Open campaign alive, saving two match points to hang on in the fourth set.

The Australian world No.47 is in the middle of a gripping battle when he took on Frenchman Ugo Humbert on his favourite court John Cain Arena at Melbourne Park.

Kyrgios has already destroyed a racquet after he lost the first set 7-5 before clawing his way back to clinch the second set 6-4.

He’s in a desperate battle to stay alive after Humbert reclaimed the lead to win the third set, where Kyrgios was issued with a code violation for racquet abuse.

Humbert broke Kyrgios’ serve early in the fourth set and was up 5-4 with two break points but the Australian incredibly fought back to salvage the match.

His comeback was so successful that he stunned the increasingly excited crowd to win the fourth set and force a fifth and deciding set.

Kyrgios momentarily lost his cool midway through the first set when he was called for a let multiple times, despite believing his serve was above the net.

Emotions ran high again over the net sensor while Kyrgios was serving to win the second set.

A furious Kyrgios let his emotions gets the better of him again in the early in the fifth set.

‘That was over the net by this much. It’s here bro. It’s here! Right here,’ he yelled at chair umpire Marijana Veljovic.

‘Look at the score, man. It’s ruining the game.’

Earlier on in the match, a frustrated Kyrgios threatened to stop playing if the sensor wasn’t fixed. 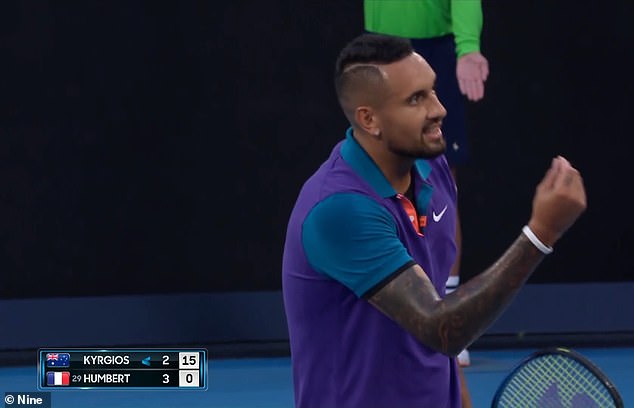 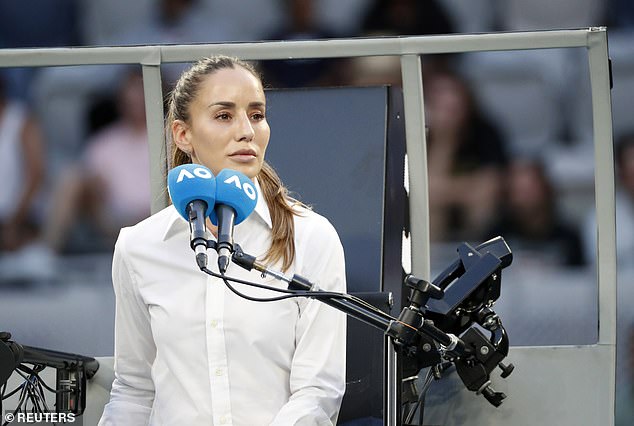 ‘Just turn the machine off. Turn it off. Come on man. Like, yeah, it happened to his serve and it was this far over the net,’he told chair umpire Marijana Veljovic.

‘Also my serve. It’s ruining the game. Do you not understand that? You don’t understand it.  Look at the score.’

Kyrgios argued: ‘It’s ruining the game though. What – how do you understand that? It happened in the first set. I told you to turn it off. Did you turn it off?’

Veljovic was seen checking the net sensor after Kyrgios won the second set 6-4.

His fiery temper was on display when he threw away his racquet in disgust after he lost the first set 7-5. 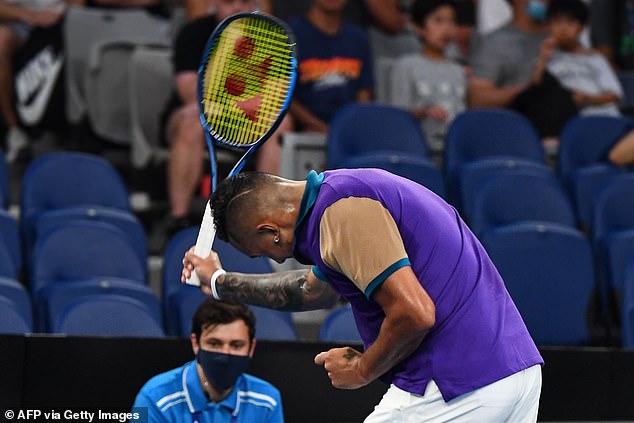 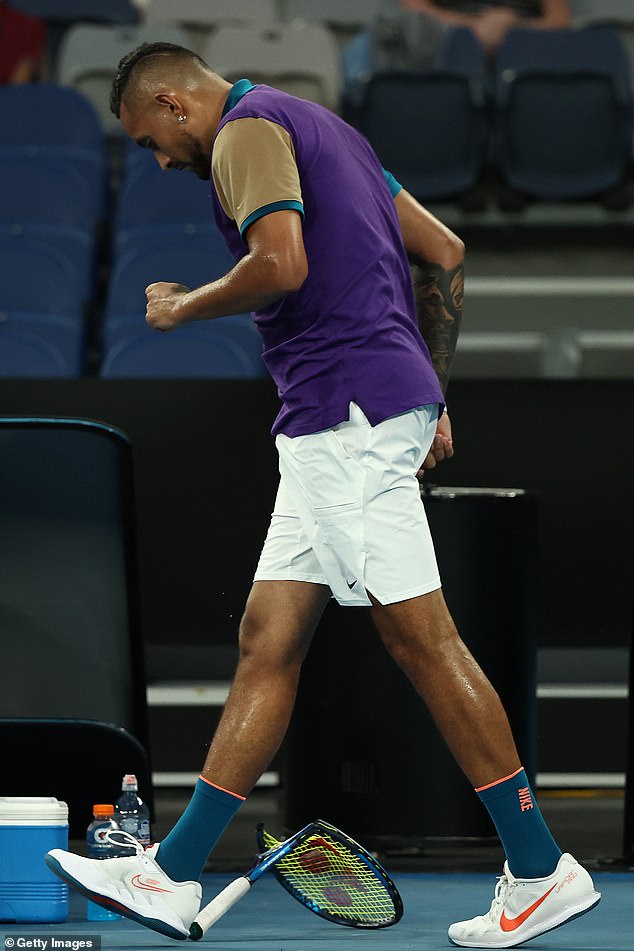 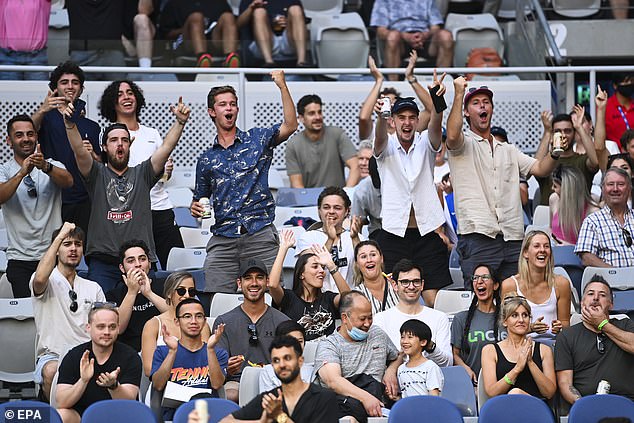 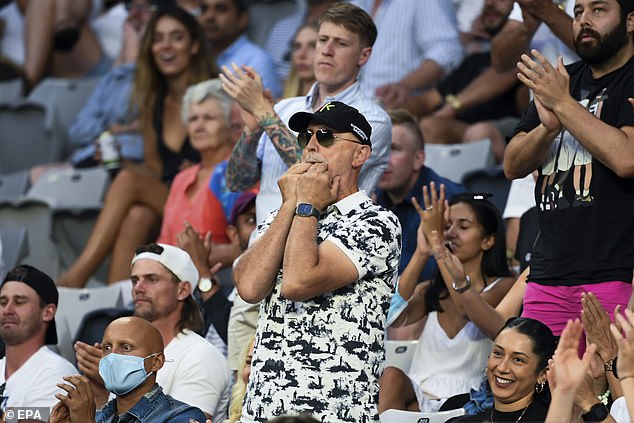 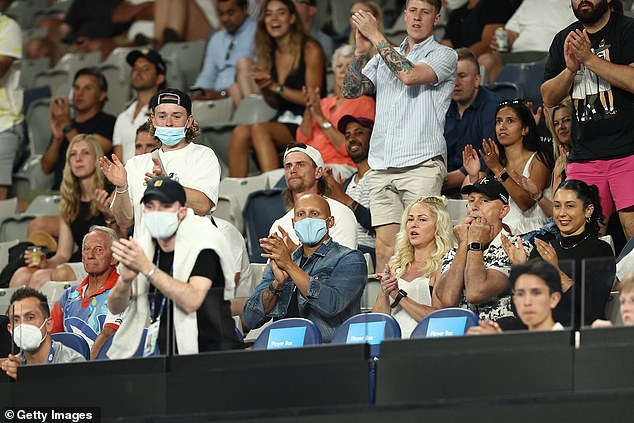 That was on top of his earlier run-in with Veljovic.

‘Reset the machine, because the ball is this far off the net. Look at the replay,’ a fired up Kyrgios told chair umpire.

She replied: ‘I can’t do anything about it now.’

‘Obviously something is wrong, so reset the machine,’ Kyrgios repeated.

‘Definitely won’t blame Kyrgios if he gets distracted by the umpire tonight.’

It’s not the first time Veljovic has stolen the show at the Australian Open. 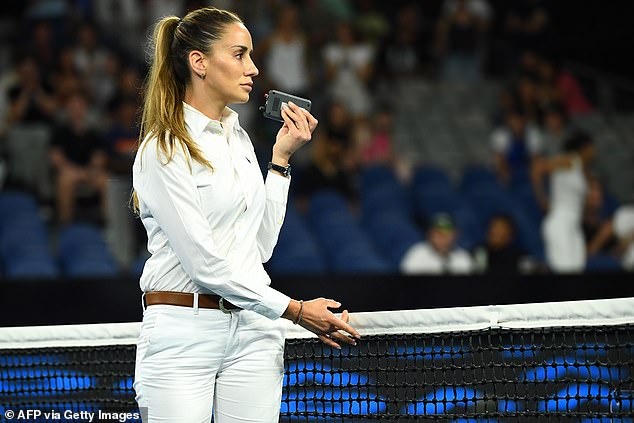 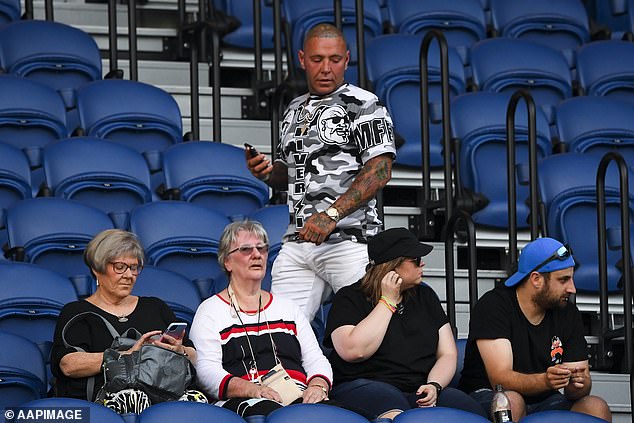 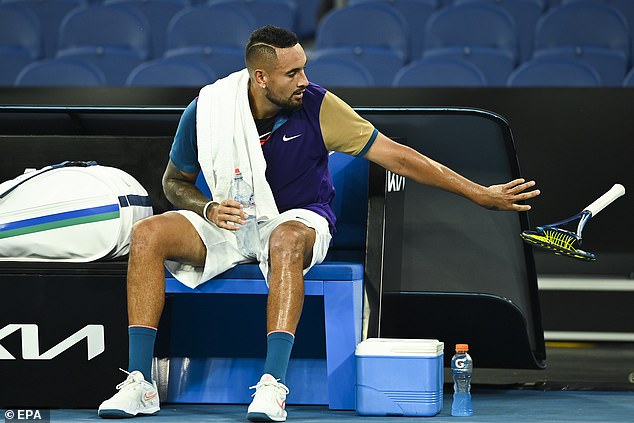 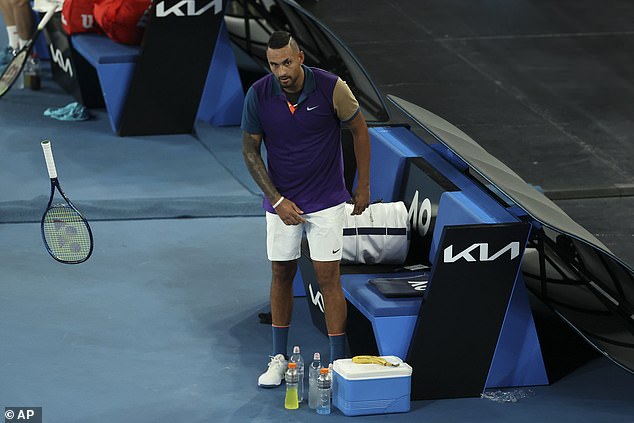 The Serbian chair umpire squared off against Roger Federer during a tense five-set match against American Tennys Sandgren last year.

Veljovic called a code violation on Federer for an ‘audible obscenity’, after a lineswoman heard him let out an ‘R-rated German word.’

A fuming Federer was seen arguing with a calm and collected Veljovic, who ultimately refused to back down on her call.

The umpire was inundated with online praise for standing up to one of the world’s most best tennis player.

Alicia Gowans, the girlfriend of Kyrgios’ brother Christos was back in the players box with the family, two nights after she was ordered out of his box during the early stages of the first round clash. 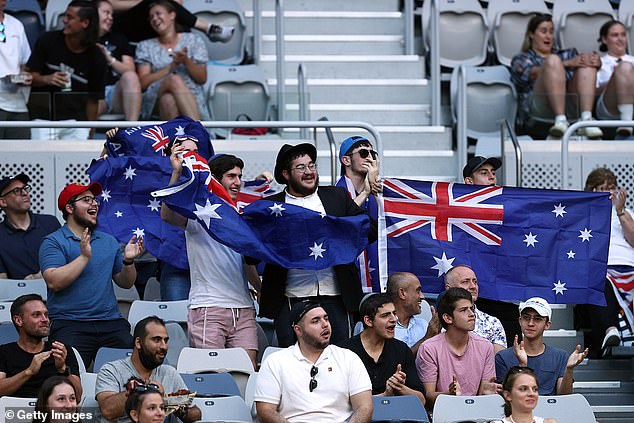