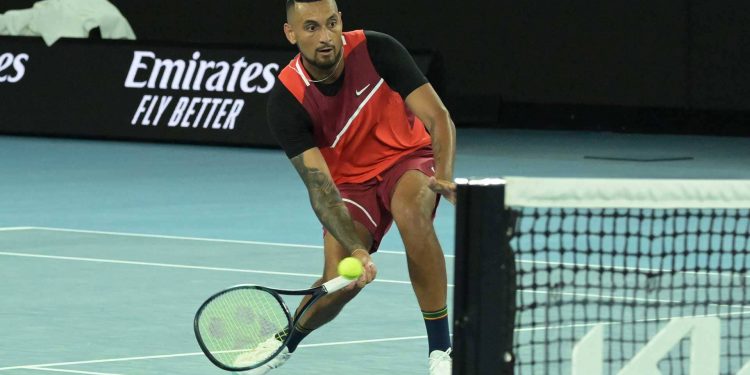 
Nick Kyrgios was all about the positives despite his loss to Daniil Medvedev at the Australian Open on Thursday.

“I’m super proud of my performance today,” said the Australian in his post-match press conference. “From where I was with my struggles the last four, five months, to be feeling like this…I’m just proud of the way I responded.”

Kyrgios went into the match with a 2-0 ATP Head2Head series lead over the World No. 2, but with no meeting since 2019 there was intrigue about how the match-up would play out. The Australian underdog rose to the occasion if front of an excited crowd on Rod Laver Arena, proving a stern test for the second seed before the Russian prevailed 7-6(1), 6-4, 4-6, 6-2.

“I’m going to hold my head high, I gave it everything,” Kyrgios said. “I put on a good performance. I think he’s favoured to win the Australian Open. I can’t be too upset.”

The match was just Kyrgios’ second since representing Team World at the Laver Cup in September, but he prides himself on being able to play at his peak with little preparation.

“No matter how little I train or how much I play, I’ll always lift for matches like this,” Kyrgios said. “I’m not going to shy away from it. Obviously, I’m not happy with drawing Daniil Medvedev [in the] second round because my ranking slipped. If I play 95 per cent of people tonight on that court, I think I win, to be honest with you.

“That’s just the way it is. I’m just proud of the way I carried myself. I fought, I gave a good show, and that’s it. I’m not thinking about my next tournaments or anything like that.”

Kyrgios was particularly pleased with his serving performance, winning 74 per cent of points behind his first delivery. “I threw everything I could at him,” he said. “I thought I served consistently at 220 kmh for three-and-a-half hours almost.”

The Australian, who is next scheduled to play at the Dallas Open in February, is confident he can still compete on the biggest stage, despite currently sitting at No. 115 in the ATP Rankings. “People can doubt me as much as they want,” Kyrgios added. “But they know I’m going to show up for matches like this. That’s why the crowd is the way it is, that’s why the tickets are the way they are, that’s why the views are the way they are. It all speaks for itself.”

After winning his first-round match over Liam Broady on John Cain Arena, Kyrgios admitted the move to Rod Laver Arena for the Medvedev clash was something he had revelled in. “I thought the atmosphere was awesome. That’s what sport is,” the 26-year-old said. “You’ve got the most entertaining player playing in his home slam on Rod Laver.

“I don’t take any moment like that for granted. When I was a young kid that was a court that I remember watching a lot of tennis matches on, and one day I thought I was going to be there entertaining millions of people. It became reality. It was a special moment for me tonight.”