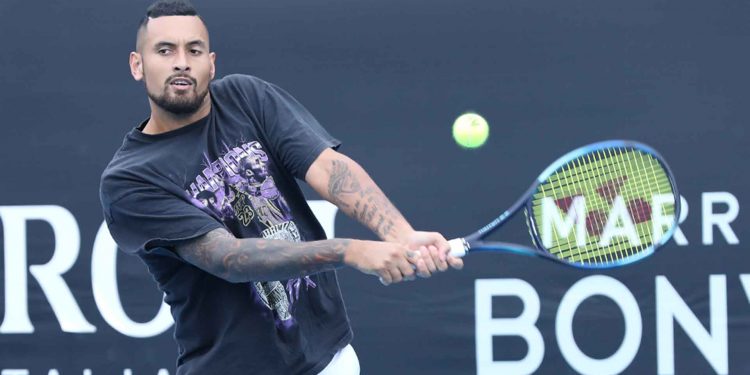 
Nick Kyrgios will challenge Fabio Fognini for the second time next week at the Sydney Tennis Classic.

Nick Kyrgios has been drawn to face fellow shot-maker Fabio Fognini in the first round of the Sydney Tennis Classic, which features Aslan Karatsev and former World No. 1 Andy Murray.

Kyrgios, who has not played an ATP Tour event since the Laver Cup in September 2021, beat Fognini 6-3, 6-3 in March 2018 at the Miami Open presented by Itau. The Australian wild card or seventh seed Fognini could meet fourth-seeded Reilly Opelka in the quarter-finals.

Kyrgios: ‘I Talk A Lot, But I Have Also Beaten A Lot Of Players’

Murray, who also features in the bottom half of the draw on his Sydney debut, is set to face a qualifier in his first match, with a second-round clash against second seed Nikoloz Basilashvili on the horizon. Murray beat Basilashvili 6-4, 6-3, 5-7, 6-3 in the Wimbledon first round last year. Third-seeded Briton Daniel Evans, in the top half, plays Alexei Popyrin or Pedro Martinez in the second round.

Top seed Karatsev, who began his journey up the ATP Rankings as Russia’s secret weapon at the 2021 ATP Cup and went onto reach the Australian Open semi-finals (l. to Djokovic), will play Serbia’s Miomir Kecmanovic or a qualifier in the second round.