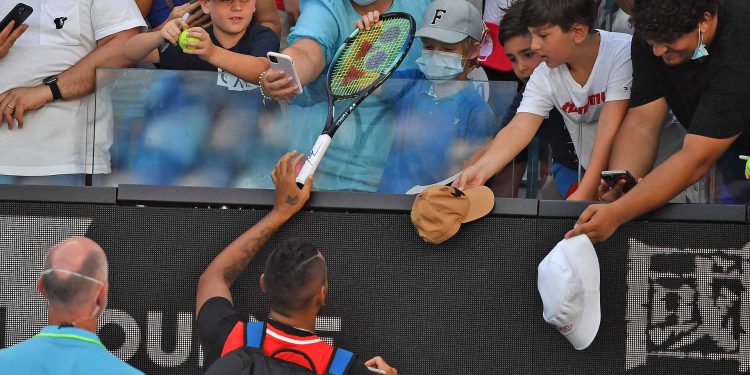 Kyrgios and Thanasi Kokkinakis were playing in the doubles quarter-finals against Tim Puetz and Michael Venus when Kokkinakis hit a first serve that was a let. Although the point was “dead”, Kyrgios reacted to Venus’ return by instinctively swatting a volley away.

The ball bounced into the crowd and struck a young fan. Kyrgios immediately noticed and quickly grabbed a racquet from his bag and handed it to the fan. After the match, during which the home crowd was fully behind the Aussies, the 26-year-old signed the racquet as well.

In their post-match press conference, Kyrgios and Kokkinakis spoke about the importance of the home fans.

“This Australian Open I think with everything the people have gone through, they just are just so happy to see Aussies have success. Demon in the fourth round, us kind of carrying the flag in doubles a little bit,” Kyrgios said. “This Oz Open, honestly, I think for us it’s more about the people. Playing for them is more important than our doubles success.

“We haven’t drawn up any goals of what we want to achieve this year in doubles. I just want to play and give the people of Australia and the Australian Open a show and genuinely try and grow the sport of tennis. That’s why I’m playing. I know Thanasi is just enjoying it. This is the most fun we’ve ever had on the court.”

Kokkinakis, who captured his first ATP Tour title at the Adelaide International 2 with the full support of the Australian fans, agreed.

“The thrill for us is honestly walking out there. This sounds stupid, but we worry about what happens in the match after,” Kokkinakis added. “But it’s just seeing the support we’ve gotten and the crowd go nuts every time we get out there and how much they’re enjoying it, that kind of gets us going and gets us motivated to do better for them, honestly.”

Kokkinakis and Kyrgios will play third seeds Granollers and Zeballos in the semi-finals.