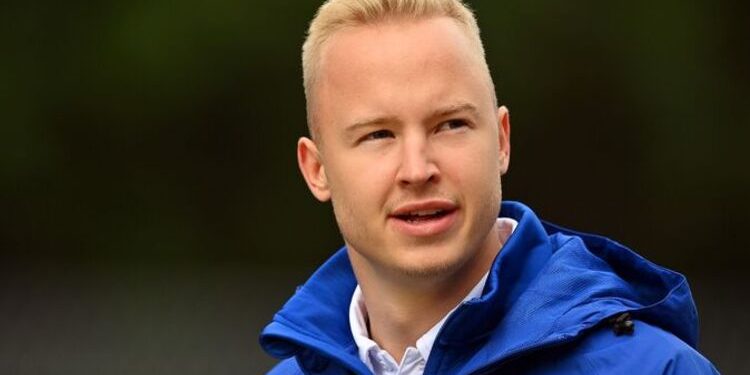 
Nikita Mazepin may be able to keep his place at Haas if he manages to secure a racing licence from another country ahead of the new Formula One season, according to Karun Chandhok. Mazepin’s place on the grid for the upcoming campaign appears to be under threat as a result of Russia’s ongoing invasion of Ukraine, which began upon the orders of Vladimir Putin seven days ago.

There have been plenty of recent questions over the 22-year-old’s continued presence on the grid after a host of Russian athletes and teams from other sports were banned from international competitions earlier this week.

It has already been confirmed by the FIA that a blanket ban on Russian drivers will not be enforced, meaning that Mazepin will not be forced out of Haas by F1’s governing body.

However, it seems as though he could still be dropped by the team after Motorsport UK ruled that all drivers with Russian or Belarusian licences will be banned from competing in UK events until further notice.

Mazepin, who was born in Moscow and currently holds a Russian licence, will not be allowed to race at this year’s British Grand Prix as a result of the move.

He is widely expected to be released from his Haas seat as a result of the current situation, but Chandhok has suggested that he may be able to find a loophole by applying for a new licence from a different country.

“What isn’t very well known is that drivers can apply to other ASNs [national sporting authorities] for their licences as the racing nationality is linked to their licence rather than passport,” tweeted Chandhok.

“Therefore a stronger stand from the FIA would ensure that the drivers also cut ties with Russia & apply elsewhere.”

It remains to be seen whether Haas will eventually decide to cut ties with Mazepin, who joined the team at the start of last season.

Reserve driver Pietro Fittipaldi would be set to emerge as the first-choice option to replace the Russian if he is relieved of his duties over the coming days.

It seems likely that Mazepin will leave Haas if they opt to cancel their commercial agreement with Russian potash firm and title sponsor Uralkali in light of recent events in Ukraine.

The company is part-owned by his father, Dmitry, who funds his son’s F1 seat and was reportedly called into a Kremlin meeting with Putin to discuss financial sanctions against Russia last week.

Haas team principal Guenther Steiner has already confirmed that discussions will be held over Mazepin’s future and the fate of their deal with Uralkali over the coming days.

“It needs to be resolved,” he said last week.

“Not everything depends from us here what is happening. There’s governments involved, I have no power over them, and we also need to see how the situation develops in Ukraine.”

Steiner went on to confirm that Haas’ existence would not be under threat if they ultimately decide to part ways with Uralkali in spite of the lucrative nature of their current agreement.

“It is a headache but it’s not something which disturbs the team on the competition side,” he added.

“Financially, we are OK. It has no implication on the team, how we are running it, or how we plan the season.

“There are more ways to get the funding, so there is no issue with that one.”