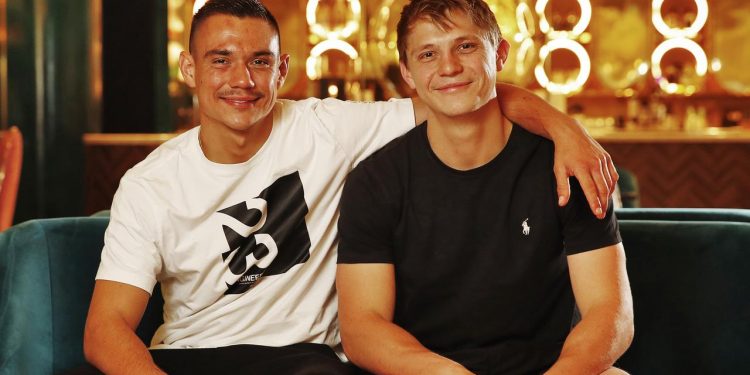 
If Tim Tszyu is a ‘surgeon’ in the boxing ring, his younger brother is a ‘butcher’. That’s what Nikita Tszyu declared on Wednesday as he announced his long-awaited professional boxing debut.

Following in the footsteps of his iconic father Kostya and older brother Tim, 24-year-old Nikita will end a five-year exile from the sport when he takes to the ring against undefeated Aaron Stahl on Wednesday March 2.

“Some people used to describe my brother as a surgeon,” he added. “They described me as a butcher. We do the same job but in a different way – I’m a little bit more messy.”

And Tszyu 3.0 is coming back to the ring ‘with bad intentions’ and ready to ‘make a statement’, his manager Glen Jennings has declared.

Jennings, who also managed Kostya and oversaw the start of Tim’s career, declared on Wednesday: “Nikita comes to the ring on March 2nd with bad intentions. He’s been out of the game for a long time. I can guarantee you one thing, when Nikita dedicates himself to something, and he did with his university degree … don’t blink. Don’t get out of your seat. Don’t go anywhere.

“Nikita’s coming back to boxing to make a statement. And it’s going to be an exciting ride. Together with Tim, it’s a wonderful platform here at the Brisbane Convention Centre to launch the next phase of the Tszyu legacy in Australian boxing.”

Tszyu was a four-time national champion at the amateur level before giving up the sport for five years to complete an architecture degree. Now, he starts from the bottom at the same 68.85kg weight – light middleweight or super welterweight – as his older brother.

The 24-year-old southpaw will face the unbeaten Aaron Stahl (2-0-1) at the Brisbane Convention and Exhibition Centre on Wednesday March 2.

And in a remarkable boon for Australian boxing fans, the stacked No Limit Boxing card will not be a pay-per-view, but instead will be live on Fox Sports and Kayo.

Like Tim, Nikita, 24, grew up training in the Rockdale gym that Kostya made home. But the similarities between the pair’s style end there – with Nikita a vastly more explosive character in the ring compared to his brother.

His promoter George Rose of No Limit Boxing declared: “He’s a lot different. I think the way he moves and the type of person he is, he’s a lot different to Tim … He’ll be a really exciting person to watch in 2022 and beyond.”

Rose added: “I love talking to everyone else and you hear what everyone says about Nikita. Everyone’s excited to see Nikita in the ring … He’s ready to fly the flag (of the Tszyu name) as well.”

The undefeated Stahl is a dangerous prospect, let alone for a debutant. But remarkably, such is Tszyu’s reputation that a raft of potential opponents rejected the opportunity to enter the ring with him.

Tszyu’s promoters reportedly asked over a dozen potential opponents to face the dangerous slugger before Townsville’s Stahl signed on the dotted line.

Rose said that Nikita turning professional: “sent a whole lot of fear through the superwelterweight division … There’s a whole lot of people who aren’t willing to step into the ring with Nikita Tszyu, which says a lot about him.”

HOW TIM PUSHED NIKITA TO RETURN

“In Tim’s fight against Dennis Hogan, I got to go into the ring,” Nikita told News Corp late last year.

“That feeling of being on the mat, seeing everyone cheering around, that was one of the main deciding moments that made me want to go back into the sport.

“It was motivating. Seeing my brother there, seeing that beautiful victory – I was training with him beforehand, so I got to see the process.

“Yes, Tim is one of the main motivations for me to come back.”

Also on Tszyu’s huge maiden card, Wade Ryan will fight Dennis Hogan in world title eliminator, Joe Noynay and Australian rising star Liam Wilson face off again in a rematch of their fascinating bout in July, and Stevie Spark and River Diaz will do battle.

Irishman Hogan is a multiple former world title challenger, with his fight with Australian Ryan set to decide who will face off for a IBO world title bout.

“I’m delighted to be getting this title eliminator,” Hogan said, having fought back from injuries and a slip in form to get his name back into the world title conversation.

World-ranked Filipino Noynay handed Wilson the first defeat of his professional career on the undercard of Tszyu vs Spark, but Wilson said a rematch was “the only fight” he wanted despite plenty of other opportunities.

As for Spark, he will return to his natural weight after his bold late-notice bout with Tszyu.