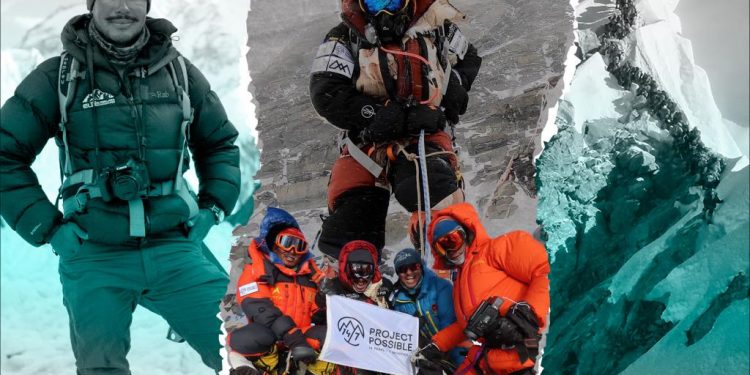 
In 2019, Nims Purja, a 38-year-old veteran of the British special forces, set out to climb all 14 of the world’s highest mountains — those over 8,000 meters, an altitude known as the “death zone” — in seven months, smashing the previous record of nearly eight years.

The feat was detailed in a Netflix documentary, “14 Peaks: Nothing Is Impossible,” released in late 2021 and in a book, “Beyond Possible: One Man, Fourteen Peaks, and the Mountaineering Achievement of a Lifetime” (National Geographic), out now.

“There were moments when the . . .  mission felt overwhelming,” Purja writes. “Sometimes I even prayed for death.”

At one point, Purja nearly did die. Descending Pakistan’s Nanga Parbat, he slipped, fell, and slid 100 meters before managing to grab a rope. Climbing Kanchenjunga in Nepal, Purja and his team had encounters with three men who perished on the mountain. Still, the experience only left him looking for new challenges.

This year, Purja is busy guiding expeditions and performing cleanup missions on Everest and K2. He was just in Antarctica leading climbers up the continent’s tallest peak, Vinson Massif, with an altitude of 16,050 feet (4,892 meters) and then in South America summiting that continent’s highest mountain, Aconcagua. One of the people he was guiding in Antarctica was the princess of Qatar, Sheikha Asma Al Thani.

“She’s probably one of the strongest of any — I wouldn’t say client any more, because she’s like a climbing buddy — that I ever had,” he said of Asma.

Here, he reveals the biggest struggles he faced on each of the 14 mountains he climbed for Project Possible in 2019…

Purja started his endeavor, which he dubbed Project Possible, with this challenging climb — “the most dangerous mountain ever,” he said. Prone to avalanches and unseen crevices into which people can fall to their death, Annapurna is a “a war zone,” Purja writes. For every three people who reach the top of the peak, one dies.

On his way up, a large mass fell away from the mountain’s north face. Purja and his team sought shelter in a tent and survived the avalanche. Shortly after summiting and setting up camp for the night, they were awakened by a frantic sherpa who had to leave his client, a 48-year-old Malaysian doctor, on the mountain. Purja and his crew agreed to help rescue the man, who was eventually evacuated by helicopter.

The rescue mission on Annapurna led Purja to get a late start on his second climb and miss the window for good weather. He had to contend with 70 kmph (43 mph) gusts and the harsh conditions meant it took him and his team five day to summit. “The winds were so powerful that, at times, it was impossible to see,” he writes. Purja recalled similarly challenging conditions when he first climbed the mountain in 2014 and led an expedition with the Princess of Qatar. “I’ve never had an easy way on this mountain, it always tests me,” he said.

The third tallest mountain in the world has a uniquely long section right before the summit. It was the hardest climb of the project, Purja said, recalling how he was hungover; the summit push alone took over 18 hours; and how he and his team attempted to rescue four other climbers, sharing their oxygen in the process. “Psychologically, the route feels neverending, the summit forever out of reach, and many people turn back long before making the top,” Purja writes. Of the climbers they attempted to rescue, two perished. One man died in Purja’s arms. They also learned that a third man, whom they passed and tried to convince to turn around, died.

On the world’s tallest mountain, he contended with a high-altitude traffic jam. Roughly 150 climbers were congested on the Hillary Step, a steep rock face just a few hundred feet from the summit. “Collisions were taking place every couple of minutes: a succession of frantic overtaking maneuvers threatened to wobble someone from the safety rope at any moment,” writes Purja, who snapped a photograph of the congestion that went viral and ended up on the front page of the New York Times.

“Ohmygod, I love this mountain,” Purja said of this relatively easy peak. “I felt like I was on a holiday.” It took him and his team just 10 hours and 15 minutes to reach the top, tying his previous record. Still, the mountain is very much a potentially lethal one. “I passed at least three corpses along the way [down]the most unsettling being a man in a bright yellow summit suit, his jaw set askew in a rictus grin,” Purja writes. “Apparently, he’d been stuck there for years.”

This climb was relatively easy, taking just 18 hours. “The lines had been fixed, the snow was shallow, and we moved fast and light,” Purja writes. With the summit, he set a record for the fastest triple-header of Everest, Lhotse, and Makalu: two days and 30 minutes. He held the previous record for the feat, which was five days, three hours and 25 minutes. “Could anybody doubt me now?” he writes.

The second phase of Project Impossible was tackling five mountains in Pakistan, where, Purja writes “an attack from Taliban forces was a real concern.” He booked three different flights into Pakistan to confuse potential terrorists and kept a low profile, refraining from posting to social media. In 2013, 16 members of the Taliban ripped a dozen climbers from their tents at Nanga Parbat base camp and executed all but one man who managed to escape in the dark on bare feet.

While in Nepal, Purja was often able to hitch a ride on helicopters between the base camps of different mountains, but there were no such luxuries in Pakistan. It took eight days of travel, by car and by foot, carrying heavy backpacks, through Taliban territory to get from Nanga Parbat to Gasherbrum basecamp. Exhausted, Purja and his team didn’t realize how long it would take them to climb the actual mountain and didn’t bring adequate food or supplies to camp. “We massively underestimated it,” he said.

Ater a rough go on the first Gasherbrum, Purja and team were able to relax a bit. “It’s an easy mountain,” he said. They climbed at a slow, steady pace and enjoyed views of K2 and Broad Peak, along with the mountain’s own unique silhouette. The “sharp peak, curved toward the sky like a shark’s tooth, glowed pink in the sunrise,” he writes.

When Purja and his team arrived at base camp for K2, the second highest peak in the world, morale was low. There had been “hair-trigger avalanches and screaming gales,” he writes. Purja decided his team would find a way up the mountain despite the unfavorable conditions using a route known as “the Bottleneck” that “bristled with seracs and was pitched at around 55 degrees.” It was the fastest approach, but also a number of fatalities occurred there. “I knew the seracs were hanging over us like a toothy jawline,” he writes. “It required only to crack and crash for all of us to die.”

After coming down from K2, the team rested only three hours at base camp before heading to the twelfth highest mountain in the world. They planned to tackle Broad Peak in a day,  “but the mountain god has other plans.” There’d been a heavy snowfall burying all the fixed lines and leaving them to trailblaze in deep snow. The typically unstoppable Purja confronted his physical limits; the team ran out of supplementary oxygen and became a bit delirious. At one point, Purja realized that he’s been climbing for several hours without being clipped into a fixed line — “a critical priority for high-altitude safety.”

The final phase of Project Possible was marked by bureaucratic hurdles. The Chinese government planned to evacuate this mountain by October 1, Purja had to travel quickly by helicopter and foot to Cho Oyu.  While at base camp at that mountain, he heard rumors about others in the climbing community being jealous of his pursuits. If rival guides wanted to push him off a remote peak, he writes “what was to stop them from saying [I’d] slipped and fallen? The alibi was perfectly plausible.”

Purja couldn’t stop thinking about his dying mother as he tackled this challenging Nepalese peak, considered one of the world’s most dangerous. “I began to feel a little overwhelmed. I was so close to finishing the mission, but at the same time everything seemed off-kilter,” he writes. “I was weighed down by the realities of mum’s health…. And what about the financial implications of my career choices — no immediate pension, no security?”

Purja was initially denied permission by the Chinese government to climb this final peak, which is located in Tibet. He was eventually able to get a sherpa friend to convince them to let him do it, but then, “The weather on the way up was horrific, as if the mountain hoped to deny me the final climb,” he writes. “But nothing could hold me back, though an avalanche came damn close.” A slab of snow sheared off from the mountain and rushed towards him, but the avalanche went around him. “The deities had spared my life,” he said.

The U.S. has a big stake in how the Ukraine war ends; it’s likely to be paying a lot of the cost