Nine-year-old girl is ‘stabbed to death’ in Boston, Lincolnshire 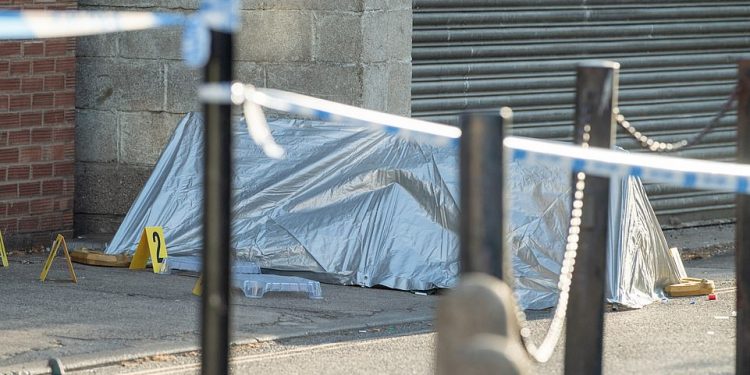 
Police have launched a murder investigation after a girl aged nine was stabbed to death on a street in Lincolnshire in one of the most horrifying examples yet of Britain’s spiralling knife crime crisis.

The child was found on a quiet lane in Boston at around 6.20pm yesterday – with locals left in ‘profound shock’ and the local MP appealing for national assistance to catch the killer.

No arrests have yet been made. Today, a small tent was pictured at the murder scene near the town’s historic St Botolph’s Church as forensic officers bagged up evidence.

A large object appeared to be covered in the middle of the alleyway, which was marked by small yellow signs.

The UK is in the grip of a knife crime epidemic, with the latest figures for England and Wales showing offences involving knives are up by 10 per cent compared to the previous year.

This weekend saw a wave of stabbings in London that saw three people killed in less than 24 hours and another badly injured.

Horrifically, this is not the first time children have become victims of fatal stabbings in Britain, with 12-year-old murdered by a teenager Ava White in Liverpool last November. He was sentenced to a minimum of 13 years in jail. 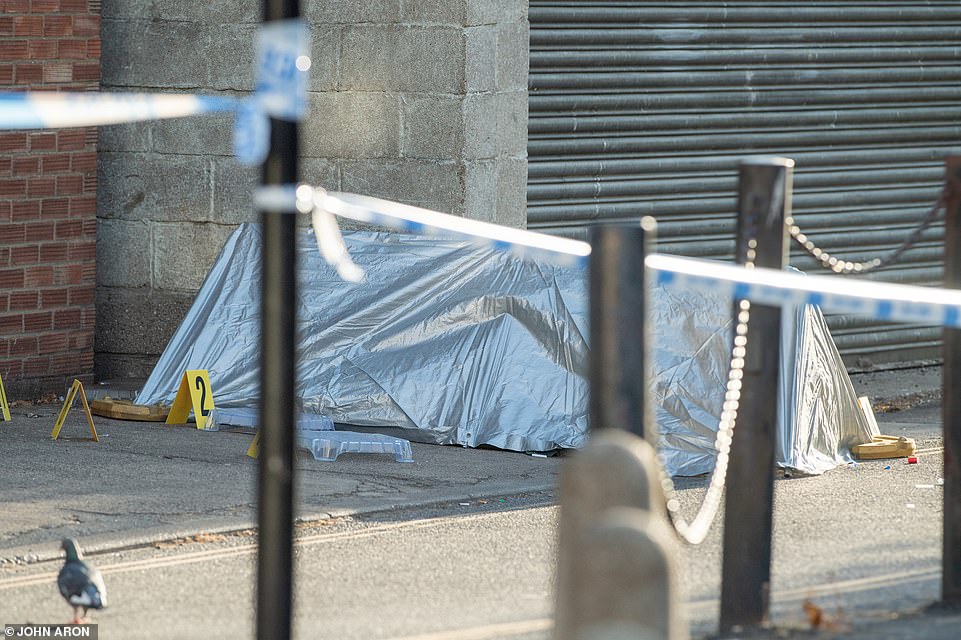 Emergency services rushed to the scene in Boston, Lincolnshire, at around 6.20pm on Thursday evening to reports a nine-year-old girl had been fatally stabbed (Pictured: Scene of horror killing on Friday morning) 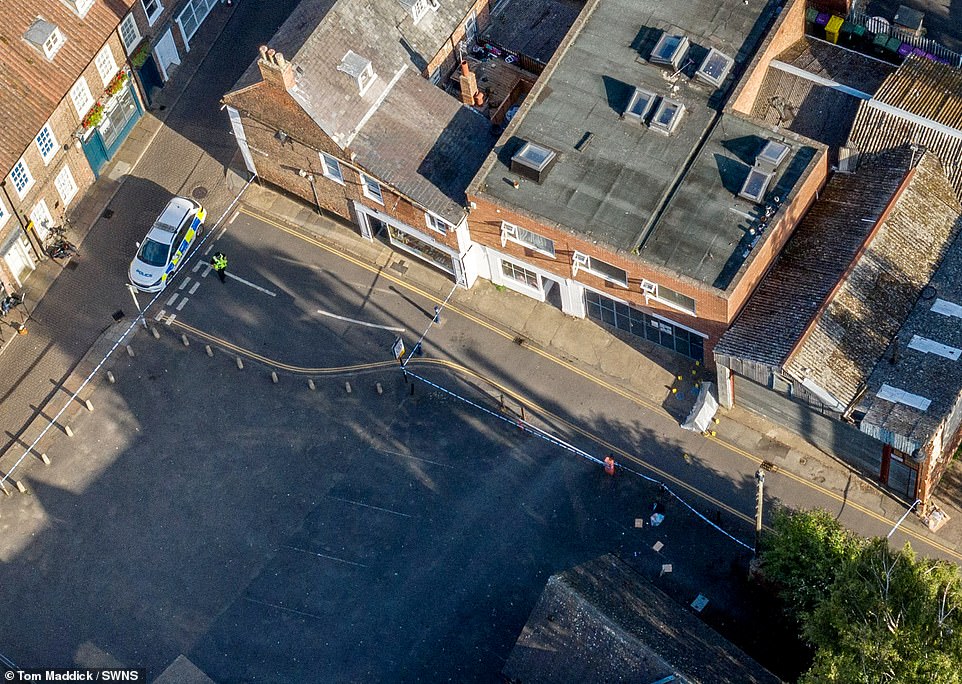 An aerial view showing police at the scene of the stabbing in Boston, with a forensic tent seen behind a cordon 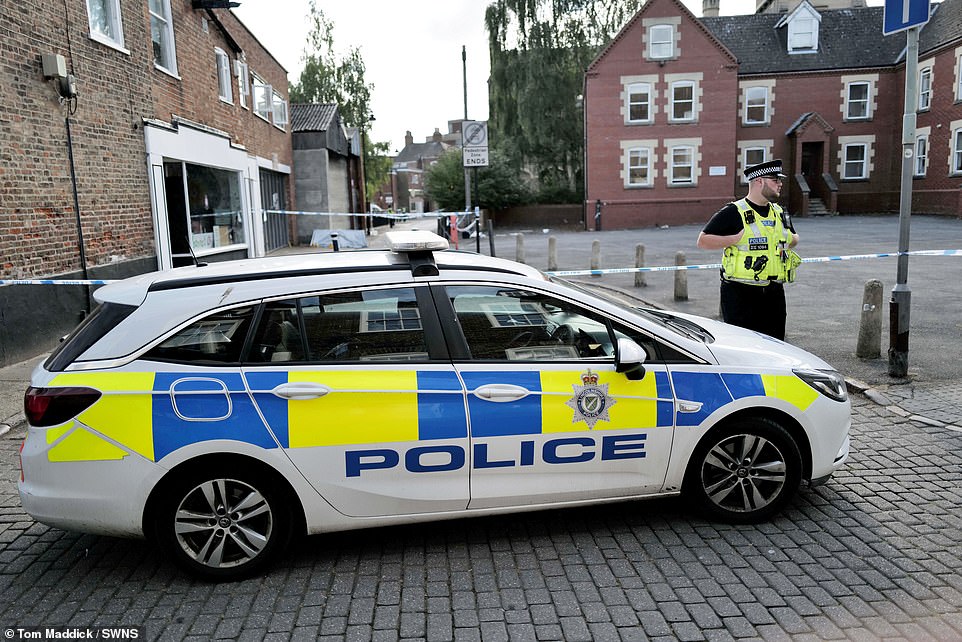 The UK is in the grip of a knife crime epidemic, with the latest figures for England and Wales showing offences involving knives are up by 10 per cent compared to the previous year 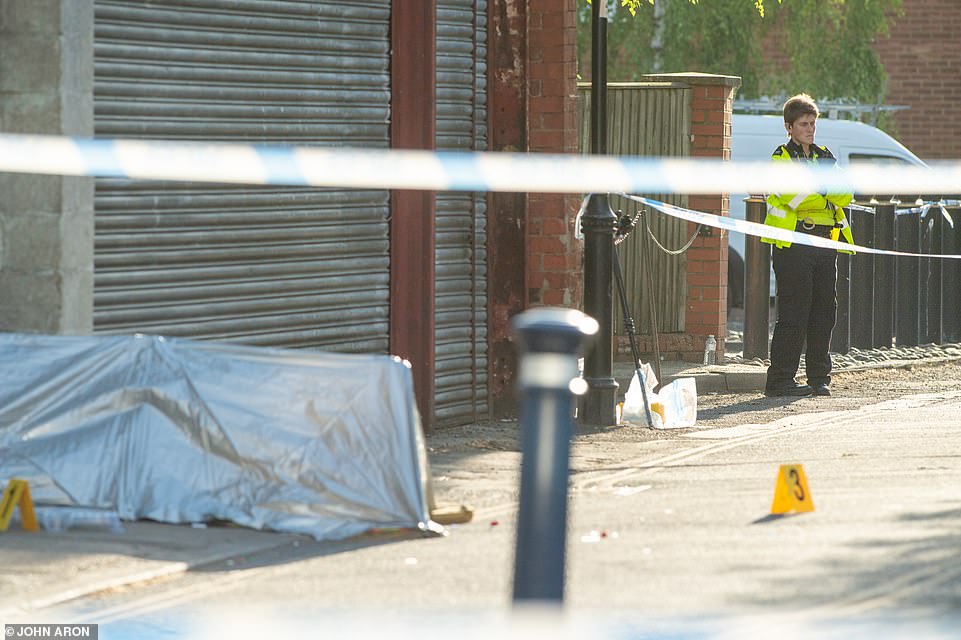 Police on Friday morning patrol the scene of the shocking fatal stabbing of a nine-year-old girl in Boston, Lincolnshire, as they launch a murder inquiry 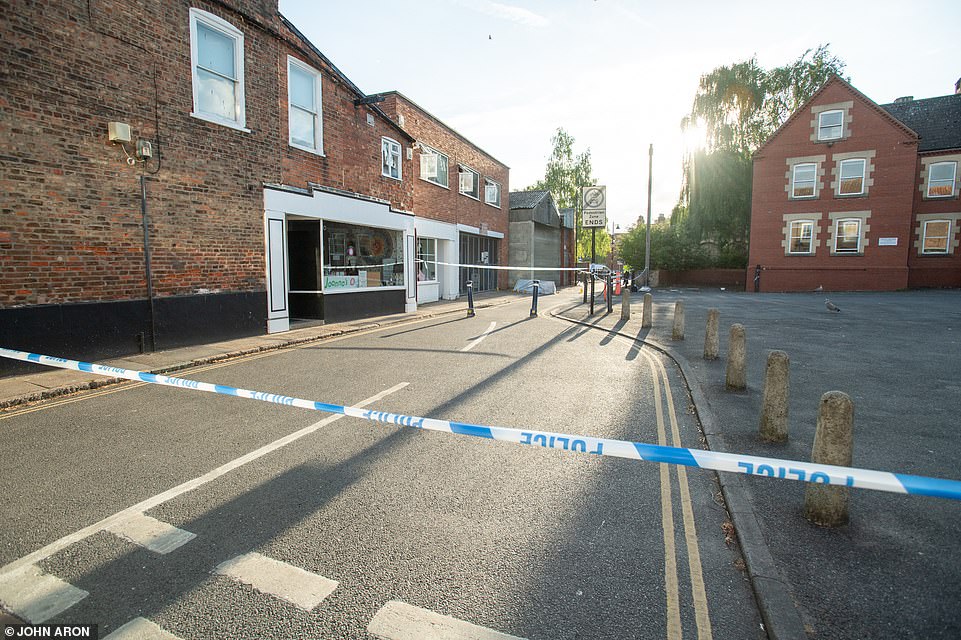 Fountain Lane, the scene of the killing, remained cordoned off by police tape on Friday morning

Much of the nearby area is commercial, with car parks, a high street and several boarded-up shops, but the street also runs alongside the end of a residential road.

The local community was in a state of shock as they came to terms with the tragic news late on yesterday evening.

The Tory MP for Boston and Skegness, Matt Warman, said he had been in contact with the policing minister to ensure national assistance is available to the murder investigation.

‘Profoundly shocking news in Boston this evening,’ he said. ‘I have spoken to senior officers locally and am hugely grateful for all the emergency services’ work.’

Many spoke of their shock and fear at a suspected murder happening so close to home, while one resident was left to openly ask if the area remain safe for her children.

Another, posting on Facebook, commented: ‘How many more of our children have to die before serious intervention takes place in this town?

‘Why aren’t the government and the councils doing more to make Boston a safe place to live when these diabolical news stories are far too frequent. This is a tragedy.’

A third added: ‘This is absolutely devastating and traumatic to read. Rest in peace little one, my thoughts go to all family and friends and thoughts to the officers involved as well as residents of Boston.

‘How can we sleep at night knowing a 9 year old child has been murdered? Absolutely awful.’ 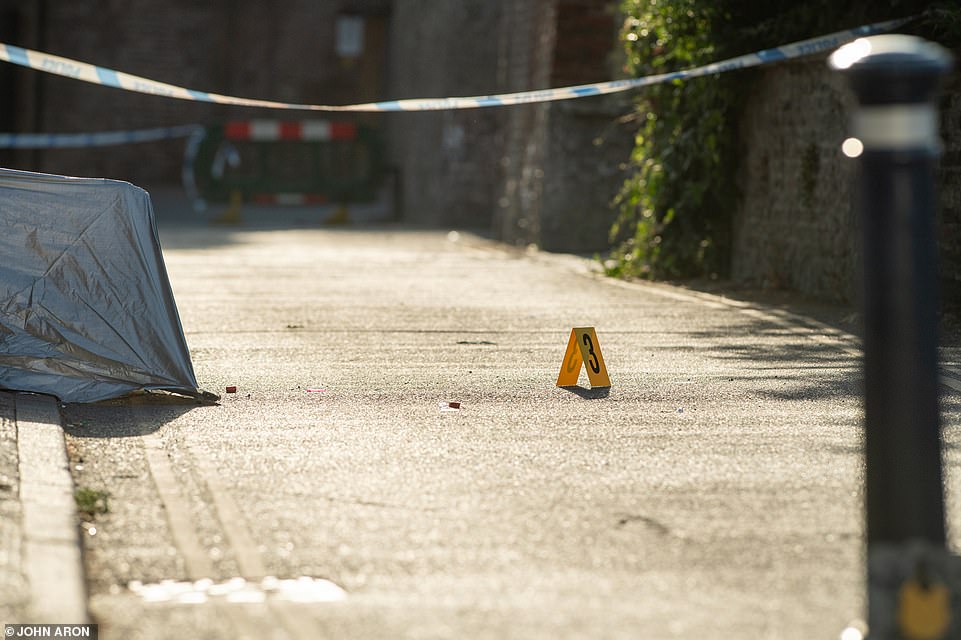 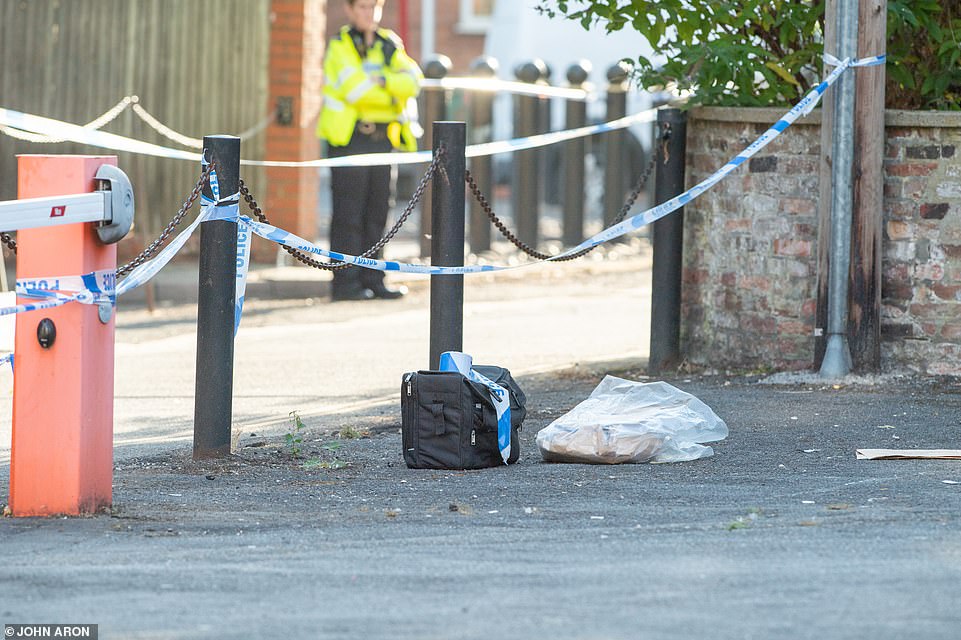 Home Office figures from 2016 found the port town of Boston, a sleepy market town in Lincolnshire, was the murder capital of England and Wales (Pictured: Scene on Fountain Lane) 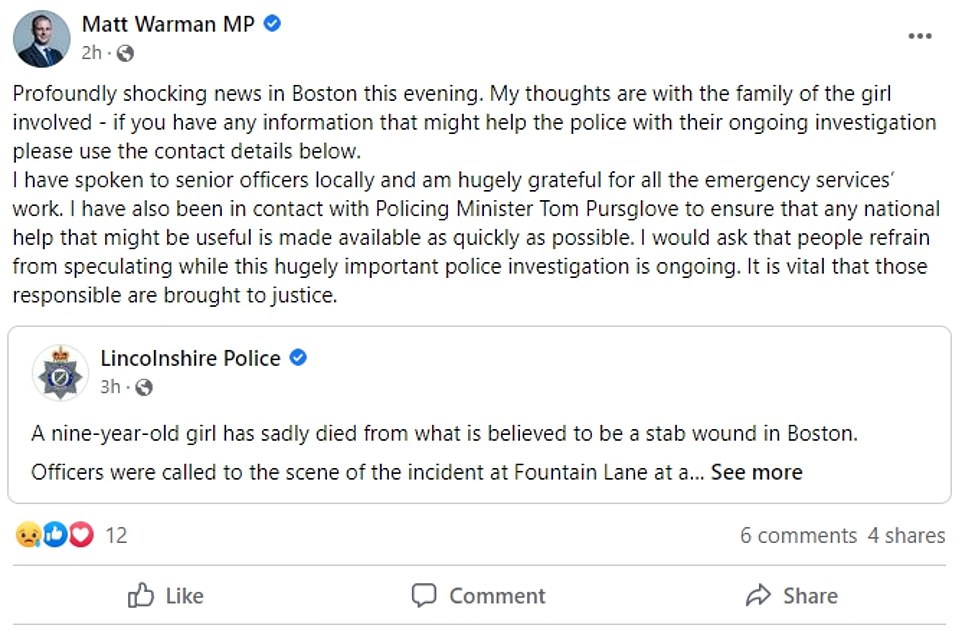 Mr Warman said in a statement posted on Twitter: ‘Profoundly shocking news in Boston this evening, I have spoken to senior officers locally and am hugely grateful for all the emergency services’ work. I have also been in contact with Policing Minister Tom Pursglove to ensure that any national help that might be useful is made available as quickly as possible’

Home Office figures from 2016 found the port town of Boston, a sleepy market town in Lincolnshire, was the murder capital of England and Wales.

Boston came top of a list of the local authorities with the most cases of murder, attempted murder or conspiracy to commit murder per 100,000 people.

There was a rate of 15 murderous crimes per 100,000 people up to September 2015 – ranking as the highest per person average in England and Wales and rivalling huge cities such as Birmingham or London.

And the overall crime rate in the port town for 2021 was recorded as 100 crimes per 1,000 people, making it among the most dangerous towns in Lincolnshire. 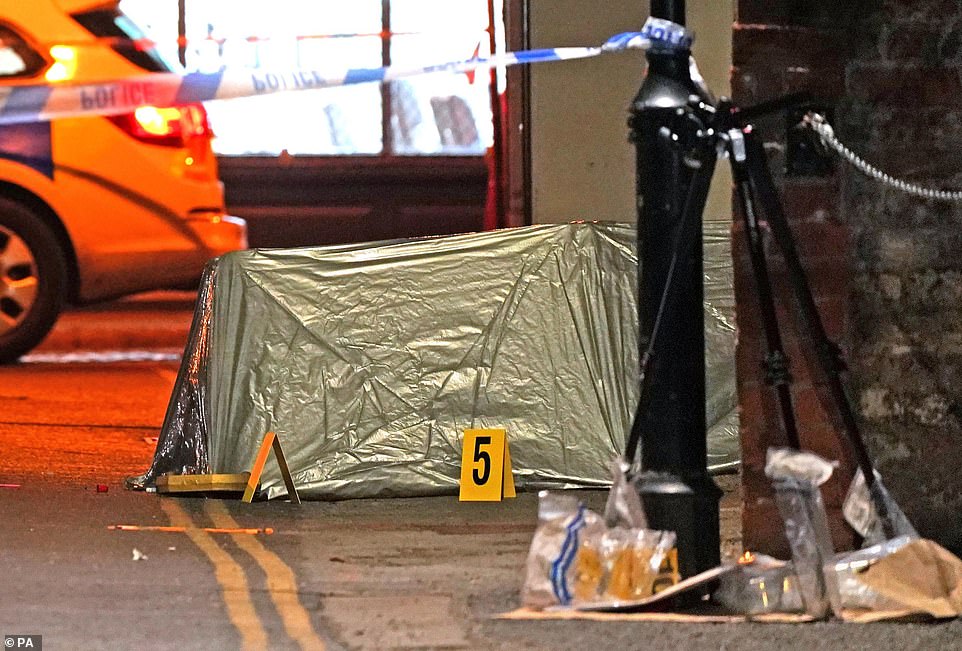 A nine-year-old girl has died from a suspected stab wound in Lincolnshire. Pictured: Forensic analysts mark out the crime scene 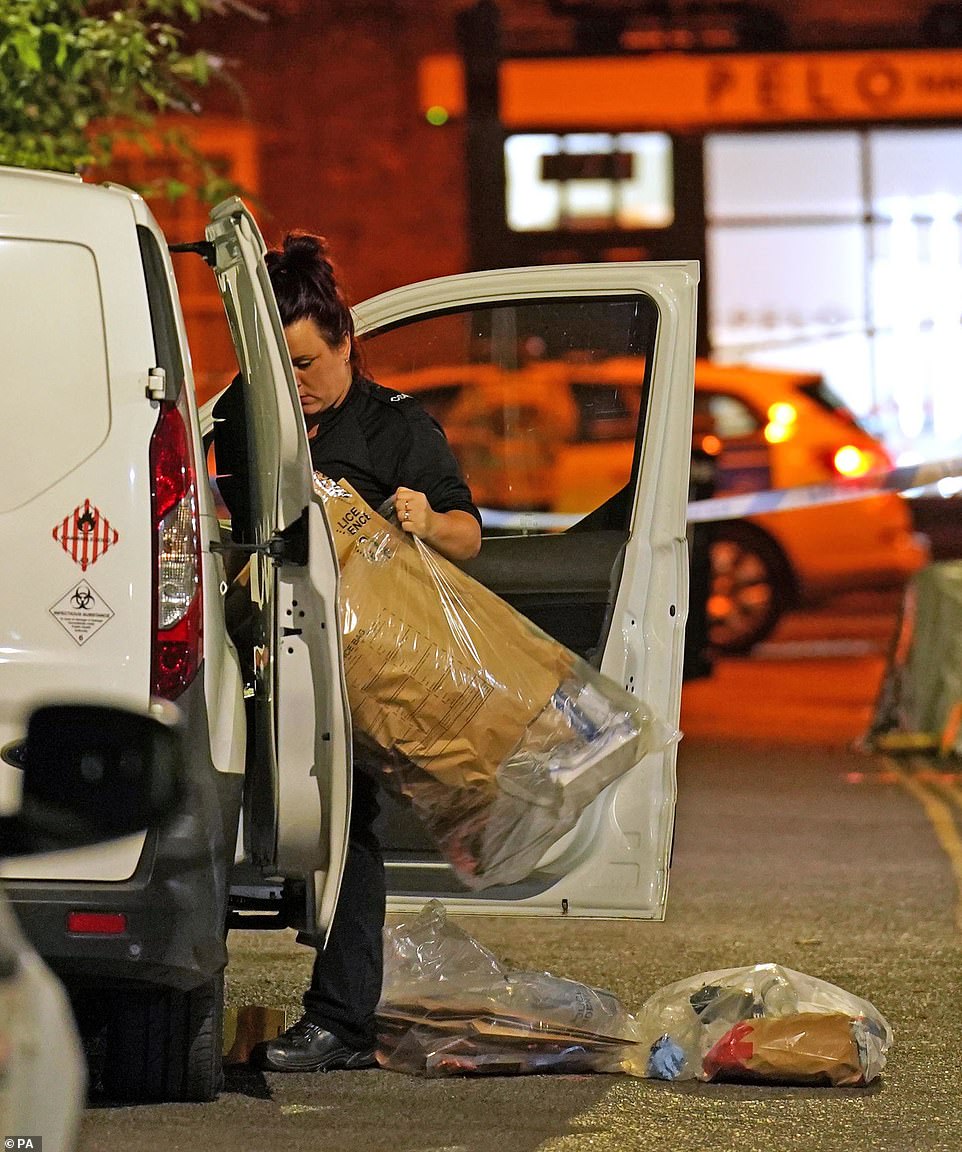 A police officer collects bags of evidence after a girl, aged nine, died from a suspected stab wound in Boston

Lincolnshire Police added in a statement: ‘The young girl’s parents have been informed and our thoughts are with them at this incredibly difficult time.

‘Her family will be supported by specialist trained officers.

Do you know more about the incident? Email tips@dailymail.com 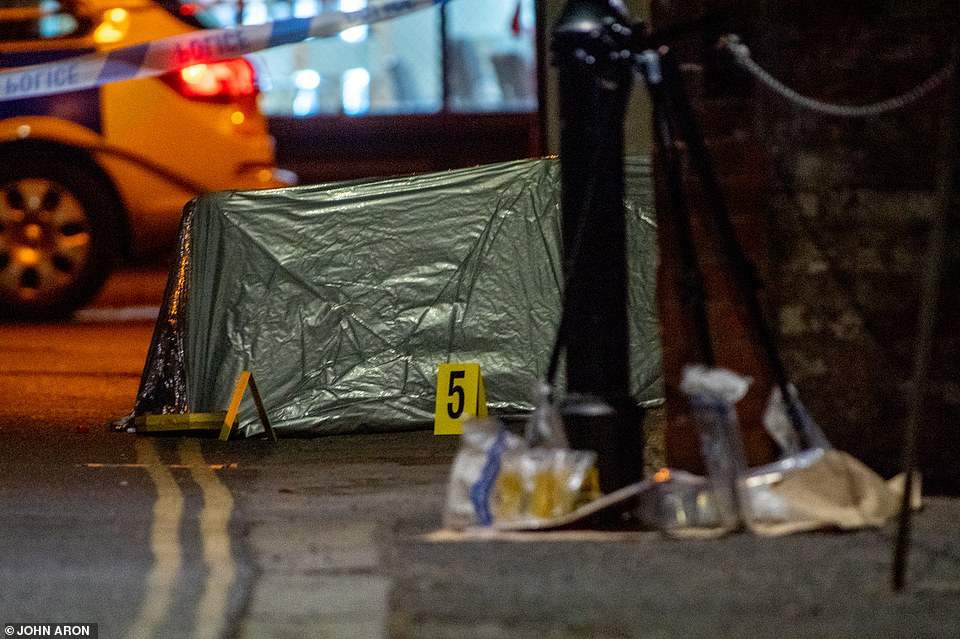 A large object appeared to be covered in the middle of the alleyway, which was marked by small yellow signs as officers gathered evidence 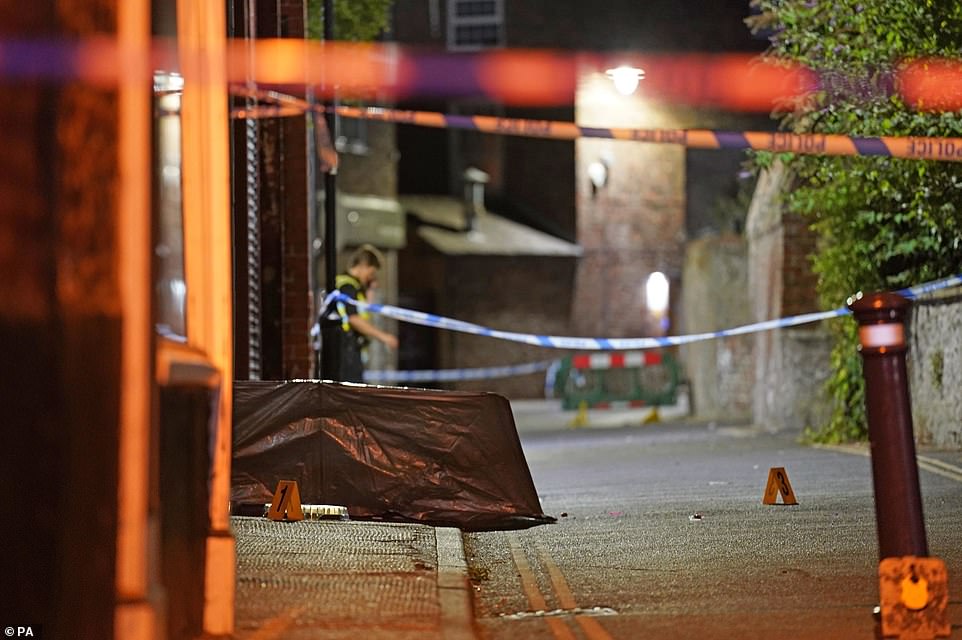