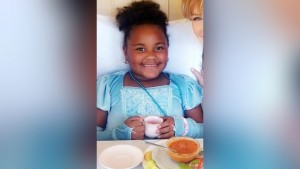 (CNN) — Doctors in Houston placed a 9-year-old girl in a medically induced coma after she was shot in the head during an apparent road rage incident, the girl’s grandmother told CNN on Thursday.

Ashanti Grant is fighting for her life at the hospital, her family said. Surgeons removed one bullet from her head, grandmother Elaine Williams said. Ashanti’s condition, Williams said, is considered “serious.”

“I feel angry that this happened [and] sad,” Williams said. “But I’m hopeful and I have faith.”

The incident took place Tuesday night shortly after 9 p.m. when Ashanti, her mother, father and 11-year-old brother were on their way to the grocery store, Williams said.

A GMC Denali pickup truck cut off the family’s vehicle several times on the northbound lanes of the Southwest Freeway in southwest Houston, according to a Houston police news release.

“The suspect driver got behind the family’s vehicle and someone inside the Denali fired shots toward the vehicle, striking the victim,” the release said.

Ashanti was the only one injured, Williams said.

There is a $30,000 reward for information leading to the arrest of the suspects.

The family has set up a GoFundme page, with a $100,000 goal, to help cover medical expenses. As of Thursday evening, more than $7,700 had been donated.

Ashanti was one of three children shot in the Houston area within the last week. An 11-year-old boy was fatally shot February 3 outside a Harris County apartment complex, according to the Harris County Sheriff’s Office. Then just hours before Ashanti’s shooting, a 13-year-old boy was shot multiple times and is in stable condition, Houston police said in a news release.

“Since the beginning of the year, our city has felt anything but safe,” Mayor Sylvester Turner said. Homicides in Houston increased by 18.27% in 2021, compared to 2020, according to data released by police last week.

“Unfortunately, the increase in homicides during the first month of 2022, including assaults on police officers and citizens is a sobering reminder that we must collectively strive for excellence as a community to combat our increasing crime challenges,” Turner said.