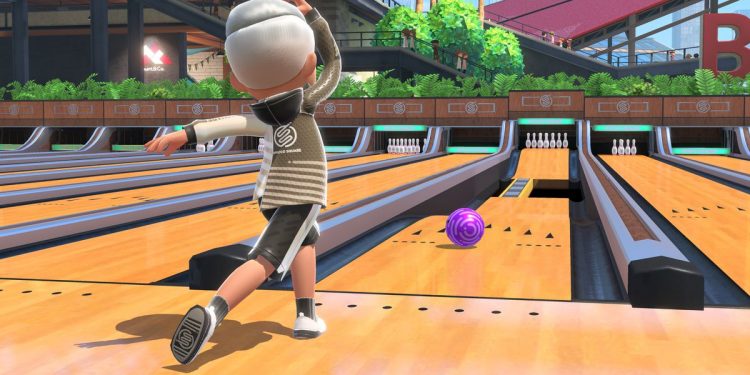 
Nintendo Switch Sportsthe follow-up to the wildly popular Wii Sports and Wii Sports Resort announced in February, is more imaginative than its boring name might imply. While those Wii titles served as tech demos, of sorts, for Nintendo’s at-the-time new motion controls and Mii characters, Switch Sports feels more like a full game, with more involved controls, better visuals, and a post-launch plan for online modes and in-game cosmetics.

Each mini-game looks gorgeous, with detailed venues and more expressive avatars to play as (for those who are curious, you can still use the older Miis on your console, if you really want to get into that Wii Sports mindset). I got to play each of Nintendo Switch Sports six mini-games during my hour-long hands-on: bowling, soccer, badminton, tennis, volleyball, and chambara sword dueling (golf will arrive later in 2022 in a free update).

There are several modes and multiplayer options for each mini-game, whether you intend to play with people on the couch or online with a Nintendo Switch Online account. Bowling — a favorite mini-game among many — has received some welcome updates. If you’re playing with people locally or online, multiple people can bowl simultaneously to speed things up instead of going one by one. There’s also a new online mode that’s effectively a battle royale bowling mode, where you’ll be knocked out if you don’t keep your score high enough.

All of the sports require you to swing a Joy-Con to correspond with the gesture you’d make in the real-life sport. Soccer is the exception, for now at least — I’ll get to that in a second. The game works with Joy-Con to handle kicking, diving, sprinting, and running around. It actually plays like a full third-person soccer game, complete with a radial stamina bar, similar to the one in The Legend of Zelda: Breath of the Wild. An update coming later this year will add support for the Joy-Con leg strap, allowing you to kick to shoot the ball.

There’s a $39.99 physical version of the game that will include the leg strap, while the company will sell the accessory separately for $9.99 for those who may want to pick up a $29.99 digital copy.

Cosmetics are new for Nintendo Switch Sportsand it’s the angle that the company is using to reward returning players. It’ll roll out weekly cosmetic drops that you can get only that week, and only by playing online. Some cosmetics can be worn throughout the game, while others are limited by sport (unique sword designs, new soccer balls, and goal animations, to name a few, are attainable).

For people who don’t yet have a subscription to Switch Online, this might be the most alluring reason to subscribe yet. If you’re offline, the game will give you just a couple of complimentary cosmetic items as a taste of what’s hiding behind the paywall.

All of the mini-games capture what made the original titles into mainstay party games. The controls are approachable (and still surprisingly punishing if your timing is off), and both new and returning sports feel frantic and fun to play.

With anticipated titles on the horizon, like the sequel to The Legend of Zelda: Breath of the Wild, Splatoon 3and more, Switch Sports stands out as a release that taps into a different yet similarly successful time for the company. As it turns out, it’s still a blast to play the one-off game that relies purely on motion controls instead of core controller-based gameplay. There’s still no company better at making these kinds of games than Nintendo.