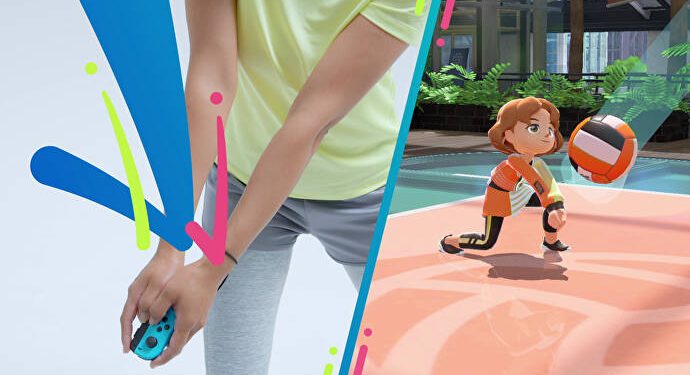 
Let’s not mince words. Wii Sports is one of the best and most important games of all time. Sure, over time it became a poster-child for ‘waggle’, a breed of motion control where it often feels like your movements don’t really matter as long as you’re giving the controller a shake – but for a few years there, back in the mid-2000s, this was the little game that could.

Moreover, it ruled. There was a reason people were over-excitedly flinging their controllers through their expensive new 720 flat-screen TVs with such frequency that Nintendo had to invent dumb little flak jackets for the Wii Remote – it was engaging. People were getting so into it that they’d move their body way more than they needed to, and then a slight loosening of grip, and… whoops!

A fatigue quickly built up, though. There was a real cavalcade of rubbish that aimed to scoop that massive Wii Sports audience; so we got guff like Wii Play and Wii Party, 2K’s Carnival games, and loads else besides. Then the actual follow-up, Wii Sports Resort, pulled a classic Nintendo move and required a stupid, expensive accessory to play. That killed that game for me; Wii Sports was best multiplayer, and there was no way I was buying four of those things. A detour on the Wii U is forgotten, as the Wii U itself is.

But time has passed. These missteps feel far in the rear-view mirror, and I now feel a great deal of nostalgia for Wii Sports. I recognize how good it was. I’ve been hungering for another for a while.

That meant the pressure was on when I went for a hands-on session with Nintendo Switch Sports, the new Joy-Con waggling revival. Here’s the headline, though: I loved it. It’s brilliant. It’s not revelatory, but it’ll probably be one of my favorite games of the year regardless.

The contents of Switch Sports feels like the result of a carefully-considered mathematical equation. Two sports return from the original Wii Sports (tennis and bowling), one returns from Wii Sports Resort (sword fighting, presented here as Chambara, which is a Japanese word to describe samurai movies), and three all-new sports.

While more sports will be added via DLC, I’d say the core launch package has everything you’d want from this sequel.

So how is it? Well, it’s fine! I wasn’t sure the Joy-Cons were quite as good at motion control as the Wii Remote, especially the later revision of that controller – but they certainly felt plenty accurate. The three returning games all feel very similar to how they did in their original forms. Sword fighting requires the most finesse, and basically becomes about reading the blocking stance of your opponent and working around it. It ‘just works’, and if the calibration drifts, there’s a two-button reset you can hammer at any point without interrupting the action.

The magic of Wii Sports was always that you felt more like you were playing the sport for real than you actually were. That’s why people were totalling their TVs and putting holes in walls because of the game; you’d get so into tennis that you’d stumble to stretch to reach the ball for a desperate lob shot – even though you don’t need to move your feet. In bowling, you might perform the full-blown motions of a throw in order to put the desired spin on the ball. All of that – the game’s X-factor magic that so many copycats failed to replicate – is still present here.

It’s present in the new sports, too. Badminton is fairly simple; a tennis-alike that at a basic level works the same as that game, but takes on a significantly different tone and tempo thanks to the difference in projectile, just as in real life. It’s fun, but it’s the one I have the least to say about.

Football is probably going to be the most talked-about sport, however. And here’s why: it’s basically Rocket League. I hadn’t really made this connection from just looking at footage of it, but the 2-on-2 format inside a walled-in arena that makes bounces as important as shots on target feels hugely reminiscent of that game. It’s Rocket League… without the cars! It sounds lame when you put it that way, but it’s anything but. It’s ridiculous fun – and actually quite fast-paced and thrilling, like Rocket League.

It’s also the most traditionally-controlling of the bunch where player movement is handled with the analogue stick. Kicks and ludicrous all-in headers are done with motions. I can see this being hugely popular and competitive online. On top of all this, you can use the leg strap from Ring Fit Adventure to allow for actual kicks – which is fun, but admittedly a bit of a gimmick. Kids will love it, though.

Last but not least is Volleyball, which is probably the game of the new trio with the most of that exaggerated, jump-inducing energy. It’s made up of a handful of movements; tipping the ball up for your teammate, jumping and spiking the ball to score, and jumping up to block. You don’t actually have to jump – you could play this sitting down if you wanted, simply making the desired hand motions – but you’ll inevitably get into it and find your feet leaving the floor. Due to the nature of how you can tip to your teammate in this sport, I think it’ll be the new four-player king – way more engaging and teamwork-focused than tennis doubles.

That feeling that’s exemplified in Volleyball is what carries these games. There’s something in them that inspires a subtly larger-than-life suspension of disbelief – and that’s what kicks the door down to feeling competitive over these silly, basic little mini games. Other changes are perfectly smart, like getting rid of Miis for equally caricatured buy far better-looking avatar characters (you can still import a Mii, which will get converted) – but what drives this game, what seals the deal, is that nebulous feeling. Nintendo has nailed that again.

Probably the best thing I can say after a couple of hours playing Nintendo Switch Sports is that I can immediately see how it’s going to fit into my life. I left the hands-on thinking about how my partner will love it, how it’ll probably be a staple at Christmas again, and how I have a group cottage holiday this summer where there will probably be a lot of this played when extremely drunk. When Nintendo gets these sort of lifestyle ‘event’ games right, they’re always a slam dunk – and while it’s not reinventing the wheel, Nintendo Switch Sports is pretty much exactly what I wanted.