No. 1 South County girls’ soccer finds a worthy opponent in No. 2 Colgan 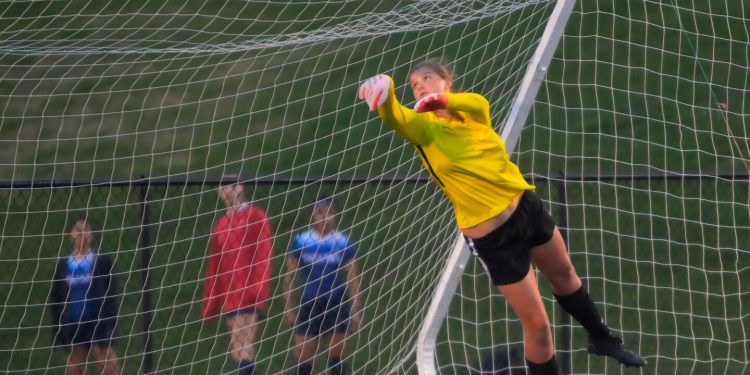 A few yards from goal, she ripped the ball to the upper left corner of the net. It was a remarkable shot, one that looked sure to break the evening’s stalemate. Instead, it was met by an even more remarkable save as Colgan’s Chase Rooney dove to her right and deflected the ball with a long, outstretched arm.

It was that type of match. The two best girls’ soccer teams in Northern Virginia battled to a scoreless draw on a blustery afternoon in Lorton.

“That game really tested our team chemistry, and it asked us to go all in,” Stallions senior defender Brooke Birrell said. “We became a better team because of this game.”

The Sharks controlled the run of play in the first half, with junior forward Samantha DeGuzman creating chances. But the script flipped at halftime as South County looked more dangerous in the second half and overtime. Mills’s close-range opportunity was one of several created by the Stallions in the game’s closing minutes.

The Stallions (5-0-1) returned eight of 11 starters and 16 players in total from last year’s undefeated state championship team. Coach Nina Pannoni likes to keep a big roster for this purpose, so that the transition from year to year goes more smoothly. In a title defense, that helps.

But while the Stallions might resemble last year’s group, they have to find their own formula for success. With that in mind, Pannoni said the focus of the season’s first month has been on building an identity and finding ways to grow.

“Last year we had a great run, and we’d love to continue that, but this is a different year,” Birrell said. “We want to build this team and make it even better. We’re starting over and creating a whole new thing.”

Colgan (4-1-1), similarly, is seeking to build on a young and talented roster. After reaching the region semifinals each of the past two years, Coach Tom Warzywak recognized the potential for this spring and scheduled a difficult nonconference schedule. The Sharks opened the season with wins over Prince William County contenders Patriot and Battlefield.