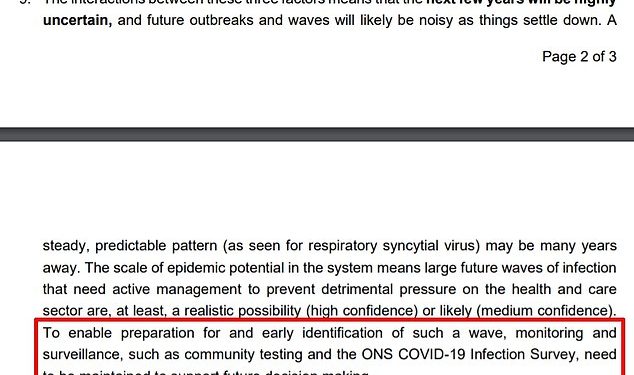 
Scientists advising the Government have urged ministers not to abandon free lateral flow tests, warning it could leave them in the dark when another Covid wave hits.

In meeting minutes published today, they called for community testing to continue for the ‘next few years’, which they warned will be ‘highly uncertain’.

The plea came from the Spi-M modelling group that feeds into SAGE in a meeting on January 26.

This was just days after Boris Johnson revealed plans to scrap free lateral flow tests by July. Leaked plans suggested the swabs would only remain routine in care homes, the NHS and schools.

Mr Johnson has also signalled he intends to scrap mandatory self-isolation and other basic measures that have been in place since early in the pandemic.

The Prime Minister is moving the UK towards ‘living with’ the virus, now that Omicron has roughly the same kill rate as seasonal influenza.

But Spi-M cautioned against the move, warning Covid might not settle down and become a seasonal illness for another decade.

Ministers had planned to scale back the current testing regime earlier, but Omicron’s emergence delayed this.

The scheme for free lateral flow tests has already cost the UK more than £6billion alone, with about 900,000 being dished out every day.

Several experts and the former chairman of Britain’s vaccines taskforce have called for mass testing to be dumped in the coming months. 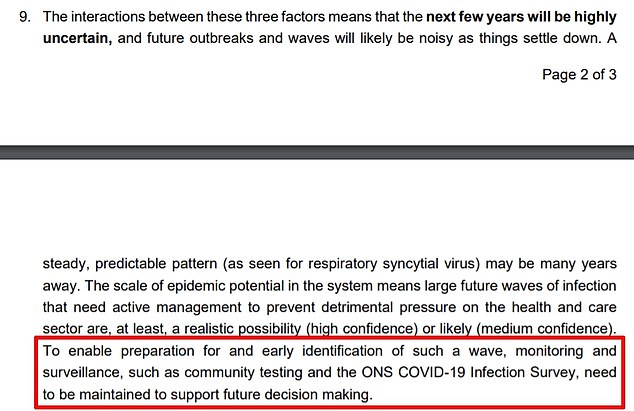 The above is an extract from the SPI-M-O meeting. It took place on January 26, a week after plans emerged to dump free lateral flow tests 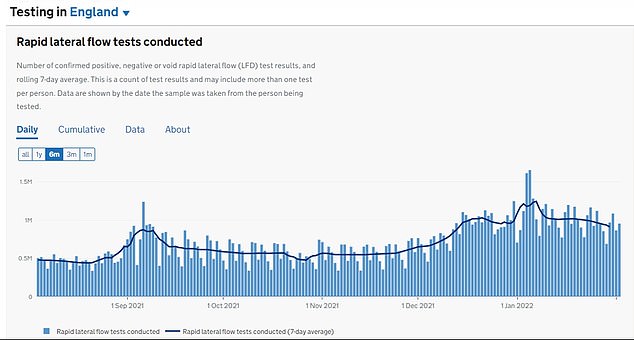 Lateral flow use remains high in England, however, amid the return of schools. Pupils are required to swab themselves once a week for the virus 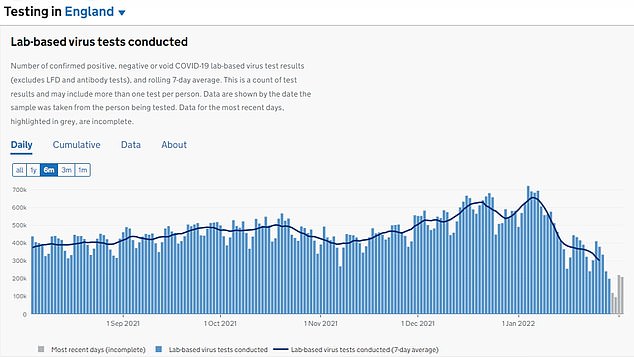 PCR testing in England is already on the way down, with half as many swabs carried out now as at the height of January when cases were very high

There has been no suggestion that free PCR swabs will go, although it is expected that they will be scaled back.

Mr Johnson is keen to shift the country to ‘living with’ the virus, with the legal requirement for someone who tests positive to self-isolate set to lapse in March.

Daily Covid stats to be ditched… but not until April

Daily Covid statistics are set to be dropped in April under the Government’s plan to live with the virus like the flu, it has been claimed.

Boris Johnson has already laid out his intention to scrap all remaining Covid laws — including the legal requirement for infected people to self-isolate — by March 24.

And a senior Whitehall source has claimed daily updates on cases, deaths and hospitalisations will be axed just weeks later.

Experts hailed the rumoured move, arguing the Government should also push forward plans to end mass testing. Free lateral flows are not expected to be ditched until July.

Professor Paul Hunter, an infectious disease expert at the University of East Anglia, told MailOnline ‘we have to stop producing the daily stats’ at some point.

Scientists at the Spi-M meeting, chaired by Professor Graham Medley from the London School of Hygiene and Tropical Medicine, recommended mass testing should not be abandoned.

They said: ‘To enable preparation for and early identification of such a wave, monitoring and surveillance, such as community testing and the ONS (Office for National Statistics) Covid Infection Survey, need to be maintained to support future decision making.’

In the minutes, the top scientists also warned the next few years would be ‘highly uncertain’ as Covid transitions to becoming endemic.

Flare-ups are still likely they said, before the disease settles down into a ‘predictable’ pattern similar to that seen for flu.

Some scientists believe Covid is now well on its way to becoming endemic, and say Omicron is a sign of this because it is milder than other variants.

But others warn that the virus could still throw up some ‘curved balls’, arguing the disease still needs to be closely monitored.

Chief among these is the ONS’ weekly Covid infection study, which ministers see as the gold-standard because it does not rely on people coming forward to get tested and uses random sampling.

When Omicron hit the UK, its publication was ramped up to twice a week to ensure officials could keep a close tab on the prevalence of the virus.

Government plans to dump free lateral flow tests were first reported at the beginning of January when virus cases had only just started to drop.

Education Secretary Nadhim Zahawi quickly went on the record to pour cold water over the claims, however, saying he was ‘puzzled’ by the suggestion.

Documents sent between the Department of Health and UK Health Security Agency showed an online ordering system would be ready by the end of July, they said.

Under the plans, Britons seeking the tests would instead be directed to private providers to buy their own swabs.

But it acknowledged some of those who expected to get a free test would react ‘negatively’.

Scientists have backed the move, however, saying it should go around the same time that the UK stops publishing daily Covid statistics.

Professor Paul Hunter, an infectious diseases expert at the University of East Anglia, previously told MailOnline it won’t be worthwhile to keep testing asymptomatic people in the next few months.

He said: ‘We still need to be able to offer testing to people who are clearly ill and so a move more towards what we now do for influenza seems appropriate.’ 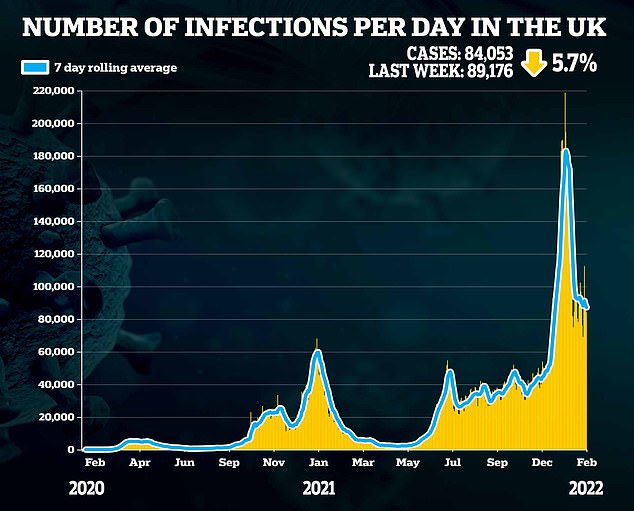 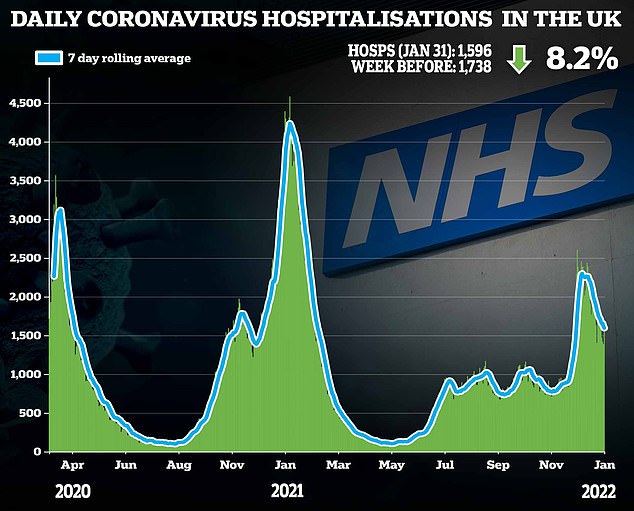 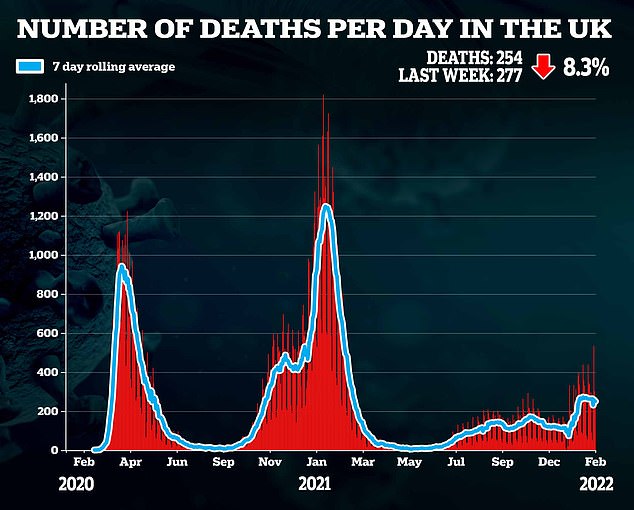 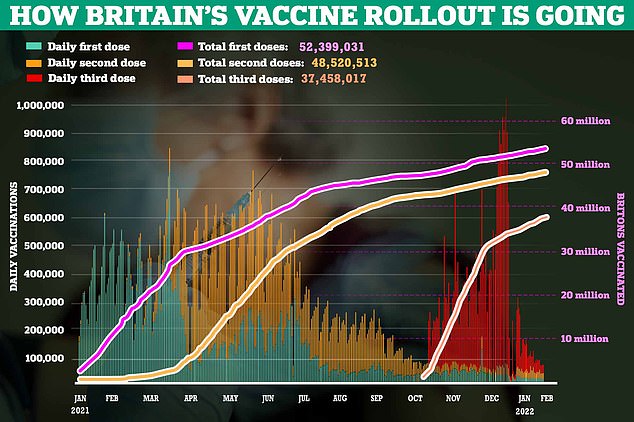 His comments were backed by Professor David Livermore, a medical microbiologist also at the UEA, who said April would be the right time to do away with both daily statistics and mass testing.

He previously said: ‘It is the right thing to do: Daily case statistics and mass testing both need to be wound down.

‘The virus has mutated to a milder form, and there is substantial population immunity from recent infection and vaccination.

‘Consequently, the infection-fatality rate is now little different from that of flu, and we don’t obsess over daily case rates for that, even in a bad winter.

Similarly, the former head of Britain’s Covid vaccine taskforce has also called for an end to mass testing.

Instead of testing, he said the UK should get to a point where a young person who is unwell should be allowed to stay at home until they get better.

Current rules state lateral flows should only be ordered by people not suffering from Covid symptoms or self-isolating, with those that are instead directed to PCRs.

It is unclear whether PCR testing could also be scaled back.

These swabs are technically only available to people who have Covid symptoms, but in practice those without symptoms can also secure them.

From the beginning of January ministers dropped the requirement for anyone testing positive with a lateral flow to also get a PCR to relieve pressure on the system.

England is currently carrying out about 910,000 lateral flow tests a day, barely a change from last week.

But this is down a quarter from 1.2million a day in early January as schools returned and virus cases remained high.

About 300,000 lateral flow tests are also being carried out every day, according to the latest figures to January 26.