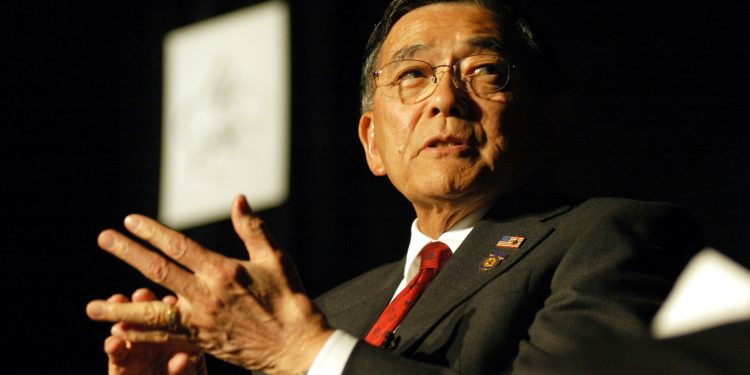 Norman Y. Mineta, a son of Japanese immigrants who was held in an internment camp during World War II and later became one of the country’s highest-profile Asian American political leaders, as a big-city mayor, a 10-term congressman and a Cabinet secretary, died May 3 at his home in Edgewater, Md. He was 90.

The cause was a heart ailment, said John Flaherty, his former chief of staff.

As a Democratic congressman and later as a Cabinet member under Democratic and Republican presidents, Mr. Mineta was widely regarded for his expertise in the byzantine policies governing the country’s highways, railroads and airports. In 1971, he was the first Asian American to lead a major U.S. city, his native San Jose, which was in the midst of a population boom.

During his tenure in Congress representing Silicon Valley from 1975 to 1995, he championed civil liberties and played a key role in obtaining an official apology and compensation for Japanese Americans who were forced from their homes during World War II when their ancestry made them objects of government suspicion.

Mr. Mineta had served briefly as commerce secretary toward the end of the Bill Clinton administration — becoming the first Asian American Cabinet member — and the incoming president, George W. Bush, tapped him as transportation secretary in January 2001. His career was most sharply defined by the terrorist attacks by al-Qaeda on Sept. 11, 2001.

After the second plane hit New York’s World Trade Center that day, Mr. Mineta, along with Vice President Dick Cheney, was taken to a secret bunker under the White House. There, Mr. Mineta made an unprecedented decision to ground all 4,638 planes in U.S. airspace. No emergency protocol had been established to bring them all down at once.

An underling reported to Mr. Mineta that pilots would be told to land at their discretion. That wasn’t good enough. “I didn’t want a pilot who was over Kansas City thinking, ‘Well, I will fly on to L.A., sleep in my own bed tonight,’ ” Mr. Mineta later said.

All planes were grounded within two hours and 20 minutes.

In the months afterward, Mr. Mineta worked 100-hour weeks to plug security holes at seaports, airports and railroad stations, and those involving oil and gas lines. He headed the effort to start a new agency, the Transportation Security Administration. The TSA, established by Congress on Nov. 19, 2001, grew bigger than the FBI, the Drug Enforcement Administration and the Border Patrol combined.

Within a little more than a year, the TSA — which in 2003 shifted to the new Department of Homeland Security from the Transportation Department — had replaced a patchwork of private security companies. The agency hired and trained tens of thousands of federal baggage screeners and implemented a set of strict rules that transformed the American airport experience.

“His calm hands at the reins after 9/11 is one of his principal legacies,” Michael P. Jackson, then-deputy homeland security secretary, told The Washington Post in 2006. “He just had the credibility to lead a team of people to do meaningful work at every nook and cranny in the Department of Transportation.”

Months after Mr. Mineta’s resignation in 2006, George W. Bush awarded him the Presidential Medal of Freedom, the nation’s highest civilian honor. San Jose’s airport had been named in his honor in 2001.

Mr. Mineta entered politics in the late 1960s as a San Jose City ouncil member. When he became mayor, the city was in the midst of a decades-long population explosion fueled by the burgeoning aerospace and service industries. Demand for city services jumped, and Mr. Mineta became intimately familiar with the problems of traffic congestion and the limits of the city’s transportation network.

He was frustrated that local officials didn’t have more say in how federal funds should be used to improve roads and railways, and he vowed to change that as a member of Congress.

First elected to the House in 1974, he sat on the Committee on Public Works and Transportation, a perch that allowed him to help bring billions of dollars home to California for highway construction and maintenance.

He played a key role in crafting and passing the Intermodal Surface Transportation Efficiency Act, a 1991 law that redrew federal transportation policy, placing new emphasis on public transit and signaling the end of the government’s single-minded focus on interstate highways.

“Expanding the role of transit and funding for transit — that was one of his signature contributions,” former congressman James L. Oberstar (D-Minn.), Mr. Mineta’s longtime colleague on the transportation committee, said in an interview for this obituary in 2011. (Oberstar died in 2014.) “The preeminent emphasis on highways was not going to get us out of the congestion morass which we were confronting increasingly as we completed the interstate system.”

In 1992, Mr. Mineta turned down the chance to become President Bill Clinton’s transportation secretary so that he could chair the House transportation committee, where he thought he could have a more direct impact on policy.

Two years later, a GOP tide swept a Republican majority into both houses of Congress, and Mr. Mineta lost his chairmanship. Soon afterward, he resigned his seat.

He spent several years as a Lockheed Martin executive before returning to public service as commerce secretary during the last six months of Clinton’s administration. When Bush won the disputed 2000 presidential election, he kept Mr. Mineta on as transportation secretary in a show of bipartisanship.

“There is no such thing as a Democratic highway or a Republican bridge,” Mr. Mineta liked to say.

Outside of his work on transportation policy, Mr. Mineta was best known for advocating on behalf of the approximately 120,000 Japanese Americans who were forced into internment camps during World War II.

More than 40 years after the war ended, he urged his U.S. House colleagues to issue a formal apology and “close the books on one of the most shameful events in our history.”

“We lost our homes, we lost our businesses, we lost our farms, but worst of all, we lost our most basic human rights,” he said on the House floor in 1987. “Our own government had branded us with the unwarranted stigma of disloyalty which clings to us still to this day.”

The Civil Liberties Act of 1988 authorized $20,000 in reparations for each surviving internee; it passed with support from both parties and served as an official recognition that the incarceration of Japanese Americans was wrong, a result of “race prejudice, war hysteria, and a failure of political leadership,” as a presidential panel had concluded.

In 1991, when the United States went to war with Iraq in the Persian Gulf, Mr. Mineta warned against targeting Arab Americans, saying he hoped the country could avoid sinking again into such racism and fear.

“The U.S. Constitution must not become a casualty of our conflict with Saddam Hussein,” he said at the time.

Later, as transportation secretary heading up security efforts after 9/11, Mr. Mineta fiercely resisted racial profiling in baggage screening lines. “I’ve been criticized for going after blue-haired grandmothers at airports, but I just felt very strongly about this,” he told a McClatchy reporter in 2006.

Norman Yoshio Mineta was born to Japanese immigrants in San Jose on Nov. 12, 1931, and was the youngest of five children. He was 10 when the Japanese bombed Pearl Harbor, drawing the United States into World War II.

In February 1942, President Franklin D. Roosevelt issued an executive order branding West Coast residents of Japanese heritage a threat to national security. They were ordered from their homes to one of several camps around the interior West, taking only what they could carry.

Norman was wearing his Boy Scout uniform and clutching a baseball mitt and bat when he and his siblings boarded a train in San Jose. He recalled a U.S. soldier confiscating the bat, calling it a deadly weapon.

The Minetas eventually were taken to Heart Mountain, Wyo., a makeshift settlement surrounded by a tall fence and barbed wire. “Some say the internment was for our own good,” Mr. Mineta later recalled. “But even as a boy of 10, I could see the machine guns and the barbed wire faced inward.”

Behind a WWII internment camp’s barbed wire, two Scouts forged a bond. It endured when they both entered Congress.

In Wyoming, Mr. Mineta struck up a friendship with a local Boy Scout named Alan Simpson, who came to visit the camp and later became a U.S. senator. Decades later, when Mr. Mineta sought a reparations bill in the House, Simpson sponsored a companion bill in the Senate.

“He came through all that with the camps by just rising above any kind of resentment or bitterness,” Simpson told The Post in 2000. “You look at the way he’s handled it and how hard he’s worked since then and you say, ‘There’s a person of depth.’ ”

Mr. Mineta stayed at Heart Mountain for 18 months before moving to the Chicago area, where his father — an insurance agent by trade — had volunteered to teach Japanese language courses to U.S. Army soldiers. Norman Mineta was a teenager when his family was able to return to San Jose.

Mr. Mineta graduated from the University of California at Berkeley in 1953 and then served for three years as an Army intelligence officer. He subsequently worked for his father’s insurance company in San Jose before being groomed by the city’s Japanese American community leaders for political office.

His first marriage, to May Hinoki, ended in divorce. In 1991, he married Danealia “Deni” Brantner, a flight attendant. In addition to his wife, of Edgewater, survivors include two sons from his first marriage, David Mineta of San Jose and Stuart Mineta of Redwood City, Calif.; two stepsons, Robert Brantner of West River, Md., and Mark Brantner of Johnson City, Tenn.; and 11 grandchildren.

When Mr. Mineta was serving in Congress, a Los Angeles man sent him a token gift to make up for what he had lost as a boy. It was a bat that had belonged to Hall-of-Famer Hank Aaron. It was worth $1,500 — more than the $250 a House member could accept, according to federal rules — and Mr. Mineta had to return the bat to its sender.

“The damn government’s taken my bat again,” he said at the time.