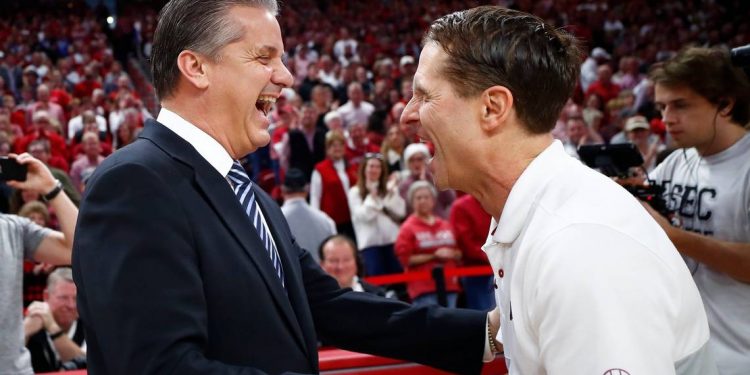 ▪ The coach making the most noise right now in SEC basketball has to be Arkansas’ Eric Musselman.

Fresh off back-to-back trips to the Elite Eight, Musselman secured a commitment from Anthony Black. The 6-foot-7 forward is the third five-star prospect to commit to the Razorbacks for 2022, joining 6-4 guard Nick Smith and 6-7 forward Jordan Walsh. Smith is ranked No. 6 for the class of 2022 by 247Sports. Walsh is 18th and Black is 22nd.

True, the Razorbacks are losing leading scorer JD Notae to the NBA Draft, but with the influx of talent, expect to see the Razorbacks near or at the top of the rankings once the AP Top 25 rolls around in November.

▪ Speaking of the transfer portal, the top player to hit the market entered the portal on Monday. That would be SMU guard Kendric Davis, who averaged 19.4 points and 4.4 assists for the Mustangs on the way to being named American Athletic Conference Player of the Year. The 5-foot-11 Houston native has one year of eligibility remaining.

▪ Florida basketball received a shot in the arm with news that Colin Castleton is returning for his fifth season. The 6-11 center averaged 16.2 points and 9.0 rebounds last season.

▪ Nick Lodolo is scheduled to start for the Reds on Wednesday versus visiting Cleveland. Lodolo is Cincinnati’s “other” top pitching prospect. The Reds’ first-round draft pick is ranked as the MLB’s 51st best prospect by Fangraphs. Greene is at No. 31 on the Fangraphs list.

▪ Only four defensive linemen in this month’s NFL Draft weigh more than 260 pounds, own a vertical leap above 35 inches and ran a sub-4.8 in the 40-yard dash. The four: Michigan’s Aidan Hutchinson, Georgia’s Travon Walker, Minnesota’s Boye Mafe and Kentucky’s Josh Paschal.

▪ With the Maryland Racing Commission announcing that Bob Baffert will not be allowed to race in the Preakness, the trainer is not only out of the Kentucky Derby but the entire Triple Crown.

The New York State Gaming Commission announced last week that it would reciprocate Baffert’s 90-day suspension handed down by the Kentucky Horse Racing Commission. He is banned from racing at New York tracks until at least July 2. This year’s Belmont Stakes is scheduled for June 11.

▪ Hiring Nolan Smith as associate head coach at Louisville was a smart move all the way around for new Cardinals coach Kenny Payne. Smith is the son of the late Derrick Smith, a vital piece of U of L’s 1980 title team. And after playing at Duke, Nolan Smith served as an assistant under Mike Krzyzewski for five seasons. He knows the ACC.

John Clay is a sports columnist for the Lexington Herald-Leader. A native of Central Kentucky, he covered UK football from 1987 until being named sports columnist in 2000. He has covered 20 Final Fours and 37 consecutive Kentucky Derbys.
Support my work with a digital subscription
Tags: AddingArkansasbasketballEricMusselmanNotespieces
Previous Post